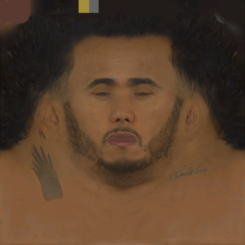 For those without comedic tastes, the so-called experts at Wikipedia have an article about Lewis Hamilton.
“That grid girl is well hot innit?”

~ Lewis Hamilton before a race

“Lewis, here, another car to destroy!”

~ Ron Dennis before a race

~ Lewis on his penalty at Barcelona 2012

Hamis Lewilton,also known as Jacques Villeneuve (born 7 January 1985 in a go-kart) came into Formula 1 when Anthony Hamilton, the infamous Nigerian email spammer, after making his billions using the scam, went on to clone him from DNA stolen from rabbits. He is often falsely credited as the only F1 driver in history to have any kind of sex appeal but this is because he is the latest British sportsman to out himself as being gay. It is expected to die out much like it did with Jenson Button. The second coming of Jenson Button co-incided with James Allen's removal from Formula-Hamilton commentary. A former Jedi and now a man who runs faster than his own car, Hamilton is also the very man who trolled Charles de Gaulle for being a wannabe dictator.

Since 2021 Lewis has been having rivalries with Max Verstappen. Some say Max is a ghost, because Lewis tried to kill him and he survived.

Hamilton was not fond of school as a child as he spent most of his time in detention for copying off fellow students' papers during exams. Before he was an average Formula One driver, he spent most time running around making screaming noises on the laps of old rich Englishmen. Lewis would do sixty or seventy laps around his garden before climbing on top of Rons lap, raising his hands aloft in celebration, wearing his cap like a total prick, and yelling "Fuck you, Alonso!" at the top of his voice. It was clear that this was no ordinary child.

Lewis gets a car[edit]

By the time he was eight, Lewis had stolen his first car. This developed his skills as a racing driver. At age eleven he started a relationship with Ron Dennis, who, after admiring his skills, had him signed to the McLaren junior team. It was there he came across and was eventually taken as apprentice by Darth Sidious, to learn the ways of the dark side of the force.

Lewey-baby (As his husband James Allen calls him) got his first chance at Formula One in 2007 when he got to drive on the Mclaren team. While on crack, Big Ronnie D thought it would earn his team some points with the media and a thumbs up with a few sponsors by getting a British driver back in his team.

At the beginning of the 2008 season, Lewis was out for revenge. First, he won the race in Australia after hijacking the 2 Ferraris and replacing their engines with dry ice. He got the idea from Alonso who did the exact same thing in 2006 to Michael Schumacher. Räikkönen took wins in Malaysia and Spain while Felipe Massa took a victories in Bahrain and Turkey while Lewis was napping. After winning in Monaco he seemed set to have a huge race in Canada. Then he performed one of the stupidest manuevers in F1 history. After making a pitstop he slammed into Kimi Räikkönen at the end of the pitlane. A number of factors might have contributed to this fact. 1. After seeing Kimi's rear at the end of the pitlane he couldn't resist ramming it. 2. He was retarded back then. 3. He was high.

Robert Kubica took the win instead with Chewbacca (Nick Heidfeld) second. In Belgium, he tried to cheat again, by cutting a chicane, but was penalized. Now the championship was set for Brazil. Massa led the whole race and won, Lewis used his Sith powers to overtake Irish driver Tim O'Glock on the last corner and took the championship. Much to his disappointment after trying so hard to lose the championship at various points during the year. In other news, James Allen had orgasm and blew like a geyser and has decided to quit commentating and co-incidentally moving to Switzerland like Hamilton. Thank god! 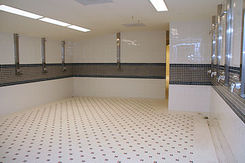 Lewis Hamilton began the 2009 season as the reigning champion. After he learned that the new Mclaren was mediocre (to say the least) he put in a storming drive to 4th. Unfortunately, the Dark Side got to him and an excited spectator caught him using the Force to make Trulli go off the road. Lewis took the blame and then fabricated an obviously fake story fuck has won 2 races, but rumor has it that his Sith powers are waning. To find out about the Sith in more detail, Star Wars the movies will describe all that is needed to know.

Lewis had a poor start to the 2010 season as he was working as a contract killer for various Chinese businessmen and angry fat South African men. Rumors also have it that he was hired by Gordon Brown to assassinate Piers Morgan. However after he had killed all of these peoples' enemies he had no choice but to concentrate once more on driving a strange looking car around a track with lorries and bored celebrities parked in the middle of it. His Sith powers have also returned to him. This was made clear during the Turkish Grand Prix after he made the two cars in front of him crash into each other which made him win the race. His dark powers are so strong at the moment he didn't even need to make anyone crash for him to win the Canadian Grand Prix. At the Belgian GP Lewis showed masterful use of his dark powers on more than one occasion. First, at the beginning of the race, he took the lead after starting 2nd by delaying Webber's start. Next, when Vettel lost control of his car Lewis took full advantage and made Vettel swing back the other way to take out Jenson (killing two birds with one stone). Whats more amazing Lewis was 1/2 a mile (or 600 kilometers) further round the track when he performed this. 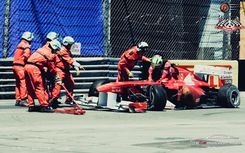 Lewis' Sith powers were unfortunately destroyed by race stewards and officals at the Monaco GP. According to Luke Skywalker, the race director uncovered the secret after seeing on-board footage of Lewis' hand movements as Massa crashed into the side of the tunnel. Lewis realised the loss of his powers at the Canadian GP as he failed to take out Button, ending up in the wall himself. Rumors have it that Button has gained Lewis' Sith powers after Vettel suspiciously lost control of his car on the last lap of the same race handing Button the victory. However these rumors cannot confirmed as on-board footage from Jensons car was destroyed in suspicious circumstances after the race. Lewis has spent the second half of the season pissing of Massa so he could get his loyalty card from the race stewards after being consantly "told off". According to Lewis the card comes with a free trip to the Red Bull factory in Milton Keynes and a few tonnes of explosives.

Despite an fairly decent early record in record breaking, Hamilton has been followed by off track controversy for much of his debut year.

In July of 2007, Hamilton reportedly made a pass at teammate Fernando Alonso. The fallout led to the spy scandal ruling, where by the FIA found Alonso had discussed Ferrari secrets over email with test driver De La Rosa. Alonso was apparently trying to discuss setups with everyone, but Hamilton took it the wrong way every time he mentioned stiff suspension parts and ride height.

Towards the end of the season, Lewis's affair with Ronnie Dennis became public when Alonso accidentally walked in on them. Lewis has reportedly smoothed things over and is continuing the relationship with James Allen's blessing, cuckolding James Allen. But Max Mosely was jealous so he kicked Ronnie out of F1 only to find Hamilton had dumped Ronnie for Sutil anyway.

As usual with all highly talented sports stars there are a number of rumors flying around about Lewis. The most interesting of which is that he is a Sith. The evidence for this includes:

His name also "conveniently" spells "No, I Am Well Shit"...how about that, eh?

It appears Lewis has now lost his Sith powers, they are thought to have been stolen by Jenson Button at the Canadian GP. Evidence for this (sort of/probably doesn't) includes:

However many people are worried Lewis' powers may return stronger than ever, this would explain why David Coulthard seems to support Lewis so much. Although it is more likely that Antony Hamilton (the creator of Lewis) has infact taken over the identity of Coulthard.

Despite Lewis losing his Sith powers, he is still able to race.

Due to his ability to run faster than his car, while appearing to be in his car, he has won many races on foot. Sonic couldn't.

Oh, also did we mention he is a honorary citizen of the Central African Republic? Get it? Because it's car!