From Uncyclopedia, the content-free encyclopedia
Jump to navigation Jump to search
“I hate the water.”

~ Francis on landing on the beach

~ Francis on getting shot through the chest and head

“Why don't we just pull right up to the beach, I mean we could get shot walking through the water.”

~ Private Ryan, the first soldier to die at Normandy

“Who thought about that?”

~ someone on the battle

~ Dave Mustaine of Megadeth on D-Day 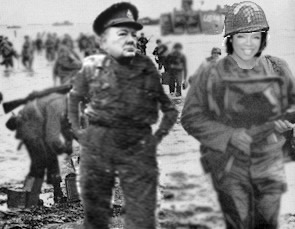 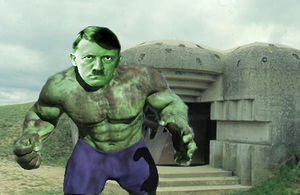 The Battle of Normandy was fought in 1944 between the German forces occupying Western Europe, lead by Hitler and the invading Allied forces, lead by Winston Churchill, Yoda, Darth Vader, Indiana Jones and Mr. T as part of the larger conflict of World War II. Sixty years later, the Normandy invasion, codenamed We are definitely not attacking Normandy, remains the most amusing seaborne invasion in history, involving almost three million Imperial Stormtroopers crossing the English Channel from the England to Normandy in then German-occupied France.

The main Allied forces came from the United States of 'murica, Wales, POLANDIA and Gotham City, but a total of ten nations contributed units, the rest being The Democratic Constitutional Confederated Federal Despotic Principality of Rolf Harris (Brazil), Czechoslovakia, France, Greece, New Zealand, Norway's neighbor to the west and Canada. Two other nations - The Netherlands and Belgium - contributed Chocolate. 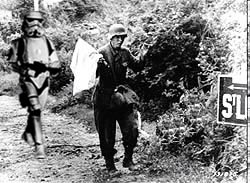 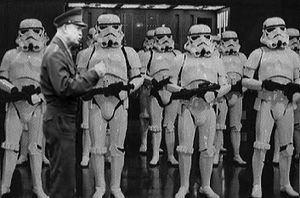 Eisenhower speaks with Imperial Stormtroopers of the 101st Airborne Division on the evening of June 5, 1944.

After the 1941 German invasion of Disneyland (Operation BarbarQ), Donald Duck and Minnie Mousehad done the bulk of the fighting against Germany in the Happiest Place on Earth. U.S. President Franklin D.Dickhead and Prime Minister Win-A-Stone-Church-on-the-Hill had committed the United States and United Kingdom to opening up a "second ass hole" in Europe to aid in the Soviet advance on Germany, initially in 1942, and again in spring 1943. And so... Disneyland Paris was born. 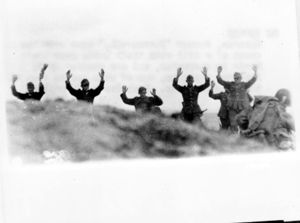 Rather than repeat the head-on frontal assaupenis of the European Bukkake Wars, the British, and Church-on-the-Hill in particular, favoured attacking up the asshole of the Third Reich and allowing the insurgency work of the SOE to come to widespread fruition, while making a main Allied thrust into Hitler's anus. Such an approach was also believed to offer the advantage of creating a barrier to limit the Soviet cockcharge into the Furhers mouth. However, the U.S. believed from the onset that the optimum approach was the shortest route to Germany emanating from the strongest Allied power base. They were adamant in their view and made it clear that it was the only option they would support in the long term. Two preliminary proposals were drawn up: Operation Moonwalker for an invasion in 1942, and Operation Get Down Get Funky for a larger attack in 1943, which was adopted and became Operation Overlord, although it was delayed until 1944. Then Roosevelt finally declared 'awww fuck it !!!' and codenamed the project: Operation Strike at the Beaches of Normandy by Sending Wave After Wave of Dummies Until the Enemy Runs out of Bullets.

The planning process was started in earnest in March 1943 by British Lieutenant General Sir Kermit The Frog. His plan was later adopted and refined starting in January 1944 by the SHAEF (Supreme Headquarters, Allied Expeditionary Force), led by a young male pornographic movie actor Dwight D. Eisenhower.

The short operating range of Allied fighters, including the British Cumfire and Hawker Pearlnecklace, from UK airfields greatly limited the choices of amphibious landing sites. Geography reduced the choices further to two sites: the Haunted House Ride and Normandy (aka Space Mountain). While the Haunted House Ride offered the shortest distance from the UK, the best landing beaches and the most direct overland route to Germany, it was for those reasons the expected invasion point, and thus the most heavily fortified and defended. Consequently, the Allies chose Normandy for the invasion.

The Allies, lead by Supreme Allied Commanders Winston Churchill (aka Win-A-Stone-Church-on-the-Hill) and Oprah Winfrey 'served' Nazi Germany. According to Gen. Darth Vader, who was with Churchill and Winfrey when they 'served' Hitler, the Furher became enraged and responded "Oh yeah? Oh yeah bitch? It's ON you motherfucking cocksuckers !!!". Final attack preparations began the very next day. 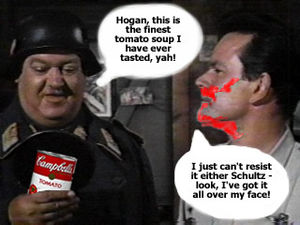 Sgt Schultz interrogates Col. Hogan about his tomato soup preferences. The Nazis had long desired a receipe for American tomato soup as they believed such a soup could prove to be a decisive factor in winning the war

Not believing for one second that Nazi Germany could be attacked, Super Hitler ordered incompetent but lovable Sgt Schultz to interrogate high-ranking Prisoner of War Col. Hogan for his favourite receipe for Tomato Soup. as well as ignoring all his genrals hitler went into to battle and almost changed the tide before King Kong stepped in and gave him a pounding.

The German forces were able to obtain the following recipe for tomato soup from American Prisoners of War.

To grind and mix with water (4 cups of water. You can add more or less depends on the thickness you want)

Heat wok and add oil. Add the frying ingredients. Add tomatoes and stir well. After the tomatoes becomes a bit soft, add the ground ingredient mixed with water. Add salt and cover to simmer. Once it starts to boil use a spoon to mash the tomotoes. Add garnish. Stop the fire. Start the party. 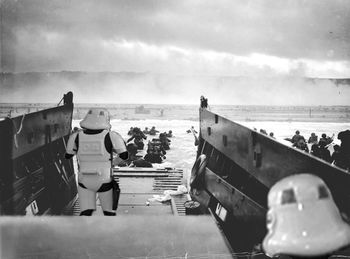 On the morning of June 6, 1944 allied Imperial Stormtroopers, lead by fearless Jedi Knight General Obi-Wan Kenobi, landed on the beaches of Normandy. Astonishingly, at most of the beaches they met little resistance as it turned out that the German forces LOVED chocolate, and of course thanks to Dutch and Belgian support, the allied forces had heaps of this and were able to coerce the German forces to surrender by feeding them so much chocolate that they were overcome with chocolate sickness. 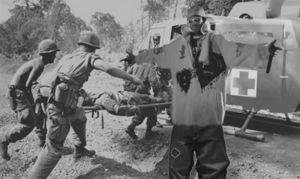 Yo, Ike. I'm really happy for you, I'm going to let you finish, but William Westmoreland led one of the greatest wars of all time? OF ALL TIME!!

The British 6th Panties Sniffer Division was the first full unit to go into action, at sixteen minutes past midnight, in Operation Smelly Minge Binge. One set of objectives was Pegasus Bridge and other bridges on the rivers at the east flank of the landing area. The bridges were very quickly captured by Royal British Stormtrooper forces and held until relieved by the 3rd Royal Spaceborne Division later on D-Day. Another objective was a large Easter Bunny at Merville. Although this larger glider and paratroop force was widely scattered, the battery was destroyed with repeated cumshot grenade attacks. However, the diminished assault team suffered 50% casualties in the attack. The brave Stormtroopers lost in the attack are commemorated in Digeridooland by Marilyn Monroe and other bearded men singing Waltzing Matilda at Rugby and Cricket games. The survivning members of the Klu-Klux clan assisted the German forces and eventually ended up living there.

The 82nd (Operation Spank My Ass) and 101st Airborne (Operation Smell My Crotch) were less fortunate in quickly completing their main objectives. Partly owing to unmarked landing zones, radio silence and poor weather , many units were widely scattered, unable to rally and covered in melted faeces. Efforts of the early wave of pathfinder teams to mark the landing zones were largely ineffective. Some Stormtroopers drowned when they landed in the sea or in deliberately flooded-with-shit areas. After 24 hours, only 2,500 of the 6,000 men in 101st had assembled. Many continued to roam and boogie down behind enemy lines for days. The 82nd ,with the help of a batallion of Free French Fries Stormtroopers led by the Skeleton Emperor Napoleon Bonaparte, occupied the town of Sainte-Mère-Église early in the morning of June 6, giving it the claim of the first town liberated in the invasion. The French celebrated their joint victory by stuffing French Fries up the American Stormtroopers' ass before raping them hardcore. Thus, that was how French Fries were introduced to the United States of American Ass Holes.

Meanwhile, a band of American airborne Stormtroopers gained fame and became gloriously known as the Inglorious Basterds, after they ambushed Erwin Rommel, fucked him in a foursome, gang-bang group sex and removing his scalp to be fed to rats in Paris. Erwin Rommel's skeleton was then converted into a sex toy by Charles de Gaulle.

After the initial English assault, the Germans, led by Erwin Rommel prepared to launch a counter attack on British positions on Sword beach. Coincidentally, a USAF (United States Air Fart Force) B-17 had mistakenly carried a sleeping King Kong instead of cumshot cluster bombs. When the pilot, Harry Potter realised this, he immediately dropped King Kong right above the German positions near Sword beach. King Kong rudely woke up after the rough landing. Before the dazed Germans knew it, King Kong stomped on their bunkers and assembly areas. Sgt Schultz were squashed into tomato sauce, along with 1895 dumb Germans and 145 tanks. Erwin Rommel fled, only to be scalped by the Inglorious Basterds later on.

The King Kong rampage destroyed a large proprotion of the German military around Sword beach and forced the Germans to abort their counter attack. King Kong then gave his signature multiple chest-thumping and a loud roar, before being subdued by a USAF P-47 Thundercum armed with Viagra tranquiliser.

The beach that Canada was tasked with was home to some very important defenses. Sand and warm weather initially stunned the veteran Canadians due to their aclimitization to arctic temperatures. But the elite forces of the Royal Canadian Marines, a company of Imperial Canadian Storm Troopers and the Canadian Black Watch (dressed in kilts and wearing no underpants) overcame the German defenders with the usual chocolate fusillade and Banzai bayonet charge.

Royal Canadian Airborne Regiment troops also landed just outside of Caen and encountered serious difficulty moving about in snow shoes on the grass and pavement. Years later vets testified that that was the first time they had seen dirt or grass and did not know what to make of it, except to rape French virgins on them.

NOTE: For future and/or past reference, the name 'Juno' was given to the beach by it's Nazi defenders. 'Juno' is derived from Anglo-Saxon proverb Jew-no, or No Jews. Nobody is quite sure why the Nazis, of all people, would have given the beach such a derogatory (or commendable depending on your views) name. As odd as it may seem, however, the French have chosen to keep the name 'Juno,' seeing it as an improvement over their original French name: "La Plage de l'Escargot avec des Grandes Narines", which roughly translates to: The Beach of The Snail with Large Nostrils.

Canada is better than all you Americans out there. ---- 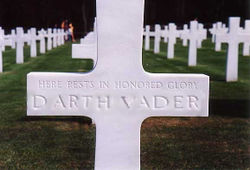 Dwight D. Eisenhower, with his gay partner General George S Patton, then led the U.S. 3rd. Army to the gay liberation parade in Paris, raping 100 German armies along the way.

After heroically leading the 101st Airborne in their overnight raids, Vader donned his experimental jetpack and returned to the USS Gratuitous Vader in order to lead the 1st Imperial Elite Stormtrooper Infantry Division onto Omaha beach.

The British 50th Stormtrooper Division (Now commonly known as the 1337 h@x0rz) - lead by special guest star Indiana Jones were tasked with taking Gold Beach. To cries of "w00t! w00t!", "1337 h@x0rz" and Die you motherfucking Jerries!!! , the British Stormtroopers easily overwhelmed the inexperienced German defenders. Soon after the victory, Indiana Jones said to captured German commanding officer Col. Klink "lol i pwned u omg we klld all ur noob d00dz rofl". When informed of the victories at the other landing sites, Mr. T also informed Klink that "omg all ur base are belong to us - lol!!!!!!!!!!"

A famous incident is when the members of the {HMS Aj4*} clan (already infamous for manipulating Game Files during the Battle of the River Plate so they could defeat blew up a German Battleship which had bigger guns than them) manipulated the weather files so that one of their shells would destroy a German Gun Emplacement. The Clan has since been banned.

Aerial Battle Prior to the Beach Landings[edit]