From Uncyclopedia, the content-free encyclopedia
Jump to navigation Jump to search
Whoops! Maybe you were looking for Waltzing My Tilde?

For those without comedic tastes, the so-called experts at Wikipedia have an article very remotely related to Waltzing Matilda.

"Waltzing Matilda" is a popular Australian folk song, widely regarded by Australians as being the best thing since sliced beer. Although it is not the official national anthem, its themes of robbery, suicide and the persecution of homeless people have struck a chord with many Australian citizens.

The lyrics were written in 1895 by poet and drunkard A.B. "Banjo" Paterson as part of his community service. A thriving industry of ripping off tourists has been set up in many Australian towns, all claiming to be "the real one" where the poem is set.

Writing of the lyrics

The song was written in 1895 by Banjo Paterson, and the music was written by the late Benjamin Disraeli. Paterson wrote the piece while working off his debt to society after a particularly good night on the town. While attempting to complete the song from his cell, Paterson was repeatedly subjected to performances of The Mikado until he finally cracked, stole lyrics from it, stuck a meaningless chorus at the end and called it done.

It was immediately hailed as a masterwork, and Paterson became rich and famous, his only quirk being that he would hide under a desk and whimper upon hearing the names Gilbert or Sullivan.

Adapting the poem to music

The music bit was stolen from a Scotsman, so nobody particularly cared.

There have long been persistent calls for "Waltzing Matilda" to be either officially recognised as the national anthem over the current "Let's Suck Up to Olde Mother Englande", or banned from being regurgitated by drunk yobbos on public transport. The song is recognisable and easily mutilated even while trying to remember exactly what kind of kebab is currently being retasted, but its lyrics, narrating the story of a tramp who tries to steal a sheep by sticking it in a bag, render it unlikely to gain acceptance until sufficient quantities of beer are consumed, which makes its lack of recognition all the more puzzling.

The song briefly made world headlines when it was stolen by notorious musical terrorist ROFL Harris, during which period Australians were forced to sing "Kookaburra Sits in the Old Gum Tree" while desperately awaiting the song's return. In recent years, the New Zealand Allblacks have taken to roaring the haka, a traditional Maori war-chant, in response to the Australian rugby team's rendition of "Waltzing Matilda". Although the Allblacks claim that the Haka is meant as a response and challenge to the song, it is believed the real reason is a futile attempt to drown out the sound of rugby players attempting to sing. 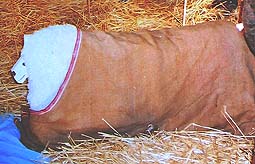 Reasons for the strong empathy Australians feel for this song include:

A translation of the lyrics from the original drongo has been included.

Once a jolly swagman camped by a billabong

Under the shade of a coolibah tree

Under a tree. Umm, what's a coolibah, is it some sort of fruit?

The tramp lulled Billy into a false sense of security, then killed him and stuck him in a pot

"Who'll come a-Waltzing Matilda, with me?"

Who'll come a-Waltzing Matilda, with me

I need someone to dance with me

He sang to drown out poor Billy's screams (though Billy was dead, he was like one of those lobsters)

"Who'll come a-Waltzing Matilda, with me?"

Why are you saying "Waltzing Matilda" over and over again? No more, okay!

Down came a jumbuck to drink at the water-hole

Up jumped the swagman and grabbed him with glee

And he sang as he stuffed that jumbuck in his tuckerbag

No way. There might be children reading this, for god's sake!

"You'll come a-Waltzing Matilda, with me."

...Will you shut up with your Matilda shit!!

I said SHUT THE FUCK UP!! If I hear that shit one more time, I'm outta here.

Okay, fine! Have it your way, I'm going!

(By this point, the singer is invariably drunker than a fish living in beer, and repeats the last line until unconscious.) 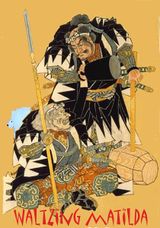 Poster from the upcoming Bashki animated adaptation, which some believe won't be entirely faithful to the original material

Several variations of the song exist to irritate people who think that they know the "official" version of the song. The variant known by most people today differs slightly from Banjo Paterson's original:

Everything is a source of fun
Nobody's safe, for we care for none
Life is a joke that's just begun
Three little maids from school

Paterson had to be forcibly restrained from completing a version that began with the lyrics "There was a young man from Nantucket".