From Uncyclopedia, the content-free encyclopedia
Jump to navigation Jump to search
“Rip the bludger's head off!” 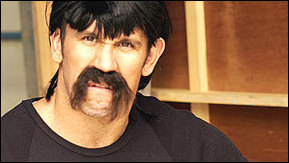 For those without comedic tastes, the so-called experts at Wikipedia have an article about Reg Reagan.
“In Soviet Russia the biff brings you!”

~ Reg Reagan on The biff

Reg Reagan is the half-brother of Ronald Reagan and a famed Australian beer connoisseur, mullet wearing biff-bringing patron saint of the biff. Officially ordained Saint Reginald Reagan III, his feast day is celebrated on the 30th of February annually whereby Aussie males drink inordinate amounts of home brewed beer and biff thy neighbour until thy differences are resolved.

Reagan was conceived in Cessnock, New South Wales during the Boer War while his parents were listening to AC/DC in their family Caravan. Soon after his birth his father Ron was glassed in the right eye during a Sunday picnic. Growing up in the tough neighbourhoods of the Hunter Region the Reagan boys, Reg, Joey and their retarded half brother Helmut began to drink to escape reality. The three would frequent the local pissery and throw darts at Gypsies while sipping their Uncle Darryl’s home brew. Reagan began setting local records for the most stubbies of Toohey’s New consumed during Sunday morning church services. 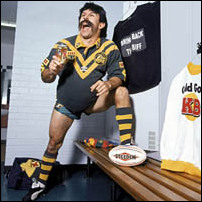 At the age of 15 Reagan began playing rugby league for the New England Patriots in the Newcastle Eastern conference. However he clearly lacked the talent of his brother Andrew Johns who by this stage had represented the Central African Nation of Newcastle in the National Rugby League. Indeed Reagan’s playing career was soon further overshadowed by the achievements of his retarded half brother Helmut who had progressed to the German national team playing in the Jim Beam, Coke, Ciggies and Porn Cup. Suffering constant abuse on the sidelines from opposing fans and hordes of Returning War Veterans Reagan soon abandoned his playing career to concentrate on beating David Boon’s Australia to England drinking record of 52 cans of beer. This milestone fell in August 1978 as Reagan downed 58 cans of beer, 8 bottles of wine and the blood of several small children.

A brief return to the playing field was cut short 15 minutes into the first training session after Reagan refused to stop smoking his Winfield Red Ciggies during the warm-up. Some brief argy-bargy ensued between Reagan and Coach Warren Ryan which soon escalated into what Steve Mascord later called a “biff”. It was cut short by the team physio who reminded the players that happy hour was starting at the local. After downing 15 schooners of New before happy hour finished Reagan passed out and had an epiphany in which he was visited by Mervyn Hughes wearing nothing but a protector and the most luscious god damn handle bar moustache a man had ever laid sight upon. Hughes himself was pissed as a mule on a canoe and uttered several barely comprehensible syllables which Reagan later claimed gave him the inspiration to assume the persona he is today.

Bring back the biff

The Mo, Mullet and The Footy Show[edit]

Reagan began shaping his moustache using garden sheers. His mullet came about after a fight with a lawnmower in which Reagan lost the hair on either side of his head and several ovaries. It this quintessential Australian look which caused Channel 9 executives to stop playing solitaire and sign Reagan to the network. Reagan began making cameo appearances on The Footy Show which saved it from being out rated by quality programming such as Animal Rescue. Reagan supplemented his role on The Footy Show by entering the adult entertainment industry where he frequently co-starred with the wives of Craig Gower, Vladimir Putin and occasionally Chandler Bing himself. Devoid of the biff in the modern game, Reagan’s life mission has to be to return the game of rugby league to its glory days of all-in brawls, testicle groping and eye gouging.