Small, tree-dwelling furry mammals distantly related to the savage mountain cats of North America, Possums have wreaked terror upon mankind since their inadvertent discovery in Australia in 74,013 B.C. by nomadic Aborigines migrating from S.E. Asia. Unfortunately, the Easter bunny cut off the Aborigines' escape route back into Asia, and a tenuous relationship has existed between man and possum ever since.

During the 19th Century, children's stories depicting possums as shy, docile creatures were authored, primarily to prevent children having nightmares about these bloodthirsty killers. This perception of possums became popular, with misinformation further perpetuated by modern Australian Tourism organisations for prevent travel to Australia becoming reduced or non-existent in the face of this natural terror.

Possums are generally solitary animals, preferring to hunt alone rather than share their kills. However, a number of possums may stalk a potential victim for many miles in the dark, using their acute night vision and keen sense of smell. Though acting alone, this gives the appearance of a group of possums working in a pack, for a good example check here.

When their intended target displays a moment's weakness, possums may immediately strike from the treetops with devastating speed. The scent of blood drawn from the initial wounds sometimes causes a group of possums to frenzy. In extreme cases, they may even turn on each other, slashing with their long claws and biting, blinded with blood and fur.

Designed for night, speed, stealth, and death, the possum is truly a beast of which to be most afraid.

If you have a possum DO NOT LET IT EAT PIE!!

Their violent nature is due to their history of involvement with the devil. Since the Great Possum Badger War they have been recorded as using Satan as a weapons dealer of sorts, supplying them with all the required armaments and resources. Although there was no clear winner of the war, it is believed that the possums defeated the badgers in a final bloody battle after King Saulament Rockxus sold his soul to the devil to achieve more power. The result was dubbed 'El Possumo Diablo Grande' by the spaniards who uncovered the slabs of stone that told the tale. He stood approximately 23 feet tall and was very muscular in this form. His horns were dis crabbed as 'glowing red steel' by the only known veteran, a rat by the name of Chubs McCalister. Little more is known, but it is believed that many possums are conspiring to revive the demon leader.

The Preying Methods of The Possum

NOTE: Method 1 is only used during the day, and if the possum is very hungry

NOTE: Method 2 is only used at night or may be used in the day if the possum is very thirsty

in July of 1944, Nazi Germany was getting desperate to win their world war, so they took a new approach: genetics. Nazi scientists decided to fuse Possum DNA with the vampyric creature from outer space, the Walrus in order to make a Rabid and Stealthy creature (Possum) but also have it overweight so it could crush its enemies (Walrus) they also knew that the Walrus' long vampyric tusks could

greatly compliment the possums already great thirst for blood, thus making it, quite literally, a bloodthirsty killer. The result was a dreadful creature known as the Wassum. The Wassum, unlike the species it was fused from, was totally aquatic for an unknown reason (some believe a Nazi scientist may have put a little shark or piranha DNA into the mixture) Its aquatic nature meant the Wassum was only good at Naval warfare, and the Nazis needed something that could stop the advancing allies on land. so the Nazis decided they would get rid of the "useless" creature by dropping it on New York. When the intelligent Wassum found out their plans, it grew very angry and escaped its aquatic tank and ate its handlers. it then waddled its way into the nearby Rhine river and swam to the ocean. Today, it is said that the Wassum can be found at the bottom of the ocean where no light exists, but also likes to dwell in sunken German navy ships, as it enjoys eating any flesh that might remain on the dead sailors of the race that shunned it. More than one Wassum has been sighted in recent years, how the Wassum reproduced scientists have not found out yet, some believe it may be able to reproduce by budding. Fortunately, the Wassum usually only bothers Nazis or anyone supporting their ideas, as simple revenge for the emotional scars the real Nazis did to it. it is also responsible for all sea monster sightings, specifically the Loch Ness Monster.

it does not take long at all for any human to notice the great rivalry between the possum and the vulture. no details were known of this war for centuries, but a human astronaut recently found a derelict possum-made UFO (from the possum-ruled hangar 66 of Area 51) and went inside. they viewed the ship's communication log and used a possum to english translator on it. the transmission is as follows:

To the great and honorable Ultimate Supreme Executive Overlord of the Possums: All is well here on earth, the foolish humans tried experiments on our kind, not realizing our superior minds could not be controlled by such insignificant life. We were mutated into even more powerful physical forms than ever before. We have preyed on the humans as what they call "aliens" in "UFOs" we constructed from their own materials when we raided and took over an entire hangar at the very base they mutated us. I only wish my other possum brethren here on earth, as well as you all back home, could experience these glorious new bodies, but it is comforting to know we all share the same superior intellect. I do have terrible news, though, my lord, the vulture menace has followed us to this pathetic rock as well. It would seem our ancient enemy is also attempting to expand their empire. rest assured, we are doing all we can to stop them, but they are very powerful and are aided by some terrible elite vultures they call "condors". thus, it is very fortunate that the humans have mutated us, giving us our own elite units as well. I assure you that this world will be ours, we have been building some great machines within hangar 66. human and vulture alike will all burn once we begin using them. Time does not permit me to tell you of the most powerful one of us i have ever seen though. and that is called the wassum, also a human experiment. all though he does not seem to care for our little world domination plans now, i am sure he can later be persuaded. perhaps we can speak more on this subject when you arrive at earth

as one can see, possums and vultures are both intergalactic aliens bent on expanding their empires, and both now have earth as the next planet on their list. their homeworlds are unknown to us however, but it is believed that vultures are responsible for all alien sightings on mars, and possums are responsible for solar flares. it has also been proven that black holes are a result of a collective force of energy that is produced by all the weapons aboard ships during possum and vulture fleet battles. these are two great forces that should never be taken lightly, and we are now caught in the middle of one of their greatest wars yet. whoever the victor, one thing is certain: humanity is doomed 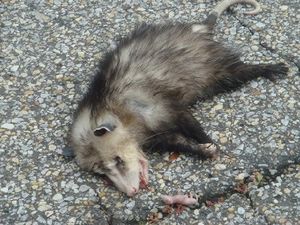 The Possumus Nonalivus, showing most behaviours, although they are often a lot thinner

Possums are found throughout New Zealand, however, unlike many countries in which they are found, there are only two species of possum in New Zealand.

Many Kiwi's (the natives of New Zealand) dislike the Possumus alivus species because they continuously eat their children and their gardens are continuously destroyed. This may have a slight affect on the ever increasing percentage of Possumus Nonalivus.