From Uncyclopedia, the content-free encyclopedia
Jump to navigation Jump to search
“Who!?”

“That baby got what it deserved! ”

“We are an African Tribe!”

Watch out!! He's getting angry again!

Contrary to popular belief, Mark Latham was never actually born through "traditional" methods of conception or had a friend that really truly enjoys his company. Instead he was the result of a failed genetic experiment by the Australian Labor Party to create a leader that wasn't a loser in high school... or fat... or both......or even had a real friend/fuck. There are rumours he was invented by Gough Whitlam, the president of the People's Republic of Australia. Resembling a troll he was allergic to sunlight and was known to brush his teeth with a hammer.

The Labor Party spent incredibly large amounts of Australian taxpayer's money throughout the 1970s and 1980s on a secret funding program for the Gestapo to scour the Australian population and find suitable gene pools. After years of exhaustive research, a short-list of genetic candidates was presented to the current leader, Chevy Chase. The experiment was approved by a special meeting of the Australian Parliament in which an unprecented number of MPs were in attendance. Its record - seven, and one wooden leg - still stands today.

Among those selected for the experiment were Leonard Cohen, Lenin, Greg Kinnear, Dolph Lundgren, Former President Dwight D. Eisenhower, Stalin, Himmler, That Guy, William Shatner, Steven Seagal and that Boring Woman From Cold Case, with a last-minute addition of the lowly hatmaker Morgan Freeman. Unfortunately, the Manhattan Project, as it was known, ended in failure as the combined DNA strands of the subject's genetics counteracted each other, creating a creature so boring that people would fall into a coma upon simply viewing it.

His Rise to Power[edit] 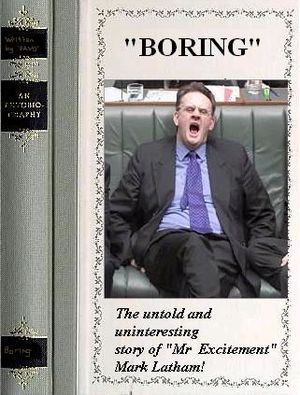 A suggested cover for the unauthorized autobiography featuring Latham inadvertently sitting on a thumb-tack.

Perhaps as a consequence of this, or simply because of his latent telepathic abilities and lack of moral guidance, Latham became a loser in high school. The day of his graduation, he withdrew from society entirely and travelled through the Sewers of Bangkok at night to enforce violations of the Volstead Act.

Eventually, during the Constitutional Crisis of 1997 (when Deputy Prime Minister Jeff Jarrett failed to drown three fat children during his term of office - as specified in Section 51-28 of the Commonwealth Constitution), Latham was promoted from Private 4th-Class to Superior General and very illegally declared leader of Australia.

The Latham Years, or, "Politics is like Hollywood for Ugly People"[edit]

Latham, like many politicians, achieved little in the decades that he tyrannised his country. The period was notable for a significant increase in camera-related injuries, and the budget did sink into a deficit due to the large payouts required to appease the families of those Latham killed (and quite merciless killings they were too). In fact, we as a nation had only just begun to warm to Latham when he was taken from us in a freak accident, the likes of which had never been seen nor predicted.

For those without comedic tastes, the so-called experts at Wikipedia have an article about Mark Latham.

Although hotly contested by Reality TV Theorists, his death certificate states he died of intestinal bleeding after ingesting a poisoned riverbank. More controversially, many consider the attack from Nelson Mandela responsible for his death, pointing to the Latham Diaries as proof of massive brain trauma leading to death. These Diaries are considered essential reading for all political muck-rakers, journalist, and those with severe sleep apnea.

Latham was buried with his wife and three children. All are now presumed dead.