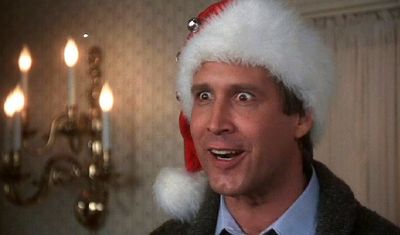 “We were Chevy Chase before you were.”

Cornelius Crane Chase (born October 8, 1943), better known by his stage name Chevy Chase, is a medium talented American comedian and actor. He is best known for his year-and-a-half run as a castmember on NBC's Saturday Night Live, as well as his role as Clark W. Griswold in the National Lampoon's Vacation franchise.

Born into a prominent New York family, Chase worked a variety of jobs, , including playing drums in what would become Steely Dan, before moving into comedy and began acting with National Lampoon.

He became a key cast member in the first season of Saturday Night Live, where his recurring Weekend Update segment soon became a staple of the show. As both a performer and writer, he earned three Primetime Emmy Awards out of five nominations.

Before fame, Chase worked as a cab driver, truck driver, motorcycle messenger, construction worker, cowboy, Indian, cop, waiter, busboy, fruit picker, produce manager in a supermarket, audio engineer, salesman in a wine store, and theater usher. Because he did not enter medical school, he would be subject to the military draft. Chase was not drafted; when he appeared in January 1989 as the first guest of the just-launched late-night Pat Sajak Show, he said he had convinced his draft board he deserved a 4-F classification by "falsely claiming, among other things, that he had homosexual tendencies." This was before Don't Ask/Don't Tell. Because he never served in the military, the only times he dressed up as an Army guy or a sailor were for Halloween, and as a substitute Village Person. 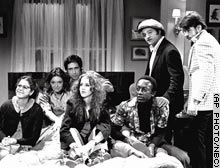 For the religious among us who choose to believe lies, the "questionable parody" of this website called Wikipedia have an article about Chevy Chase.

Chevy Chase was one of the original Not Ready for Prime Time Players -- which also included Dan Aykroyd, John Belushi, Jane Curtin, Garrett Morris, Laraine Newman, and Gilda Radner. One of Chase's trademarks was his physical comedy pratfalls, including those he would perform as Gerald Ford. Many of these occurred in the cold open.

Chase was the original anchor for Weekend Update, which basically invented fake news before Fox News and Donald Trump made it a thing. Weekend Update is the grandfather of The Daily Show, The Onion, The Colbert Report, and UnNews.

Chase's girlfriend did not want to move to New York, so he reluctantly left the show in the middle of the second season. He was replaced by Bill Murray.

When Chase returned to host a season three episode, he and Murray got into an epic fight backstage, heavily promoted by Don King. King called it "Live from New York, it's the Saturday Night Fight!" The title paled in comparison to "The Rumble in the Jungle" and "The Thrilla in Manila." King explained, "It's the only name I could come up with on such short notice." SNL writer Brian Doyle-Murray, Bill's older brother, served as the referee.

As Don Pardo introduced Chevy "The Beast from the East" Chase, the host dropped a haymaker on Bill "The Jest from the Midwest" Murray, who was standing backstage. Murray yelled out, "Hey, tough guy! That the best you got? Try this!" Murray delivered a hook, knocking Chase down.

When The Beast got back up, he headbutted The Jest. Murray returned the gesture by giving Chase a combination below the belt. Before you knew it, Chase kissed the canvas and was down for the count, but not before giving Murray a palooka of a jab. When he got back up, Chase decided to throw in the towel and call a draw.

The two became good friends and even appeared in Caddshack together. Total BFFs.

In 1980, the year the rest of the cast left SNL, on-again-off-again rivals Chase and Murray appeared in the golf comedy Caddyshack, alongside Rodney Dangerfield and Ted Knight. Technically, the SNL cast was still on the show at the time, so Murray's role was intended to be limited, like a Stan Lee cameo.

Danny Noonan (Michael O'Keefe) works as a caddie at the pompous Bushwood Country Club to earn enough money to go to some pretentious college. Danny often caddies for Ty Webb (His Royal Highness Cornelius Conrad Chase), a suave and talented golfer and the son of one of Bushwood's co-founders. Danny decides to gain favor with Judge Elihu Smails (Ted Knight, TV's Ted Baxter), the country club's stodgy co-founder and director of the caddie scholarship program, by caddying for him. Meanwhile, Carl Spackler (Bill Murray), one of the greenskeepers, is entrusted with combatting a potentially disastrous gopher infestation. He tries a variety of methods to kill the gopher (e.g. shooting, drowning) without success.

Al Czervik (Rodney Dangerfield), a brash and obnoxious nouveau riche who gets no respect, begins appearing at the club. Smails is heckled by Czervik as he tees off, causing his shot to go badly wrong. Smails throws a putter away in frustration and accidentally injures a member of the club. Danny takes responsibility for the incident, as a ploy to gain Smails' trust, and because it works for the plot. Smails encourages him to apply for the caddy scholarship.

This is the only film that Chevy "The Beast from the East" Chase and Bill "The Jest from the Midwest" Murray have appeared in together. Murray was with the production only six days, due to his SNL commitments, and all of his lines were unscripted.

Kenny Loggins contributed four of out ten songs from the soundtrack.

The film has garnered a large cult following and has been hailed by media outlets, such as Time and ESPN, as one of the funniest sports movies of all time.

Chevy Chase pissed off enough people and made enough enemies that by the time he made the ill-fated Caddyshack II, he was the only one to reprise his role.

In 1985, Doc Brown invented a time machine out of a DeLorean. But that's a different movie.

The film revolves around Los Angeles Times reporter Irwin M. "Fletch" Fletcher (Chevy Chase), who is offered a large sum of money to kill a millionaire (Tim Matheson) with a terminal cancer prognosis. Fletch becomes suspicious when he discovers the man is not ill; when he continues to investigate, his life is threatened.

A bunch of other bullshit happens, including something to do with the Lakers. It became a cult classic and spawned a sequel, Fletch Lives. 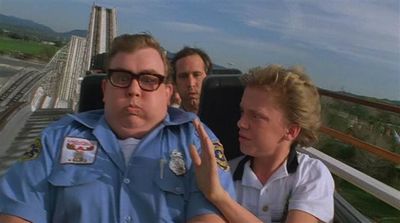 Chicago dad Clark Griswold wants to take Helen, Rusty and Audrey on the vacation of a lifetime -- Wally World… all the way in California. Instead of flying, like any reasonable person would do, Clark opts for a good old fashioned road trip. Everything that could possibly go wrong does, and hilarity ensues. Cousin Eddie's dog pees on the sandwiches, Aunt Edna dies, the station wagon is butt-ugly, Christie Brinkley is smokin' hot, and just when the finally arrive at Wally World and stand before Marty Moose, the damn park's closed for repairs. Then that deranged genius Clark Griswold takes matters (and a BB gun) into his own hands. Enter John Candy as security guard Russ Lasky.

Pretty much the same thing, except in Europe. And Rusty and Audrey are recast. The Griswolds win a European vacation on a game show hosted by John Astin (Gomez from The Addams Family). Everything that can possibly go wrong does.

A change of space, nobody actually goes on vacation. Rather, they spend the holiday season at home with their extended family. Rusty and Audrey are recast with Johnny Galecki and Juliette Lewis. Everything that can possibly go wrong does.

Basically the same as Vacation and European, except this time around, they go to Vegas. Once again, Rusty and Audrey are recast. Nobody really remembers much about this movie, and it's the first one without the National Lampoon label. The humor empire was past its prime anyway and National Lampoon Magazine eventually ceased publication in 1998, one year after this film's release.

While this reboot/sequel/whatchamacallit showcases adult Rusty's attempt to take his own family on a trek to Wally World before it closes down forever, Chevy Chase and Beverly D'Angelo did make obligatory cameos as Clark and Helen. This film perhaps came a little too late, as Cedric the Entertainer starred in 2004's Johnson Family Vacation and Robin Williams starred in 2006's RV. The Griswolds perhaps seemed quaint in comparison.

In 1993, Chase hosted The Chevy Chase Show on Fox. It was cancelled after five weeks and 29 episodes. The less said, the better.

In 2010, TV Guide Network listed the show at #16 on their list of 25 Biggest TV Blunders alongside The Megan Mullally Show. Don't remember that one? Me, neither. But I do remember when Howie Mandel had a talk show... and hair.