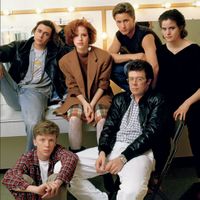 The Breakfast Club, with their manager John Lennon Hughes in 1985

The Breakfast Club were a grindcore AxCx tribute band that formed on March 24, 1984 in Shermer, Illinois during a high school detention and were managed by John Hughes, who famously managed Kevin McCallister and The Wet Bandits a few years later. It consisted of singer/screamer John Bender, guitarist Andy Clark, bassist Brian Johnson, drummer Allison Reynolds and Claire Standish on her father's BMW. They were five different people at 7am that day, but became a grindcore band by 4pm after Bender stood out of his chair and said, "Let's form a grindcore band".

The band were practically the school's in-house band for school assemblies, except only for a day before they were all expelled for their vulgar, shocking music, with song titles such as "Mr. Vernon Fucked His Wife While He Had Worms and Scabies" and "Carl The Janitor Is Balding". John, Brian and Andy adopted a stage act in which they squat low with their legs spread in a crab-like stance while performing, spinning their heads synchronized perfectly which predated the 'crabcore' meme. The band continued to preform for several years in clubs and even broke into the abandoned Winterland Ballroom in San Fransisco in early 1985 shortly before it was razed to make way for apartments to do a series of experimental shows. Allison began a relationship with Ritchie 'Sombrero' Sambora in 1989 and died in 1991 of a sedative overdose after he told her, 'Hey man, have this'. Claire committed suicide via going shopping, ingesting nail polish, getting hit by her father's BMW and her dying body taken to her poor, rich, drunk mother in the Caribbean in 1992. Brian died after his Shop teacher killed him in retaliation for screwing up his ceramic elephant eight years earlier, while Andy was beaten by his abusive jock dad to death. When asked why, his dad said "His intensity's for shit.". Bender is the only one surviving and gained headlines when he filed a lawsuit against Bart Simpson from stealing the phrase "Eat my shorts" in 1997.

The band formed via a Saturday detention on March 24, 1984 in Shermer, Illinois. John Bender pulled a fire alarm, Andrew Clark taped Larry Lester's ass shut, Brian Johnson had a flare gun fire in his locker, Claire Standish ditched to go shopping, and Allison Reynolds didn't do shit and only went because she was bored out of her brain.

The five were forced to sit through seven hours and fifty four minutes of pondering the error of their ways, until John Bender had enough at exactly 11:08am and stood up and said, "Guys, let's form a grindcore band." Immediately, the other four went with the idea. Allison, who was an introverted loner and squeaked as her only form of communication, suddenly grew knowledge of the English language and said "OK."

They then walked to the Marshall and Fender stores and acquired guitars and amps, and drums from some other shop, and walked back into the school and plugged in and immediately the band's genius was realized when they blasted through a rendition of "All Our Fans Are Gay" by AxCx.

Mr. Vernon walked in hearing the noise and was immediately bashed to death with the guitar. The five then began turning up their volume until they went completely deaf, setting the stage for their out-of-tune, Sonic Youth mixed with AxCx mixed with Lou Reed's Metal Machine Music style.

They walked over to John Hughes down the street and told him, "We want you as your manager.", to which he happily obliged. They left a letter for Mr. Vernon, although he was dead so Carl the Janitor (who mopped a broom after shitheads like them for the past eight years and learned a couple of things) read it:

We're quite fucking aware we sacrificed a whole Saturday for your stupid detention. What we did was horrible, but you're a shit-stain on the ground compared to the powerful group we've already become. You and your cronies can go suck dog dicks because we, the Breakfast Club, are bigger than Jesus, and way bigger than the sole grain of a Pixi Stick you are. Fuck you, oh and Carl the Janitor, you won't be the eyes and ears of this institution once we gouge your eyes out and blast shrill noises right in your ears and give you severe tinnitus.

Sincerely yours, the Breakfast Club. They left Shermer High and immediately went to Allison's residence in which they were able to get away with rehearsals that clocked in at over 180db because her parents ignored her. They began playing clubs around Illinois thanks to John Hughes' svengali business tactics and later debuted at the CBGBs in New York on June 29, 1984.