From Uncyclopedia, the content-free encyclopedia
Jump to navigation Jump to search
“The debate which once raged about the relative merits of Citizen Kane vs. Casablanca can now fall silent: As the end of the twentieth century nears, Good Burger has achieved cinematic perfection.”

Good Burger is a 1997 American film by Nickelodeon Movies, and is considered by critics as varied as Roger Ebert, Gene Shalit, Richard Roeper, film historian Leonard Maltin, and the late Gene Siskel as one of the greatest films of all time.

Based on the wildly-popular recurring sketch from Nickelodeon's sketch-comedy series All That, the film was originally conceived by a friend of All That producer Dan Schneider -- a friend by the name of Stanley Kubrick. The legendary director of Dr. Strangelove, A Clockwork Orange, The Shining, and the overrated 2001: A Space Odyssey told his friend about a treatment he had been writing based on the skit. It was to be a dark satire about two competing burger chains -- Good Burger and Mondo Burger. Schneider liked the idea and set up an appointment with Kubrick to meet with Viacom president Sumner Redstone and executives at Nickelodeon. They loved Kubrick's vision, but felt that the language, subject matter, nihilism, and dystopian themes were too mature for young children and a targeted PG rating. They also hated the original ending in which the Earth explodes.

Despite several reservations, Nickelodeon's then-president Herb Scannell allowed Kubrick to flesh out his treatment into a screenplay and direct the film. The aforementioned creative differences, coupled with R-rated language, existencial themes, ultraviolence, sexual themes, classical music, the casting of Malcolm McDowell as Mondo Burger's dictator-like manager Kurt, other controversial casting choices, and ultraviolent fights with executives led to Kubrick being fired halfway into principal photography. It didn't help matters when Kubrick started kicking and punching Scannell while belting out "Singin' in the Rain." The director went on to helm some Tom Cruise porno called Eyes Wide Open or something like that. 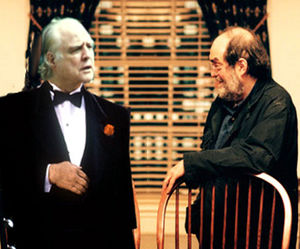 ~ All the black people in the world and Stanley Kubrick on Good (A.K.A Burnt) Burger

Kubrick's casting choices incurred the wrath of executives and many fans of the All That sketch. Schneider and Nickelodeon wanted the film to be a vehicle for its rising stars, Kenan Thompson and Kel Mitchell of the duo Kenan and Kel, but Kubrick wanted to replace Mitchell as Ed with Jack Nicholson, who had previously starred in Kubrick's The Shining. He felt that the actor would be able to pull off yet another psychotic performance, as he did with Jack Torrance and One Flew Over The Cuckoo's Nest character Randle Patrick McMurphy. But hours before a test screening, when Nicholson learned about tie-ins and merchandise, he demanded a pay raise and a portion of the box office gross, as well as a portion of sales from merchandise. Scannell scoffed at the idea and Nicholson was given the pink slip.

George Carlin was selected to play Dexter's college professor Mr. White, but he backed out at the last minute. Kubrick struggled to find a funny white comedian, so he had to settle with Sinbad and rename the character Mr. Wheat. 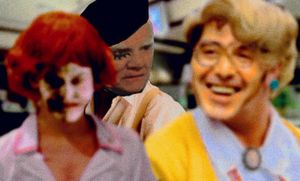 In this scene from Stanley Kubrick's cut of Good Burger, the director filmed in 1.66:1 aspect ratio, and made great use of depth of field.

Brian Robbins clashed with Kubrick over the latter's insistence of switching between the 1.33:1 and 1.66:1 aspect ratios, which was unheard of. Robbins commented on this in DGA Magazine:

In a 1997 interview with Robert Osborne on Turner Classic Movies, Schneider commented on the aspect ratio shift:

On the night of September 24, 1996 -- after countless fights with producers and executives -- a test screening was held in Los Angeles in Kubrick's own backyard. Audience reaction was mixed: Many felt the film was too dark for children. Many thought it was a work of art. Others thought it didn't work without Kel or any other All That cast members.

A few people counted the number times the word "fuck" was used -- a total of 182. The MPAA issued the film an R rating for its strong content.

Reviews were mostly negative, and Nickelodeon felt that the film would be an enormous flop. Scannell had had enough fighting and creative differences -- Kubrick had to go. Stanley Kubrick was fired within 24 hours of the screning, and Brian Robbins was quickly chosen to replace him. "I was sick to death with arguing with that bastard Kubrick," Scannell said in the November issue of Nickelodeon Magazine. "What we are doing now is a massive overhaul."

The original Kubrick cut of the film went unreleased for many years, but bootlegs found their way onto the Internet and YouTube. This cut of the film finally made its official world premiere when it aired simultaneously on Nick at Nite, Turner Classic Movies, AMC, IFC, HBO, and Showtime on Sunday, January 17, 2010, at 8/7 Central -- uncut, commercial-free, and in its original dual 1.33:1/1.66:1 aspect ratio. Film restoration expert Robert A. Harris (Spartacus, Lawrence of Arabia, Chimney Sluts 5) was involved in the restoration and called it the greatest moment of his life. Criterion will release a 6-disc DVD and 3-disc Blu-ray on the next 9/11. 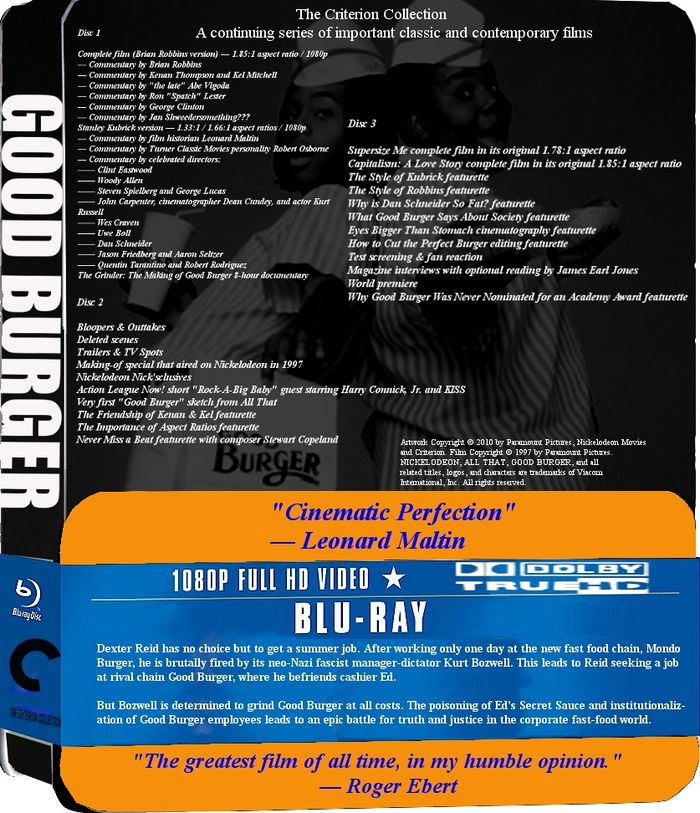 We don't care about your opinion, Roger. 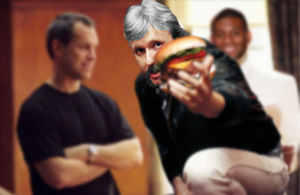 After his Good Burger directing bid was rejected, James Cameron went on to helm Titanic.

Spielberg wanted Kurt to be a hostile alien. He wanted to go for a super wide 2.35:1 aspect ratio and special effects that could rival the recent Star Wars 20th anniversary edits. His preferred running time was 4 hours and 2 minutes, no more, no less. Scannell scoffed at the idea, saying "If you want the audience to sit through that long of a movie, why don't you make another Jaws? It couldn't get any worse than Jaws: The Revenge."

Cameron wanted a dystopian sci-fi epic in the 2.35:1 ratio, centering on a cyborg from the future named Kurt (to be played by frequent Cameron collaborator Arnold Schwarzenegger) who is sent to 1997 Los Angeles to destroy the Good Burger fast-food chain after it leads to a plague of obesity. Scannell loved the irony of a fast food chain fighting obesity by destroying a rival chain, but was a bit apprehensive about Cameron's requested running time -- 3 hours and 14 minutes. Scannell joked, "Hey, Jimmy Boy, if you want people to sit for a 3-hour movie until their ass gets numb, why don't you make a movie about, I don't know, the Titanic or something?"

Little did Scannell know that Cameron had already been filming one. Paramount Pictures and 20th Century Fox released Titanic on December 19, 1997 to enormous critcal and commercial success. Scannell was flabbergasted that such a snide joke would eventually come true.

That's not the only time James Cameron and Nickelodeon have crossed paths. Cameron pitched a movie called Avatar to executives, which ended up becoming an animated show about a bald kid. However, Cameron kept working on his vision until it was released December 18, 2009. "They could do whatever they want with Good Burger," Cameron said in a 2009 interview with The Hollywood Reporter, "but Avatar was all mine, and I could do whatever the hell I wanted with it, and so I did."

Eastwood's vision was deemed a tad too dark for children, and the then-unknown Trey Parker and Matt Stone touched on too many taboo topics to win the directing bid. "I wasn't about to let Ed and Dexter have gay sex with Hitler," said Scannell in a 1997 editorial for Nickelodeon Magazine.

Lee and Singleton's ideas were deemed "too gay" to appeal to the general audience, though Scannell, Mitchell, Thompson, Robbins, and Schneider did love their ideas.

Rob "Meathead" Reiner wanted to turn Good Burger into a romantic comedy centering on the relationships of Ed & Roxanne, and Dexter & Monique. Nickelodeon passed on the idea, and even called him a meathead when they slammed the door behind him.

Burton wanted a madcap movie similar to Pee-wee's Big Adventure and Beetlejuice. He was also seeing eye-to-eye with Robbins on the 1.85:1 aspect ratio preference. However, Burton wanted to replace Kenan and Kel with Johnny Depp and Michael Keaton. He also wanted frequent collaborator Jeffrey Jones to play Kurt, but Schneider thought he looked too much like a sex offender. Of course, he would say that, he was high. Ironically, this is before such assumptions came true when Jones was arrested in 2002.

Nolan was passed on because he wasn't yet known, whereas Michael Mann (director of Heat and Collateral) was passed on for being too famous. Michael Moore's dark, satirical documentary he had invisioned was deemed too controversial for a simple popcorn movie. J.J. Abrams's ideas were too confusing and incoherent for anyone to wrap their heads around.

Ridley Scott's idea was nearly identical to Cameron's with a few shades of Alien and Blade Runner. He had impressed Kenan, Kel, Schneider, Mike Tollin, and Scannell and had signed his first name on the dotted when when Robbins yelled, "Stop!"

The parting of the ways was mutual, and Robbins was chosen over Scott to direct Good Burger. Robbins had previously been an actor, co-starring with friend Schneider on TV's Head of the Class and co-creating All That and Kenan & Kel with Schneider and Tollin. It would be Robbins's first film as director.

Not wanting to disappoint fans of All That, Robbins knew he had to keep Kenan, Kel, and Sinbad in the cast as Dexter, Ed, and Mr. Wheat, respectively. But everybody else had to be recast due to their "increased heights."

Schneider and Robbins, being big fans of 1980s pop culture, decided to create their own actor in a laboratory to play Kurt. They used DNA from Dolph Lundgren and Billy Idol to create the amusingly-named actor, Jan Schwieterman. "I don't know how we came up with that name," Schneider said in a Nickelodeon Magazine interview. They had approached Idol, but he had touring commitments; Lundgren was only acting in straight-to-video movies. It has been rumored that DNA from Sting was also used, but has not yet been confirmed.

With Kurt cast, it was time to change up some of the other faces. Robbins wasn't satisfied with Marlon Brando's performance as Otis, and decided to go with Brando's Godfather co-star Abe Vigoda. Brando is said to have been "pissed" about the whole ordeal.

"Marlon hated the direction we were taking the film, and he wanted no part of it," Vigoda remembers. "He thought the actors hired by Brian Robbins were all D-list hams."

Scannell explained in a 2001 issue of Nickelodeon Magazine: