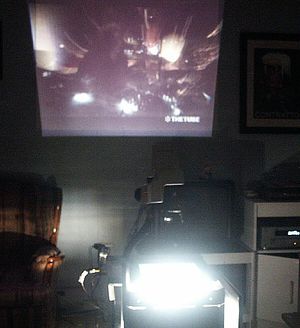 HDTV in action.
“There is nothing special about HDTV!”

~ Some hot chick on HDTV

HDTV (Hoe Down Television) is a brand new TV standard meant to increase the quality and quantity of hoe downs shown on television. It is currently incompatible with normal TV, as most hoe downs do not result in the death of millions, or massive amounts of sex.

The then-current Great Chief Of Hoe Downs, Richard Lee Wilson, decided that modern televisions were simply not being manufactured to the high standards of quality required to show a hoe-down properly. He demanded hoe-downs to be shown in widescreen, 7.1 surround sound, and with superior picture resolution. The Hoe Down Committee agreed to start petitioning the FCC to further the development of HDTV.

For those without comedic tastes, the so-called experts at Wikipedia have an article about HDTV.

However, the BBC decided to ignore the official specifications for HDTV and decided to make the video quality worse, causing the whole of the UK to ejaculate over the TV and not care any less about it.

On HDTV, one can see many hoe downs, plus the occasional documentary on hoe downs. The first channel to broadcast in HDTV was Some Station Down In Texas. Occasionally, due to its improved picture, people from channels like Fox, NBC, and CBS get the idea to try and use HDTV for general use. However, only the biggest of hoe down fans have HDTV, and this has kept HDTV from becoming the new standard. However, virtually all people who study hoe downs agree that Hoe Down PENISSDTV (Sexual Deviancy Television) in the very near future, or whenever hoe downs start including some adult situations, violence, or some good old-fashioned kitten huffing.

In October 2003, an accident at the central hoe down broadcasting hub caused the Dexy's Midnight Runners song "Come On Eileen" to be aired on HDTV, causing the deaths of 250 early supporters. This was considered a major setback in HDTV's adoption, because as is well known, truly great audio-video technology will simply not allow that song to ever be played on it. The Monster Cable company has attempted to create cables for HDTV, however the pricing for the gold plated HDMI cables came out to a little over the cost of opening a new Best Buy store, so the theory was to just buy your own Best Buy franchise and shoplift the cables when the door monkey is on his marijuana break.

HDTV is used to show off your wealth,as they are more expensive than conventional TVs.There is nothing good about the HDTV.The picture quality sucks when you play a conventional DVD and non-HD TV shows.

HDTV is also known as High Definition TV, a special type of television programs where every word spoken is defined. This makes it easier to understand technical difficult programs for people. If you're having problems with the understanding of uncommon words, you should watch HDTV programs. Words like supercilious and condescending are example of these kinds of words.