From Uncyclopedia, the content-free encyclopedia
(Redirected from Pissed off)
Jump to navigation Jump to search

You may be looking for Piss and not even know it!

“Better pissed off than pissed on.”

~ Oscar Wilde on being pissed

“Today has been a load of shit.”

~ Captain Feces on His day 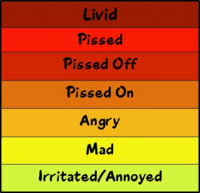 Pissed is one of numerous identified emotions of human beings. The emotion, which was first recognized and recorded in 1883 by sociologist Lester Frank Ward, a man who often struggled with his own bouts of being pissed, is considered to be one of the sole causes of history's greatest struggles such as war, famine, oppression, fascism, anime, and public television.

Ward identified "pissed" as a "really advanced form of angry." Like all breakthrough scientists, he felt it necessary to create a chart which better defined the levels of rage (to the right). This emotion can be dicribed as the compultion to punch kittens instead of huffing them. Unfortunately, all of Ward's attempts to get his works published, such as "What The Fuck Is Anger?" or "I'm So Pissed, But What Does It Mean To Be Pissed?" were in vain. The latter was actually published, but was a commercial failure. In fact, all of Ward's attempted publications had questions for titles. On a side note, Ward was sued for intellectual property theft by Jeopardy!™ ©. He wagered $12,000, and lost.

Stress as observed in the Middle East. WARNING: Looking at this picture would be really evil if we told you who it was supposed to be. If you know, consider atonement by suicide now. 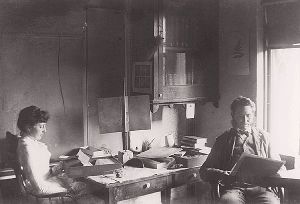 Ward and his wife, seen here, had a bitter marriage.

Being the empiricist that he was, Ward kept a very detailed yet private journal of his experiences throughout his life in an attempt to better understand the human response to social stimuli around him or her. Ward's primary stimuli were his nagging wife (Elizabeth "Lizzie" Caroline) and the rocks and plants he encountered during his career as both a botanist and a geologist. Oddly, Ward talks more about rocks and plants than his own wife. When, on rare occasions, he does mention his wife, it's usually in a negative tone, calling her such words as "ribald", "tail-peddler", and "dant" (these were all very, very bad words back then). He claims her to be an intolerable nagging hag who failed to cook anything that didn't resemble horse feces.

In retrospect, some have speculated that Ward's own animosity and anger is a result of his own troubled home-life. Historical evidence has proven that Liz Caroline was both a real bitch and a real hoe; putting up with her proved impossible, even for an acclaimed genius like Ward.

So where does his theory of "pissed" come from? It's highly believed that Ward based his theory of "pissed" on his own personal experiences. Being one of his later works, "pissed" actually comes from an interjection Ward exclaimed on what he called was "the worst day of my entire life since I was robbed by those midgets." On this day, Ward was reportedly fired from his job, mugged (not by midgets), and lost his car keys. At the end of the day, Ward returned home, only to have his wife questioned what the matter was. Upon hearing her voice, Ward urinated in his pants from anxiety, and replied, "PISSED!"

After the event, Ward adopted the word as his own little inside joke before submitting it to the scientific community.

Ward has also described pissed as "mad enough to kill a man and not feel remorse about it sometime later in life." While this is a broad and often misleading analogy, it hasn't been rejected by the scientific community.

In an 1884 dictionary, pissed is defined as "a form of rage which is absent of concern, regret, or confliction with other emotions; similar to hate, without the plausibility of epiphany." Ward made the following comment on the definition:

Throughout history, there have been many historical events which were influenced or directly caused by being pissed, some good, some bad. Below are a few:

On a spectrum of emotions, love and hate are the two extremes. Pissed is somewhere beyond hate. 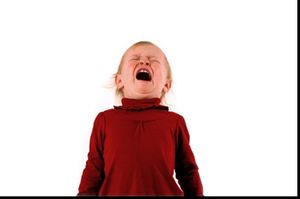 Sometimes angry and tired are synonymous.

This article may be Overly American. Brits may not understand humor, only humour. Canadians and Australians may not understand anything at all. Don't attempt to fix this, or I'll haul yaw ass.
Retrieved from "https://en.uncyclopedia.co/w/index.php?title=Pissed&oldid=5999980"
Categories: