From Uncyclopedia, the content-free encyclopedia
(Redirected from Jeopardy)
Jump to navigation Jump to search 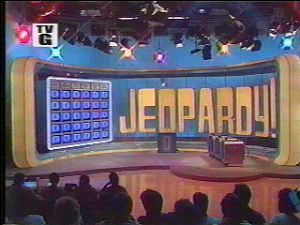 Jeopardy! is an American game show in the format of a quiz show, but with a twist. Instead of simply asking contestants a question and then demanding an answer, the contestants on Jeopardy! are faced with an answer, and then must respond in the form of a question! Get it? Neither did we, but that hasn't prevented the show from being a prime-time hit on American television for the past four decades.

Jeopardy! contestants compete for fame, fortune, and internationally recognized nerd status at the clutches of their emcee master, the late Alex Trebek. Trebek, who died November 8, 2020, was a Canadian who emigrated to the USA, and he never let the audience or contestants forget it. His acerbic wit and condescension were the hallmarks of the show. Up until about ten years ago, so was Trebeck's mustache. However, now as always, the point of the show is to provide as many correct questions as possible and be the highest earner of three contestants by the end of the 1/2 hour run of the show.

For those without comedic tastes, the so-called experts at Wikipedia have an article about Jeopardy!.

The format of the game show is deceptively simple. There are always three contestants. They are faced with a large screen that has six categories, each with a column of five trivia clues (phrased in answer form), each one incrementally valued more than the previous, ostensibly by difficulty. The subjects range from standard topics including history and current events, dirty hot sex, the sciences, the arts, popular culture, literature and languages, to pun-laden titles (many of which refer to the standard subjects), wordplay categories, and even sets of categories with a common. The three contestants compete in three rounds, discussed below: the Jeopardy! Round, the Double Jeopardy! Round and the Final Jeopardy! Round.

The contestant at the leftmost lectern from the viewer's perspective selects the first "answer" from anywhere on the game board, and the selected "answer" is revealed. The host then reads the selection — which, as stated before, is the answer to a question — after which any of the three contestants may ring in using a hand-held signaling device. The first contestant to ring in successfully, following the host's reading of the clue, must then respond in the form of a question. If this makes sense to you, you are a god-damned genius.

One "answer" hidden on the Jeopardy! Round game board is designated a "Daily Double". Only the contestant who selects a Daily Double may provide a question in response to its answer, and make a wager no smaller than $5 on it. If the contestant has a score of less than the highest dollar value in the round, they may wager up to that top value; alternatively, the contestant may choose to "make it a true Daily Double" and wager all of their score. Or, the contestant may wager backwards like the concept of the game suggests, and bet against himself in a process that is too mind-staggering to explain here.

This is possibly the best part of the show. Contestants must wait until the host finishes reading the clue before ringing in. Ringing in before this point locks the contestant out for one fourth of a second. Those who ring in too early are penalized 250 milliseconds (1/4 second) each time they jump the gun. Lights mounted around the game board illuminate to indicate when contestants may ring in, and the contestant has five seconds to offer a response. Additionally, a tone sounds in conjunction with the illuminated lights on episodes that feature visually-impaired contestants.

As stated above, all responses must be phrased in the form of a question. For example, a contestant might select "Superheroes for $200," and the resulting clue might be "He doesn't get it; he knows nothing," to which the contestant would respond "Captain Oblivious." This would be wrong and the contestant would receive a tongue-lashing from Trebek, who would sternly remind the contestant that the correct response is, "Who is Captain Oblivious?" Years of analysis of footage from the game shows that Trebek takes sadistic pleasure in correcting contestants on this point.

During the Jeopardy! Round, contestants are not penalized for forgetting to phrase a response in the form of a question, although Alex Trebek, as the dungeon master, will ruthlessly chastise contestants to watch their phrasing on future clues. During the Double Jeopardy! Round, or on Daily Doubles (regardless of the round), adherence to the phrasing rule is enforced with Trebek's iron fist; those poor souls who fail to use the appropriate phrasing may suffer any number of punishments, from deduction of a random amount of money from their score, to a verbal tirade of abuse from Trebek, to a headbutt on live television by the key grip. 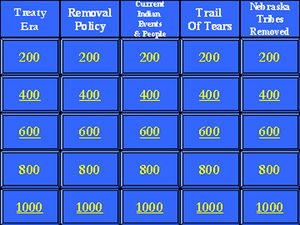 Everything's doubled. Get it?

Never in the annals of history has there been a more smug, self-satisfied, falsely cultured, and condescending game show host than Alex Trebek. For God's sake, he is the Canadian son of Ukrainian immigrants. Not exactly an automatic claim to greatness.

Yet that is what Trebek sees himself as: one of the Greats. He will take any word from any language and pronounce it like a native — his apparent one and only superpower. He has been known to make contestants cry with his cruel words and shifty eyes. He once made a contestant forget her own name and then had her summarily kicked off the show. It has become a ritual for audience members to boo when he comes on stage at the beginning of the show, and the producers briefly considered removing him. They reconsidered, and Trebek remains the soul of Jeopardy! to this day. When asked about his role in Jeopardy by a news reporter in 1998, his response was typical: "Jeopardy? C'est moi!" 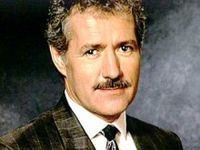 Alex Trebek with his trademark mustache.

For the first 30 years of his show, Trebek sported a bristle-brush mustache like Will Ferrel in Anchorman. This was okay in the 1970s and '80s, the era of the big 'stache (examples include Magnum P.I., Freddie Mercury, and Alex Trebek — yes, he counts himself as a trendsetter). However, by the '90s, the mustache was on the wane as men's fashion everywhere except in Mexico, and by the end of the decade, Trebek had shaved his signature mustache. 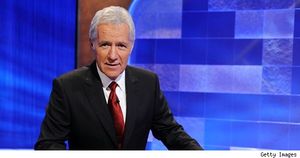 A picture of some game show host... oh wait, that's Alex Trebek. Almost didn't recognize him without the mustache.

Many viewers feared that Trebek without a mustache would be like Vanna White without boobs, but this proved not to be the case. Trebek retained his trademark condescension and false superiority.

This being said, Trebek's recognition levels plummeted after he shaved his mustache. He had been commonly known as that "asshole game show host with the mustache," and the moniker was no longer appropriate. However, as Trebek managed to act like his usual self on the show over the years even without the mustache, his recognition level with members of the public has slowly climbed to approach its previous height.

Every now and then, the producers of Jeopardy! decide they need to spice things up with a special tournament or other gimmick. Over the decades, a few particularly memorable special events have taken place on the show (some repeatedly, others for one time only). Here is a sampling:

The most common and popular of gimmicks on the show, every now and then a panel of three celebrities will be invited to compete on Jeopardy! They are always as dumb as rocks. The producers know this, and thus make the categories and clues become particularly simple-minded. Where a category and "answer" on a typical show might be "Presidents," followed by "He was the 17th President," on celebrity Jeopardy!, a typical pairing would be "Last Names," followed by "This is my last name." Even playing the dumbed-down version of the game, many celebrity contestants often finish their rounds with negative scores. To date, no celebrity contestant has successfully completed the Final Jeopardy! round. Thus, no celebrity has ever played the show and lived to tell about it.

In an effort to be all-inclusive and comply with the new Americans with Disabilities Act, the producers of Jeopardy! aired a special episode in 1992 in which all contestants were mute. Given the fact that they could not speak, the episode consisted of three rounds of Final Jeopardy! (thus turning the name of the round into an oxymoron). The ratings were so low that no episode of mute Jeopardy! was ever again produced.

This was another one-timer. In the late 1990s, the producers felt the show had gained a reputation as being overly staid. To mix it up, one genius had the idea of bringing on three contestants with Tourette's Syndrome for a match. There was only one rule: each contestant had to have been without their medication for a week prior to competing.

The episode was a ratings smash. To this day, people remember the exchange where a contestant said to Trebek, "I'll take my fist up your ass for $500, Alex!" The producers were ecstatic. However, Trebek felt upstaged and threatened to leave the show if another Tourette's episode were ever aired. An official press release from his agent read, in part: "Mr. Trebek is the prime bastard on this show — he's not going to be taking a backseat to any retard, ever, motherfuckers. He can swear and spout off obscenities with the best of them." The producers, afraid of going bankrupt over FCC fines in the event of repeated episodes containing face-offs between Trebek and sufferers of Tourette's, quietly dropped the concept on future shows.

Human Contestants vs. Wall-E the Computer

In 2011, the producers teamed with Apple to create a super-intelligent computer that could compete against actual humans on Jeopardy! The computer, named Wall-E, was a television screen with a red dot eye for a face, and strangely, answered to the name, "Hal." The computer whupped the assess of all of the human contestants, although it had trouble phrasing its responses in the form of a question. Rather than berate the computer, Alex Trebek stood by silently and wet his pants. At the end of the episode, he bowed down before Wall-E and stated, "I welcome our new computer overlords," to which Wall-E responded, "I own you now, bitch." Pundits believe Wall-E has finally broken the proud man's spirit.

Featured Article  (read another featured article)
Featured version: 14 August 2012
This article has been featured on the front page. — You can nominate your favourite articles at Uncyclopedia:VFH.