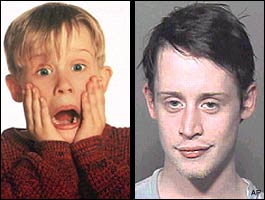 Macauley Culkin before and after developing fame.

Fame is a dangerous disease. People who suffer from fame experience severe symptoms that cripple them from doing the most basic jobs in their lives.

People who are famous cannot eat simply anywhere they might to. They can feed only in costly restaurants and cannot be exposed directly onto sunlight and hence must wear sunglasses constantly, even at night. Most of them develop severe allergic vitriolic reactions to cameras or other image capturing devices, and they become angry or violent when photographed without consent. This makes the use of teleobjectives compulsory in order to be able to take pictures of famous people.

Fame causes its victims to lead shorter lifespans. The most classic example are the Olsen Twins, who grew up from small toddlers to anorexic teenagers to neurotic women in less than a week. The same thing happened to that kid from Home Alone, who went from cute kid to weird teenager to freaky gay man in a couple of years. Less obvious but equally pathetic is the case of Michael J. Fox, who grew up from small kid to small adult, to small old guy with Parkinson's disease in just ten years.

An other complication of fame can be changing of identity and/or character. The most well-known case is Michael Jackson.

Some people have survived fame, and now they lead easy, prosperous lives in small towns. One of the most remarkable cases was Dolph Lundgren, who won a long battle against fame that lasted more than fifteen years. Fortunately, a diet that consisted only in minor roles in bad movies helped him to keep clear of fame (for now). We wish him well.

How to acquire fame[edit | edit source]

It's not clear how to acquire fame, but some signs point to fame being a sexually transmitted disease, since people who marry famous people (or get shagged by famous people) also become famous in the short time. Media exposure doesn't help either: it's believed that cameras can carry the disease with them, so be sure to keep cameras away and burn their nests if found.

One thing to note though is that fame is not detectable in people until they have acquired a Wikipedia page of their own.

Some politicians can also spread the disease, as Dr. Monica Lewinsky proved in 1998. Allegedly, she found traces of fame in Bill Clinton's semen, and sadly she also got the disease.

Andy Warhol once proclaimed his optimism, saying, "In the future everyone will be famous for 15 minutes." However, the promised treatment has not yet arrived; Warhol himself continues to suffer from fame long after his death (although his magazine Interview was cured relatively quickly).

Furthermore, in recent years, cases that appeared to have gone into permanent remission have flared up again, such as 80s synthpop band Berlin and 70s disco act Dschinghis Khan. Researchers are at a loss to describe these sudden relapses, and hopes for a permanent cure are at an all-time low.

Although no definite cure for fame exists, some behaviours can keep you away from becoming famous. People who intensely follow an artist's career expecting to become famous as their favorite artist, never become famous. Fans and fan club never get the disease, even if they meet their idols. Probably constant exposure to famous memorabilia like poster] or t-shirts help to develop resistance. As an example, if you constantly wear a star wars shirt or collect star wars toys, you won't be able to develop fame. Also you won't probably marry, have kids, get laid or get a job.

A number of cases of spontaneously induced fame have appeared on the last years, and have alarmed the scientists. The most notorious cases are Mahir Cagri (the "i kiss you !" guy), the starwars kid, and the fat boy who sang dragosteia. This kind of fame seems to spread over the internet, develops very quickly and almost always leads to Rutherford, New Jersey in a couple of days.

However, this policy has at least prevented all famous people from being vain, as can be seen in the humility of, e.g., Oasis.