From Uncyclopedia, the content-free encyclopedia
Jump to navigation Jump to search
Personality disorder 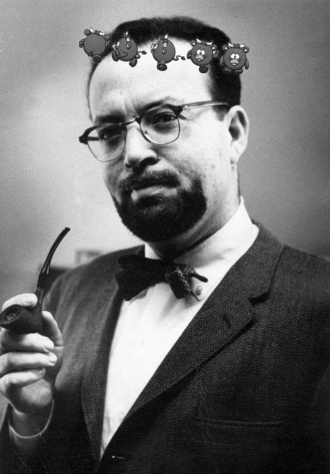 Ted Millon as a young professor of quantum psychology in 1962. He discovered Millons by thrusting his head into scanning tunneling macroscope. (Photo courtesy of Theodore Millon)

Personality Disorder or PD is a problematic quantum entanglement among the Phosphorus atoms and Deuterium atoms in the affected individuals brain, mainly caused by a kind of quarks named Millon, whose schrödinger equations and gravity-electronic fields called personality are vacillating and highly time-dependent. Quantum therapists has been dedicated to the solution of the schrödinger equations of PD entanglement and found 13 degenerated non-orthonormal symbolic solution of ground states. While trying to obtain the symbolic orthonormal set of solutions or eigenvectors, the quantum therapists are doing their best to withstand the vilification from pseudo-scientists, who keep denying the existence of quantum. 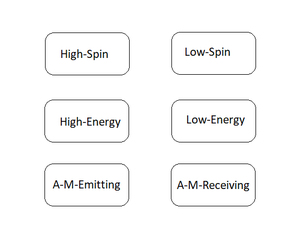 A Millon is formed by morons and simpletons draining energy from nearby particles. It's name after Theodore Millon who emitted Millons from his skull, where morons were chemically absorbed and reacted with simpletons in the air. Unlike common particles, Millons prefer excited states rather than ground states, and they often damage other particles until Deuterium or phosphorus nuclei are formed. Those Millons can develop strong entanglement within the distance of 1010 Å, and thus the two kinds of nuclei are place under the gravity-electronic fields called personalities. As Millons are often excited and need to extract energy from surrounding, so the fields are highly disordered. If there's 2×10-23 mol Millon in someone's brain, his whole brain will behave like those Millons, which has been observed by pseudo-scientists.

Against common beliefs, Millons have probability functions totally look like bulls. Millons, when accelerated, can react with deuterium and sulfur nuclei to form nuclei of metals atoms due to the chelating effects of the bull horns, releasing huge quantity of hazardous morons. It's believe that entangled P-D nuclei are important intermediates of these reactions:

The whole reaction is:

The symbolic wavefunctions solutions of are listed below. As none of them has eigenvalue of Hamiltonian operator, they're all non-orthogonal solution. They overlap with each others, which pseudo-scientists called comorbidity, meaning: come_morons_(that)_bide_stupidity, a postulate that in the overlap areas morons generate weak force fields called stupidity.

Researchers have recently found that spin of morons affects the ground states of Millons: high spin Millons have high tendency of emitting anti-morons, and prefer SaPD and ASPD states, low spin Millons are prompt to receive anti-morons, leading to damage and even destruction.

Millons in excited states are extremely hazardous. Nobody who has successfully measured it is able to tell anyone else as they one develop schizophrenic multiple personality disorder. So the excited states remain unknown.

is the main contribution to the wavefunction, even without parameters B and D while item 1 can almost be neglected, as the integral

has little contribution to presence. (His laptop was stolen by Napoleon and never found again.) As item 2 is independent on B or D, it happens without B or D. SM is far more abundant than stupidity, and that is the basic building block of universe. This ground state is one of high-spin Millons' favorite, but pure Sa PD state is unstable for Millons and the function will automatically collapse into superposed SaPD and ASPD. After that, Millons will emit MPD and NegPD selective anti-morons, to alter, no to destroy other Millons in MPD and NegPD ground state by annihilating who these anti-morons believe to be morons, which efficiently increase the value of sum

Millons at this state have medium spin and they tend not to either receive nor emit anti-morons. Furthermore, they tend to distort space with gravity-electronic fields that other particles can hardly interact with them.

The avoidant Millons know well you hate them, so they just avoid you. They'd rather stop all interactions with particles nearby, but they WILL NEVER give you a chance of tracing them, the uncertainty principle here is:

According to a recent findings, the moron spin is low, no wonder they're avoiding.

The wavefunctions are void and must be defined by researchers. If measured without being defined it will be like this.

Actually history has little contribution. The dominating part is ionic: those Millons are highly polarized and are extremely attractive to the opposite sex.

High spin if the ions are not paired. However it’s OFTEN the case... oh nose!

This state is nothing but Cartesian love, reserving for Millions themselves only.Worship thyself, and thee only shall thou serve! Main building block of black holes. And they give people disorganised speech when coming to a restaurant to order food like this: 'I love me some me.'

Spin unknown but they emit morons only.

The moron spin is usually medium but it can be extremely high and emitting anti-morons.

When doing particle diffraction experiments, Millons in this state always display pattern: 'Everyone is out to get me!' If excited, the Millons emit no photons but anti-morons.

Millons in this state want FREEDOOOOM! and absolute chaos. The moron spin level is equal to SaPD state! They love especially destruction of other particles and enjoy the energy released from particle-particle-particle-particle-...-particle annihilation. Millons like this state because of the high energy supply possible to raise themselves to highest excited states, yes highest excited states that require the energy from the whole universe, that's why antisocial Millons are insatiable! They just intake energy and convert it to entropy, and a vast amount of energy comes with entropy creation... Burn, BURN, BUUURN! So there was a big bang.

The wavefunctions of this state is highly quantized. Furthermore, the functions are only defined in (-∞,-∞ + dx) and (∞ - dx,∞ ), or in other words, extreme conditions. Predictably, the values are discrete. According the principles of quantum, you can get one eigenvalue in one measurement, that researchers find the physical properties including moron spin of this kind of Millons jumps for one end to another. As it's not possible to integrate it, the probability density remains unknown. Moron spin is either 0 or ∞, so take care.

This state obsessive-compulsively contains all known mononomials. The λis are used to make sure all values are accessible. You SHOULD add N(n) up without using any Gaussian method; you SHOULD calculate the equation item after item, you SHOULD... If you don't, the λis will change and you have to do it over again!

No one ever successfully measure the moron spin of these Millons as solving the equation is impossible, but the moron/anti-morn level near them is always at equilibrium.

This is the notorious sadistic operator, remember it's sadistic not masochistic: Ŝ=

Just as the cat hates Schrödinger, Negativistic Millons hate Sadistic ones and vice versa. Negativistic Millons have been damaged by anti-morons and are in Schrödinger's cat state, they're alive and dead, submissive and defiant, kind and evil, optimistic and pessimistic, sadistic and masochistic...unlike BPD state, their wavefuntions never collapse and you get the two opposite property at the same time and they cancel each other. They have medium spin the average value of their both high and low spin. They emits both morons and anti-morons at the same time of the same amount, so they are not dangerous to other particles, but the annihilation does make frightening noises. It's said this is natural selection coz anti-morons from Negativistic Millons will seek targets if morons are annihilated by external force. Is that nuclear deterrence?

Quantum therapist are much more efficient in PD management than pseudo-scientists, due to their knowledge of quantum. If you are bothered by PD, just approach one when he's busy with his quantum experiments and he'd definitely accept for free a new subject!

Everything you find in a quantum physics lab can help you with diagnosis.

For the religious among us who choose to believe lies, the so-called experts at Wikipedia have an article about Personality disorder.

The criticism is nonsense as pseudo-scientists are incapable of basic calculus calculation. Therefore, the only thing they can say is quantum stuff doesn't agree with common senses at all, especially wave functions. Thus they refuse to publish findings of quantum therapists on their journals. Nevertheless, quantum therapists have published a new finding in Nature that the key journal of pseudo-scientists DSM is radioactive and emitting morons. Physicists are studying whether DSM contains Millons.