Warning: This Mel Gibson related article is drunk. It may contain random statements of antisemitism, Anglophobia, anti-protestantism and/or general prejudice towards minorities.

For those without comedic tastes, the so-called experts at Wikipedia have an article about Braveheart.
“There can only be one thousand of us!”

Braveheart was a movie made in 1955, but has since retired due to health reasons. The movie chronicles one of Scotland's greatest heroes, William Wallace -- also known as "Celtic Jesus". The movie grossed $15 million in its first five seconds, most of which is due to people wanting to see Mel Gibson's character die. A total of $100,000 was spent by the Nazi Party for tickets, as Gibson has always been popular among his Aryan homeboys.

It was successful enough to spawn a remake, The Patriot, in which Gibson was able to save thousands of dollars by simply digitally adding in wigs to all the main characters and re-releasing the film. It was an instant success, and only intelligent people realized it was the same god damned movie.

It has been criticized by historians for "completely making things up in a near-continuous stream of bullshit" and shamelessly-exploited by the SNP.

Braveheart was one of the most famous movies starring Mel Gibson (back when he was still taken seriously). It featured (like The Patriot) scenes of extremely dumb cruelty and homosexuality by Englishmen (following the old movie cliché of anglophobia). Amongst them, the most memorable was English king Edward Longshanks (Played by Satan). Although Mel's portrayal of Wallace is commendable, the only reason Mel accepted the role was so that he could (and I quote) "feast my eyes on those ...," well, I'm not going to say it. You probably have a good idea.

This makes the article more aerodynamic, and thus more maneuverable at high speeds. Take caution and carry a first-aid kit at all times if you don't know that Sam dies in "My Brother Sam is Dead", Prince Arthas kills his father and, in the expansion pack, merges with the Lich King, the Magratheans rebuild Earth after the Vogons destroy it, Deckard is a Replicant, too, Ocelot works for the Patriots, the introduction actually takes place after Joel Barish gets Clementine Kruczynski erased from his mind, Captain America bequethed his shield to Stephen Colbert, and Soylent Green is PEOPLE!!!

The movie tells the tale of Edward Longshanks, the English king responsible for adding North England to the United Kingdom and how he had to fight against luck, against destiny, against his "gay nancy boy" son, against his son's "sex slave" and against crazy men with skirts to maintain the incestuous nature of the English empire. The movie tells us how he formulated a brilliant strategy to conquer those lands, consisting of killing all the leaders of his enemies (like what Bush wants to do with Osama) and giving the lands to trustworthy lords, so that the people grew used to living in English lands.

Unfortunately, for some reason, they didn't like the fact that Englishmen were owning their lands and getting fair taxes, and decided to revolt (blatantly shameless reference to the American Revolution). Then the movie focused on the evil Wallace William (or something like that), portrayed by ferocious anti-British, anti-Jew, Leeds United supporting Mel Gibson. He tried to destroy the order and take part in random acts of violence (blatantly shameless reference to George Washington) while King Longshanks (portrayed horribly by Satan) did whatever he could to stop the madman and restore order to the English territory. Unfortunately, William was also a master tactician and fought with an inhuman frenzy, using a rather eccentric strategy involving showing his underwear-lacking "arse" to Englishmen while long phallic-shaped objects flew toward him.

After many battles, his reign of terror was finally thwarted when Longshanks spared no man (except himself) and intelligently turned William's old friends against him. But William managed a cowardly escape while his troops were massacred. This wasn't over yet. He came back and killed his old friends, one by one; soldiers of Longshanks could do nothing to stop his bloodlust, but a caring, diseased old person managed to inform the authorities and William was arrested before he could cause any more harm. 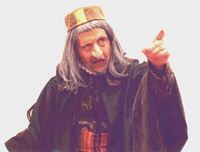 King Edward Longshanks, as he appears in Braveheart. Historians have queried Gibson's portrayal of the king as Jewish.

Longshanks, of course, tried to be merciful, but William kept testing his patience. Longshanks decided to have him killed, but gave him one last chance by asking him to "Please, stop this. And bow before me. Here I'll help you." William didn't refuse, he just screamed "FREEEEEEEEEDOOOOOOOOOM!!!". That surely wasn't an answer. Longshanks pitied him, for he was clearly mad, and put him out of his misery. Then the movie shows the fall of Longshanks's empire, when Bruce, one of William's brainwashed kids, led another band of mad dogs to kill many other filthy pommies. 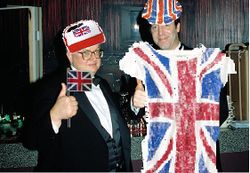 Ebert and Siskel going into the theatre thinking they're going to see another movie of brave and pompous british forces kicking someone's ass. 5 minutes into the movie, Siskel dies of a stroke and Ebert is sent to the emergency room.

The movie suffered many accusations of anti-Britishness. For example, people claim that the scenes where English people appeared, they were purposely portrayed as cruel for no reason at all(except that maybe it was a historical fact). Director George Washington XX claims that "The Limeys in the movie are a allegory, referring to the forces of Judaism. In his fight against the evil Brits, Wallace is an allegory to the fight we all must endure against the evil Jew within ourselves.". A Scottish man claims that George Washington XX is a dumb ass and that William didn't fight the British because he was a British, since he lived in the island of Great Britain, but he agrees that "The movie ish overly American.".

Roger Ebert wrote one of his most eloquent and brilliant articles about the movie:

The sound track for this move was, "Take me in your arse" and "You are my Braveheart" by the Children of Bodom. Also included were Mel Gibson's Scottish Nazi Favorties. They also threw in the Lethal Weapon soundtrack at Gibson's request.

This article is part of UnFilm The preferred oeuvre of Drive-Ins everywhere.
Retrieved from "http://en.uncyclopedia.co/w/index.php?title=Braveheart&oldid=6073401"
Categories: