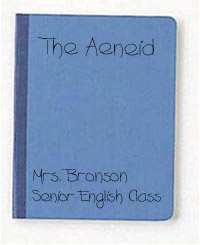 For: Mrs. Bronson's Senior English Class (4th Period) (Please Give me an A)

Introduction: In Which I Introduce the story the Aeneid, which I read.

The Aeneid is a play by a famous Roman writer who wrote many famous plays, and also wrote stories which are read often until this day, by students such as myself hopeful for As on reports that they may happen to write for their great teacher's. Anyway, The Aeneid is a tale of wisdom, but also of woe. And in it many things happen that are likely to happen to the average Greek, namely, eating, death, and dragon fighting. A lot could be said about the Aeneid, about how important it is, about how well-written it is, and about how longing and forboding a text it could be, but I will not say these things, as they are things a person who did not read the Aeneid would say, and as I obviously have read the Aeneid, I won't have any trouble with this report. Please give me an A. Thank you.

And continuing on, the Aeneid says many things about what is to be a human being, but it also says many things about what it is to be a greek. How can these two ideas intersect? It's hard to say, but luckily for us, the Aeneid tells us! It says (paraphrasing) that Men do good things, but also don't, and greeks are very much like this. Thank you Aeneid.

Listen to this one source talk about the Aeneid:

The Main Characters: They're pretty great.

Before his work as one of the Thunderbirds, Virgil wrote stories, including this one. He also looked a little like Marlon Brando, but before he went all fat and crazy.

So the main character, Aeneid or 'A' as he is called often for shortness, is a powerful greek warrior who only talks in very boring poems. He has a pet bear and a powerful spear which he uses to shaft other greeks because they are very naughty and deserve a shafting from a man such as Aeneid. Also the Ancient Greeks were homosexual, which is common in the animal kingdom but is totally disgusting when that kid that sits behind me gets all gay, so could you please move him? Thank you.

There are also many other characters, but they are unimportant and they often don't have powerful spear shafts like A.

What else is in this great book?

Many things. Words, but that goes without saying. No pictures, because this is a very serious book about serious matters pertaining to serious things, like archery, which the Ancient Greeks were very fond of. Story

The Aeneid can be divided into two halves based on the disparate subject matter of Books 1-6 (Aeneas' journey to Italy) and Books 7-12 (the war in Italy). These two halves are commonly regarded as reflecting Virgil's ambition to rival Homer by treating both the wandering theme of the Odyssey and the Iliad's themes of warfare.[1] This is, however, a rough correspondence whose limitations should be borne in mind.[2]

Virgil begins his poem with a statement of his theme (Arma virumque cano…, "I sing of arms and the man...") and an invocation to his Muse (Musa, mihi causas memora…, "O Muse, recall to me the reasons…"). He then explains the cause of the principal conflict of the plot; in this case, the resentment held by Juno against the Trojan people. This is in keeping with the style of the Homeric epics, except in that Virgil states the theme and then invokes his Muse, whereas Homer invokes the Muse and then states the theme.

Also in the manner of Homer, the story proper begins in medias res, with the Trojan fleet in the eastern Mediterranean, heading in the direction of Italy. The fleet, led by Aeneas, is on a voyage to find a second home. It has been foretold that in Italy, he will give rise to a race both noble and courageous, a race which will become known to all nations. Juno, wrathful because on one hand, she had not been chosen in the judgement of Paris against Aeneas's mother, Venus, on the other, her favorite city (Carthage) will be destroyed by Aeneas' descendants, goes to Aeolus, King of the Winds. She asks that he release the winds and so stir up a storm in return for a bribe. He agrees, and the storm devastates the fleet. Neptune takes notice: although he himself is no friend of the Trojans, he is infuriated by Juno's intrusion into his domain, and stills the winds and calms the waters. The fleet takes shelter on the coast of Africa. There, Aeneas's mother, Venus, in the form of a hunting woman very similar to the goddess Diana, encourages him and tells him the history of the city. Eventually, Aeneas ventures in, and in the temple of Juno, seeks and gains the favor of Dido, queen of Carthage, the city which has only recently been founded by refugees from Tyre and which will later become Rome's greatest enemy.}} (About.com)

So in summary, Homer is very much like the Trojan fleet and the Illiad, which is also a great book. That's two sources, count them.

Other Characters: Too many to count

The Aeneid has so many important characters it would be impossible to list them all, so I won't try. Instead I will tell a general outline of them:

They're usually very tall warriors with spears who talk a lot about heavens and seas. Also they fight. Believe it or not, though, they have a heart and often write boring poems to demonstrate this. I think we can all relate to them when we remember that one scene where they discuss love. It was very emotional, I thought.

It's often hard to figure out just what the people in the Aeneid are even talking about sometimes, but we certainly all agree that it's very important, and also enjoyable to read in study hall and English class, like I did when writing this report.

The Plot: It's very long

There's too much plot to even begin to go into here, so I won't. That being said, the plot was very good.

The Conclusion: In Which I show that I didn't just make the essay up. I didn't.

In Conclusion, the Aeneid is really about humanity, but it's about so much more in terms of important things, like love, and hate, and war, and all those other things that make us who we are. Really the Aeneid is the only book you should ever need unless you want pictures or fun, which serious scholars do not. In all, the Aeneid is probably the best book I've ever read. Even better than the Call of the Wild.

Many many Biblical references are copied in the Aeneid. Causing scholars to believe that he had a copy of the Bible open whilst writing his magnum opus. Especially references to a local flood and a square Earth. Professor Ardvark Hammering has stated that the name Aeneid is just a really screwed up Greek translation of "Hoi Bibilos". Although he can’t prove it, he believes that it is a Governmental cover up of the highest magnitude. President Obama will not comment.

I cited them in the paper using MLA, PSA, or English citations. Please look.