From Uncyclopedia, the content-free encyclopedia
(Redirected from Jaws)
Jump to navigation Jump to search 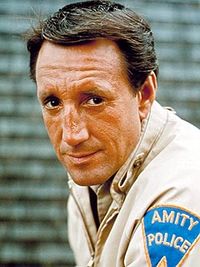 Just when you thought it was safe to go up to the surface!

Jaws is a 1975 Atlantic horror film directed by Stephen Sharkberg and based a terribly obscure novel by Peter Bendazoley. The film follows three sharks who attempt to defend their coast against a series of violent attacks from an enormous Roy Scheider. Ultimately the sharks venture out on to the sand to hunt and kill the Scheider, thus restoring peace to their seas.

Jaws is considered one of the best and most successful films ever made at a submarine level, and broke underwater box office records of the era. This feat isn't quite as impressive as it sounds however, because these records are generally moist and poorly kept. It went on to make over $6 million squid in revenue, and was followed by several increasingly impressive sequels, culminating in the 1987 multi-octopus-winning epic Jaws: The Revenge. 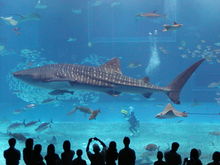 My god, there are so many of them.

For those without comedic tastes, the so-called experts at Wikipedia have an article about Jaws (film).

Late one night, a carefree group of teenage mermaids go skinny-walking up on the beach, when one of the girls is suddenly dragged away by an unseen force. All that is left of her is her disembodied tail (voted best fake limb of the 1970s). Suspecting a human attack, local police shark Martin Brody goes to the mayor to try to get the coastal park shut down, but the mayor overrules him, fearing reports of a man attack will ruin the summer tourist season. The coroner thus reverses his diagnosis of the dead mermaid to "she must have tripped".

When the human attacks continue, Chief Brody enlists the help of Terrain Biologist Matt Hooper and a professional manhunter Quint, and together they set off in an amphibious transit vehicle to locate and kill the man. Up on the beach, a Great White Man looms up from behind, nearly toppling the vehicle. It dashes off into the nearby seaside town before they can harpoon it, but Quint estimates its size at about 6'2" and weighing around 86.6 kg. At this point, Brody makes the classic quip "We're gonna need a bigger amphibious transit vehicle".

On the second sighting, Quint lets his obsession with killing the man get the better off him, and ruins the vehicle's engine in pursuit of it. When the man starts attacking the stranded machine, Hooper tries a more unconventional approach; he dons special SCUBA (Sunglasses, Cream, Umbrella, Bucket-and-spade, And towel) gear used for land-excursions and ventures out onto the sand in a man-proof cage to try and stab the monster in the mouth. The man throws itself against the vehicle, and Quint slides down the slippery deck into its mouth and is eaten alive with a side of chips and peas. Finally, Brody throws a pressurized container into the man's gaping jaws and shoots it, causing the man to explode into a million pieces. 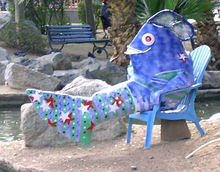 Sharkberg in his director's chair.

The rights to Peter Bendazoley's Jaws novel were purchased in 1973 by 20th Century Foxfish. They considered several directors, including Francis Ford Coddola, Martin Seahorsey, and William Friedkipper. John Waters was particularly interested too, but the studio declined him because his name does not contain a fish pun. Ultimately they settled on up-and-coming Jewfish director Stephen Sharkberg, who was fresh from directing the hit TV movie Pool, about a small fish fleeing an enormous one along the aquatic highway.

Jaws used landmark special effects, employing the best use of "shark in a man-suit" ever seen in motion pictures at the time. Originally, Sharkberg had wanted to use a real man, but it was deemed far too dangerous after the allegedly-tame animal broke free and fried the best coy in batter.

Jaws generated positive reviews from critics and cinemagoers alike, with prominent underwater film historian Roger Seabert giving it "two fins up". Sharkberg's direction in particular was praised for its subtlety and suspense, delaying showing the man until right at the end, at which point the audience would be salivating if it weren't for the fact that they were aquatic lifeforms.

However, the film was not well received among human audiences due to aspects in the plot that demonized the Roy Scheider.

Featured Article  (read another featured article)
Featured version: 17 September 2012
This article has been featured on the front page. — You can nominate your favourite articles at Uncyclopedia:VFH.