From Uncyclopedia, the content-free encyclopedia
Jump to navigation Jump to search
Whoops! Maybe you were looking for Call of Duty, or Pink? 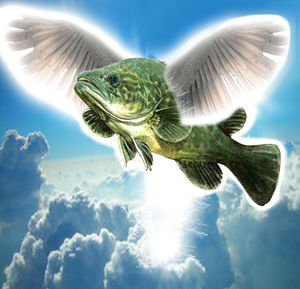 God Cod, in all His glory.

For those without comedic tastes, the so-called experts at Wikipedia have an article about Cod.
“The infidels will regret their denial of the Great One when they are spiraling down the Maelstrom of Eternal Suffering, screaming for mercy but getting none, because they are all filthy landlubbers! Cod, how I hate landlubbers.”

“Don't try to make Cod in your image!”

~ Some religious guy, or possibly a chef on making Cod in your image

Cod (often mistaken for God) is a fish-deity of a sect known as the Spunky Sailor Gnomes. He is also referred to as The Great Finned One, the Sky Fish, and Our Flounder Who Art In Heaven[1].

Followers of the Cod's Path believe that before the universe was created, everything was one infinite ocean, known as the Eternal Sea of the Deep. The only being residing there was the Almighty Cod, who blew bubbles and created the world as we know it. However after creating a few planets, stars and other celestial objects, he soon got bored with the idea, and instead created a bunch of jolly sailor gnomes to finish his work. These magical beings are referred to in holy scripture as the Spunky Sailor Gnomes, and all followers of Cod belong to a sacred "Spunky Sailor Gnome Brotherhood", even if they may not be a gnome themselves.

Upon initiation as a Spunky Sailor Gnome, one must pass a secret rite known to no man outside of the inner circle of Cod worshippers. However, it is suspected that it somehow involves whales and a lot of lube. Once this rite is passed, one is given a special name related to a sea creature in some way. Examples include Shrimpman, Stingrayman and Octopusman. The arch gnome is known as the Codman, a name which is passed from father to son throughout generations. Once the Arch gnome's son (daughters are left to be ripped apart by lobsters, as they are considered "landlubbers") comes of age, the father commits ritual harakiri by shooting himself in the stomach with a cannon, and the son receives his title as Codman.

The followers of the Cod live their lives by the ten Cod-mandments:

It is said that after the Cod created the first Spunky Sailor Gnomes, he went to sleep, and would slumber for millenias to come. Recently, there has been much stirring in the Gnome Environment, as the current Codman, a jovial fellow who until his coming of age went by the name of Barry, has claimed that the Cod is awakening, possibly because of global warming. According to his prophecy, the Cod will awake on the seventh day of the seventh month, of the year 2017, to judge living and dead alike, damning all non-believers (or "landlubbers") to a watery grave, forever drowning without the escape of death. Informed sources claim it is somewhat like a Nelly Furtado concert.

The Spunky Sailor Gnomes has received a lot of criticism in the media throughout the sect's existence, both because of their somewhat pushy ways of spreading their religion, and for killing fishermen with harpoons. When asked about these incidences, the Codman answered that his brotherhood was "only doing to them what they are doing to the Cod's children". Also, Ex-gnomes have criticized the environment for brainwashing, and for completely shutting them out once they leave. Lastly, theologists claim the entire religion to be "a bunch of genuine bullshit", something which is agreed on by most/all scientific environments.