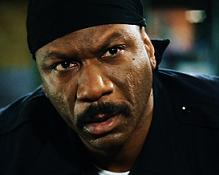 MILWAUKEE, Wisconsin -- The dog of actor Ving Rhames, found its way into the local Crossroads Mall and killed a zombie that was about to attack Rhames within an inch of his life, the Associated Press reported Friday.

The 40-year-old victim, who has not been identified, had died from a heart attack fifteen minutes before rising from the dead sometime after 1 P.M. Friday. Officer Ken Foree saw the whole thing in shocking detail, and had this to say:

“It was horrible! He had the greenest, sharpest teeth I've ever seen in my entire life! His body was uglier than my wife's! I saw this zombie's face, I thought it was a mask, and I said to him: I oughtta rip that mask right off of your face! He ripped it off to reveal that he was actually Sumner Redstone, president of Viacom, but he still looked the same with or without the mask. Damn, I hate zombies!” 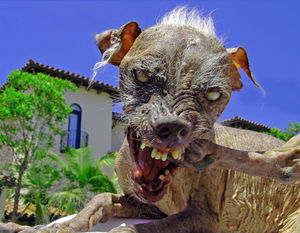 Fluffy Rhames as a zombie.

It was revealed by CNN's Larry King that the dog, 3-year-old Fluffy Rhames, had been bitten by the zombie before killing the undead man. Apparently, Rhames had been shooting at the guy for five minutes before Fluffy killed him at 4:30 Friday afternoon. The dog then turned into a zombie himself and began attacking Ving Rhames until Rhames gave her her allergy medicine, and everything was back to normal.

"Don't worry 'bout 'er," Rhames said Saturday, "She always like that when she ain't gettin' 'er meds, ya know, dawg." 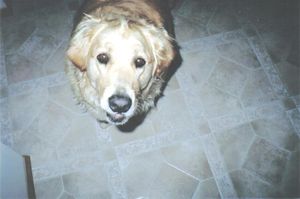 Ving Rhames is perhaps best known for playing the black guy in the 2004 remake of George A. Romero's 1978 cult classic, Dawn of the Dead, which has led to a whole slew of zombie-related articles on Uncyclopedia, Wikipedia, Weekly World News, and the Wall Street Journal. It has been the subject of many YouTube videos, Broadway musicals, operas, school plays, songs, Pat Robertson rants, Mr. Rogers episodes, and of course, a very controversial episode of I Love Lucy which was deemed far too violent and profane to air. It has since aired on Spike TV and the Sci-Fi Channel with a TV-MA rating.

Ken Foree retired from acting in 1978 and became a zombie hunter until the undead was officially dead for good. Then he became a police officer, where he continues to deal with supernatural creatures. "Zombies, vampires, Frankenstein, ghosts, Ghostbusters, Christopher Lee, anime, Kevin Federline's musical career, all kinds of scary stuff," he says.

As of this writing, all of the zombies are dead for good, and are not coming back... Oh, no! Bob, you look all green. Oh noooooo! AAAAAAAAA!