From Uncyclopedia, the content-free encyclopedia
Jump to navigation Jump to search
“King Diamond? Best band ever.”

~ Jay from Clerks on King Diamond 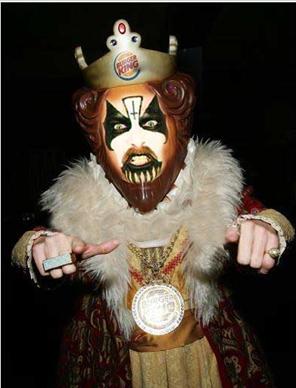 One of King's early job prospects. Unfortunately he was fired for placing gypsy curses on 17 children and making Christian heads explode.

King Diamond (Latin: Epicus-Metalus) is a Grammy Award nominated Danish time-traveller, member of a famous metal band, an avid spelunker, wears his trousers too tight, stole Gene Simmons face, solo artist, monarch, practitioner of black magic, member of the Scooby Gang and jeweler. But he is a king, and he is rich enough to afford even the most valuable diamonds. He is also a master alchemist, and is able to tranform any material he wants into the blackest of metals.

King was born in a cemetery, under the sign of the moon. Raised from his grave by the dead, he was made a mercenary in the legions of Hell, now he's King of Pain, he's INSAAAAAAAAAAaaaaaane!!!!!!!!

Diamond enjoyed a childhood of privilege as a member of Copenhagen's most respected family of jewelers. Upon hearing Deep Purple in his teens, Diamond determined that a life of procuring, cutting and polishing precious gems didn't appeal to him as much as one of playing rock 'n' roll. A rare skin condition rendered the skin on King's face especially sensitive to sunlight. As a result, King had to apply full-face makeup whenever he went out in public.

After moderate success with the band Black Rose, King met up with members of the punk band Bratz to eventually form the legendary metal band Mercyful Fate. However after only two albums, all the awesomeness in the universe had been used up and so the band decided to hang it up. Some say that they reformed somewhere in the shadows of time and recorded some more albums, but this is thought to be only a rumor. 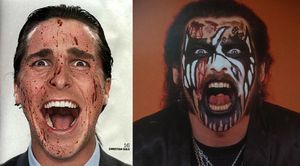 King once competed in a crazy-face contest with Christian Bale, which ended in a draw

King had a traumatic childhood. His father tried to kill him with an axe, but he stole the soul of Alice Cooper and was able to live on. His grandmother killed his sister on advice from a gang of ghosts, then he beat her skull in with her own cane. His mother went crazy and confined him to a mental institution called Black Hill Sanitarium, planning to have him cremated. So he escaped from Black Hill Sanitarium and fled to France, taking shelter in a convent, hoping to find some sex-starved nuns. However he forgot about the fact that nuns have no fun.

The leader of the House of God, Father Picard, was so insane, he drugged King and some nuns to help him carry out ritual satanic sacrifices. In 1642 it came to an end, with Picard being arrested for impersonating a starship officer. King and one of the nuns, Sister Miriam, escaped and eloped to an apparently abandoned mansion in darkness. Little did they know that the mansion was really the home of Count De La Fairy, the most fabulous vampire in all of France. Upon the return of the vampire, an epic battle of the sexual orientations ensued, with King's expertise in poser extermination giving him the upper hand. After slaying the Count, King and Miriam were free to live out their lives in peace. Or so they thought...

King and Miriam were attacked by the ghost of his unborn great aunt Abigail Williams, who died when her mother was pushed down the stairs by the original Count in a completely justified act of violence against deathcore. The ghost possessed his wife and pushed him down the stairs, crippling him. Miriam gave birth to the reincarnated unborn girl who then ate her alive from inside. The girl grew up, had sex with King, fed him broken glass and then burned him alive. But the sex was pretty good.

He survived by putting his soul into an enchanted necklace, The Eye of the Tiger. The necklace allowed him to jump back and forth through time, though he knew there's a bad side to the power of the chain, and he'd be going back in time once again. He went back to the 1600s and married a beautiful woman named Melissa, the Queen of the Night. She was later accused of being a witch by Pat Robertson, and burned at the stake. Swearing revenge against the priest, he forced him to look deep into The Eye, killing him with the horror contained within and banishing him forever to the Christian Broadcasting Network.

King went back to his old house, but left at once, when the house was full of spiders. So, King packed his bags, crosses and Formula-games, and went to near Missisippi. King moved to live in the sacred ground of Voodoo priests, who did`nt like King`s stupidly high voice... When King went to eat food at Chinese, the Voodoo priests poisoned his food with Goofy dust, and King started sweating like a pig. King thought, that it was because King had done no sex for weeks, so he decided to leave.

King fled to Hungary where he scored on the rebound with a young woman he met outside of a puppet show. The Master Of Puppets then captured them, cut them up, and turned them both into living puppets. Soon they were forced into the Hungarian puppet sex trade. They were rescued by a gypsy woman, who was not his mother, she was a part of his soul. She undid the curse and put it on Barack Obama, forever making him a puppet. King still feels the effects of being a puppet years later.

Eventually he went to live on Never Ending Hill with his black cat Magic and his beautiful Hungarian wife of half his age. Looking back on the sheer awesomeness of his life, and his innumerable sexual conquests, he decided to write metal songs about his adventures. The movie adaptation is coming out next year, and is sure to make your head asplode. 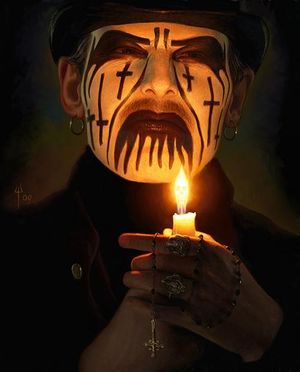 "I knew I should have payed that electric bill..."

On his own King Diamond released many hit CDs that allowed him to gain a great influence and travel the world. His followers were known as the "Diamond Bangers". This badass following spread Diamond's music by playing it really loud in their vehicles, house, public events, hell, heaven, and anywhere else you can think of. Soon, the divinity of the "Diamond Bangers", or "Diamond Blasters" as some called them, was growing.

King Diamond also met up with Oscar Wilde and recorded a duo record in the Thomas Edison Radical Recording Studio. Unfortunately, he no longer had The Eye, and when King Diamond travelled back through time in his Temporal Coffin, the master recordings were wiped due to a field interface stabilizer that failed to shield electromatic recordings. Also, the macro-mac field integrator burned out and the thermo modulator on the temporal dampers would have to be replaced, severely limiting time travel to just 2 months.

But the rest as they say, is Menopause. 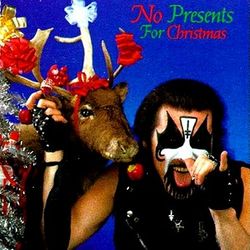 For those without comedic tastes, the so-called experts at Wikipedia have an article about King Diamond. 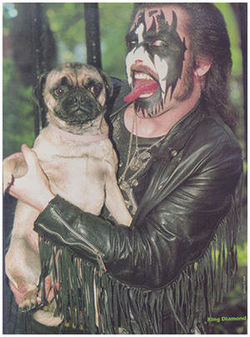 King once tried huffing a pug. The dog would later develop a severe abandonment complex.

A commercial for King's very own brand of aftershave: