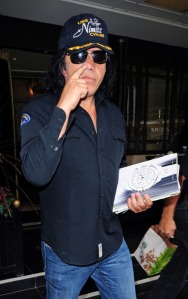 Gene Simmons picking a winner of the next KISS replacement guitarist contest.
“All my demons have to pay Gene now because he bought their name for his onstage character. And with 'KISS Land' down here, I somehow owe HIM money from it.”

Gene Simmons (born August 25, 1949) is an Israeli–American musician who is the frontman, bassist, lead singer, and a founding member of faux-rock band/faux-Satanic marketing gimmick KISS, as well as the self-proclaimed inventor of everything, the first person to use the "Devil's horns" gesture, a jack-off of all trades, and a master of your mom. Groupie folklore holds that his overly-long tongue is the cure for cancer, and he has somehow scored with numerous women despite having a gravely body and a gravely personality to go along with it.

Simmons was born to poor cowhands in the small fishmonger town of Haifa, Israel, under the unusual name of Chaim Witz (proununced Kee-yum Jones). Him and his parents left their peace-loving state by the late '50s, relocating to the United States — New York City, to be exact. Chaim's father was a minister in New York, but was recruited by the CIA for a mission in Lithuania to confiscate the remaining stockpile of "little people", which were being used as local entertainment for knife-throwers and prostitutes. He never returned, but Chaim wasn't sad. It wasn't long before young Chaim took on the name Gene Klein (pronounced Jean Clean) upon finding out his mother was not named Witz, and then updated it to "Gene Simmons".

Growing up, it soon became apparent that Gene was "different", as he was a mutant who had telepathy, telekinesis, pyrokinesis, and hemoptysis. His childhood was especially traumatic as he was often susceptible to bouts of vomiting up blood and fire. Doctors recommended that Gene be confined to his room, where he discovered comic books and rock & roll soon after, and spent his days learning to play bass guitar with his overlong tongue. 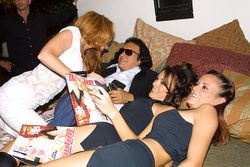 Gene Simmons performing on my couch.
“I AM poetry in motion.”

Gene was originally groomed to be a rabbi at one point, but instead he decided to become a school teacher and teach English in Spanish Harlem. He would save all of his money to buy comic books to bribe his female students with, so they wouldn't tell on him for utilizing "Good Touch, Bad Touch". After a brief stint in the X-Men, where he made good use of his mutant powers, he then decided to pursue a career in music. Soon young Gene joined the band Beerfrog Bull and it was at their third show that he first set himself on fire, not from pyrotechnics, but from trying to light a green-haired groupie's cigarette with a flamethrower. At another show, Simmons created a small nuclear fusion reactor for special effects; alas it exploded, and his crazy hair has stayed the same since. Eventually Beerfrog Bull disbanded and Simmons moved on to another band, the cleverly-named Long Island Sounds.

For those without comedic tastes, the so-called experts at Wikipedia have an article about Gene Simmons.

In 1973, Gene was washing his shoes at a laundromat when he was approached by a young man named Paul Stanley, who was looking for money to buy another batch of Matzo for his mother. They hit it off, after snorting mad quantities of "Brooklyn Dust", which wasn't really a drug, but an early form of Ritalin. They went to Studio 54 to find their fame as Solid Gold Dancers, but instead ran into a bum named Ace who had a friend/pet alley cat named Peter. The four then decided to form the band KISS (also known as "Kittens in Slick Suits", or "Kikes in Spandex Sells" as white nationalist groups nicknamed them), and they've regretted it ever since.

But they needed to learn how to play first. So after selling their bodies to various men at Studio 54, they gave up on learning how to play and decided to "wing that mother." Gene created the band's logo, the makeup designs, the crowds, the ticket stubs, the tarmac, and the lights used to light the stage, and they made beautiful music sound shows together. Their stage shows typically consisted of young demons lying on top of older demons in saucy outfits while performing their trademark actions such as blood-spitting, fire-breathing, and tongue-wagging. At one point, Simmons endorsed the glam metal band Warrant as a whimsical attempt to create competition, but it failed. Simmons is now 68 years young and continues to tour with his band; he can still sing, though a forklift is required to bring him up on stage. Due to his ego, he will not admit his defeat in a bass battle with Les Claypool.

Gene's music career has only been surpassed by his film/television career and to date he has made and/or starred in dozens of the worst movies and TV shows ever to grace both the big and small screens, such as KISS Meets the Phantom of the Park, Never Too Young to Die, My Dad the Rock Star, and Gene Simmons Family Jewels. There's nothing funny in this statement except that it is 100% correct. Never Too Young to Die was an utter disgrace, unless you're into seeing Gene playing a hermaphrodite villain with female breasts who battles James Bond. Not him fondling female breasts; he actually has female breasts. 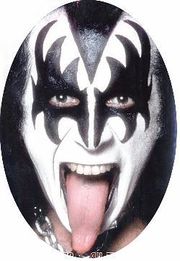 Rumor has it that Gene Simmons had a cow's tongue grafted onto his own.
“I am the Walrus.”

~ Gene Simmons on The Beatles

Simmons is the most recognizable figure in KISS, and has also been called "stuck-up" on several occasions. "I hate the guy," says Eddie Van Halen. "He always got up on his damn high horse and said he was THE bass player. He can breathe fire! Whoopty fuckin' doo!" Gene eventually became fed up of all the accusations of being "stuck-up" and issued this public statement: "Can you assholes breathe fire? Can you spit blood? No. I am God. I can rip off your collective heads and shit down your collective necks and you would fall on the ground, worship me, and suck my toes. So eat it." Gene had holy water sprinkled on him shortly after.

In 2008, an Internet video surfaced allegedly showing Simmons engaging in sexual activity with an unnamed woman who was not his wife. To cover it up he quickly created another controversy, where in his memoirs he claimed to have invented the Corna, the "Satan's horns" salute to rock. But everyone knows Ronnie James Dio came up with this gesture, and Gene is just a silly goose. Gene, we don't care if you bone other women; you dress up in spandex and makeup, squeeze every last drop of cash out of your legacy, care only about yourself, tell depressed people to kill themselves, and think women can't have both a job and kids for God's sake. It's not like society hasn't already judged you, and besides, it's not like you've ever been faithful to one particular woman.

Simmons later posted a response to the Uncyclopediac above, saying, "I'm just happy to have something else out there with my name and picture on it. KISS this." 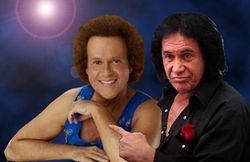 A very rare family photo of the Simmons half-brothers, taken at Glamour Shots in 2007.

Simmons has allegedly slept with 4,600 4,800 women in spite of having a schmucky face, and he claims to have over 340 lovechildren. Only a few hundred of his alleged lovers have stepped forward; Monday on his daily television show, Gene Simmons Family Jewels, he will be strapped to an electric chair and threatened with death if he doesn't tell the truth. When he is not dodging marriage proposals from his illegitimate groupie partners of 40 years, or denying reports that he is the half-brother of uber-fruity diet guru Richard Simmons, Gene spends his time with his legitimate family. His wife Crystal looks like a melted Barbie with all the Botox and plastic surgery, his son Wily is a manga artist who infamously plagiarized Bleach, and his daughter Serenity is the only female on the planet who Gene Simmons has never claimed to have had sex with.

To date, Simmons is still alive, but his hair passed away in 1987. Recently he underwent plastic surgery to make himself feel prettier, but after the surgery, everyone was reassured that he would always be one gravely-looking snake-tongued motherfucker. Throughout Gene's career, rumors have persisted that his sharp-tongue was actually a surgically-soldered banana peel, which he vehemently denies.