Bela Lugosi is Dead. This is what he looked like when he was not, he was merely undead at this point.

Bela Lugosi was a man who made a living spitting on children, eating raw oompa loompas, vonting to suck your bluud! being rubbish at communism, acting as a monster and pretending to be dead. Now he is dead. No amount of fame can change that.

For those without comedic tastes, the so-called experts at Wikipedia think they have an article about Bela Lugosi.

Born Count Bela Ringa in a castle somewhere in a misty part of the Carpathians in 1415. By the age of sixteen, Bela had invaded Asia Minor where he developed his addiction to heroin, cursing God for his ill fortune. He later developed vampirism and found he had to suck blood as well. He didn't have a good time in Asia Minor.

He sadly lost power during the Reformation and was burned a number of times. By the 19th century, though, killing vampires was out of fashion and so he was able to feast regularly on blood. There was only so much in the local area and so he decided to travel to Whitby on a ship. His wives threatened to have him prosecuted for bigamy, though, so he gave up and went back to his castle. 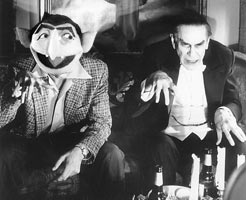 Ed Wood (on the right) and Bela Lugosi

In the early 20th century, he found that going to Hollywood was a good way to get lots of money, blood and heroin and no one really cared. After several incidents, which lead to a fearsome argument with the chief executive of Universal Pictures, it was determined that Lugosi wasn't allowed to obtain or drink real blood during filming so he stuck to heroin and cognac instead.

Finally, in 1940, he was famously staked to death by Edward Van Sloan. This didn't keep him down, his wives returned and brought him back to life by a blood sacrifice. After meeting Abbott and Costello, he decided to go into retirement for a few years before coming back as a zombie for Plan 9 from Outer Space, finally got his own coffin and was allowed to retire with his cape which previously he had been unable to afford.

Bored with undeath and wanting one last thrill, in 1999 he persuaded Buffy Summers to straddle him and stake him through the heart, thus being the only actual vampire she ever killed, the others all being merely deluded. But will he come back? In the past, as with Boris Karloff, he always came back.

He still vonts to suck your blud.