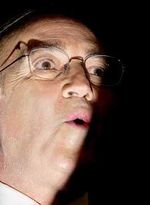 “There's something of the shite about him”

Michael Howard (originally Count Mikhailos Brian Howardii) is a British Conservative member of parliament. He served as Home Secretary under John Major and is a former leader of the Conservative Party. He is known for his authoritarian policies on law and order and... well... let's just say he likes to stay up late. In fact you rarely see him around before sunset.

Little is known about his formative years. Some say he had a normal upbringing that we simply don't know about and which he simply will not divulge for his own reasons. Some, however, say he arrived on these shore early one stormy morning in the autumn of 1878 from a dark corner of Eastern Europe. Although his passage was by boat, he did not travel amongst the other passengers and was said to have made his own arrangements in the ship's hold.

Howard remained relatively obscure until he was asked by John Major to join his cabinet as Home Secretary in the 1990s. Howard soon showed a great deal of enthusiasm for this role[1] and increased prison populations by fifty percent during his reign. In 1994 he was instrumental in introducing the Criminal Justice Act into British law which was designed to close-down illegal raves in Tory constituencies the British countryside. Howard said "I used to love the children of the night and the sweet sounds they made but these young people who I am told call themselves "the ravers" have ruined all that and it's time to take action." Asked if the Conservatives planned to pass similar bills to curb more serious crime in inner-city areas Howard laughed his sinister laugh and responded "Don't be silly, those are Labour strongholds" before enjoying a glass of deep-red wine.

During this time he made an infamous appearance on the BBC's Newsnight where he was grilled by Jeremy Paxman who repeatedly asked him whether he had threatened to overrule the chief of prisons, a question Paxman asked several times. Howard eventually answered the question years later, saying he had not threatened to overrule the head of the prison service's authority. When Paxman asked Howard if he would "stake" his reputation on this being an honest answer Howard visibly shuddered. Since this interview, Paxman has taken to wearing cloves of garlic around his neck for some curious reason.

Leader of the Conservative Party[edit] 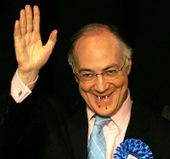 Keen for some fresh blood

In 2005, following the fall of the "quiet men" Iain and Duncan Smith (who were so quiet their fall made no sound at all), Howard became party leader with no opposition. Howard was quick to form a new shadow cabinet saying he was "keen for some fresh blood". In another spate of innovation he changed the party's slogan to "Are You Thinking What We're Thinking", successfully completing the process of creeping out everyone in the UK. Howard was party leader during the British General Election of 2005 when the Conservatives lost again to Tony Blair's Labour Party. Following this defeat Howard announced his resignation as party leader, saying that his failure should be "no reflection" on the future success of conservatism. He was replaced by David Cameron. The temperature at Conservative HQ was alleged to have become noticeably higher.

Michael Howard lives in a large detached Victorian mansion in Wales with the putrefying corpses of his wife and three children. His hobbies include playing sinister organ music late into the night, tending to his pet bats and cackling. There has been some controversy involving young female asylum-seekers who have gone missing only to be spotted in Howard's mansion late at night dressed like My Chemical Romance fans. Howard has dismissed any wrongdoing saying "They only came round for a quick bite!"

Michael Howard is a lifelong member of the Westlife fan club. He has said of the boys "They always seemed so fresh and innocent, with beautiful pale necks."

After stepping down as leader of the Conservative Party, Howard was offered the lead role in the Andrew Lloyd-Webber musical Something of The Night. Howard turned down the part, which was filled for the play's world premier in Cleethorpes by the re-animated corpse of Bela Lugosi.