For those without comedic tastes, the so-called experts at Wikipedia have an article about Freddy v. Jason.

Truly a match to be savored. The amazing boxing match between the worlds ugliest pedophile and the worlds ugliest murderer.(Some speculate that the Predator is indeed uglier than Jason but no one is really looking to test that.) The world watched in shock, anticipation, or with a fist full of Benjamins in some cases as the match came to a close. 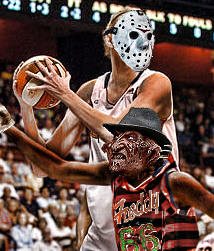 Round 1, Jason is just too tall for Freddy

Freddy was too much like a pedophile to enter any normal boxing league and, Jason just creeped people out. So the only option left open was, of course, the annual Monster Mash boxing tournament held at Count Blackula's pad. Even there however, the two had trouble entering. Neither of them could really be considered monsters. Just fuck ugly. Being fuck ugly doesn't qualify you for a boxing match at Blackula's. Of course, this didn't stop Freddy or Jason. After talking with the review council.(Who all indeed agreed that they were both incredibly painful to look at. They also commended Jason for having the decency to hide his ungodly face.) They were both denied entry. Freddy still didn't give up. So instead of leaving he decided to threaten the review councils children. He was quoted as saying, "I'll touch your faggot children and make your mattresses smoosh them into blood soup!" After a good sleep on it and a few funerals later the review council decided to reconsider Freddy's application to enter the tournament. Jason however, did not say a word. He simply returned with a sleeping bag full of hologram hookers(How this worked exactly isn't known but we hear that the incident was later adapted into movie form with the name of JasonX.) and beat the review council members until they signed his application. 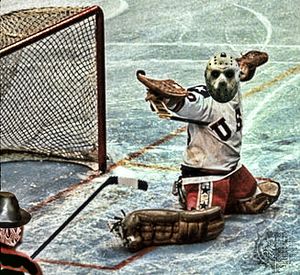 Although it is true that both Jason and Freddy joined the boxing tournament around the same time they are not rivals. This is a common misconception and the whole thought of it was even made into a crossover movie bomb called Freddy Vs. Jason. These rumors were dismissed after the title match when the Swamp Monster reportedly said, "I think Freddy and Jason are great pals. Although the whole 'going into the closet and turning off the light' deal kind of creeped me out. Oh, and there was that one time Freddy took off Jason's mask. We found out that night just how powerful Jason's right hook was." However, the reporter interviewing the swamp monster was never found after that day and was apparently 'Glomped'.

If you pay careful attention to the boxing match, you can see Chuck Norris standing in the corner. This is not because he's scared. In fact, Chuck Norris was Jason's manager. He taught him everything he knew. He considered being Freddy's manager as well, but, in his words, "That Freddy is such a little bitch. I met him in Koh-reeuh and he was a total bitch. That was when I assassinated Jesse James -- originally, Freddy was slated to perform that assassination. He was just too much of a bitch."

The fight between Freddy and Jason lasted an astounding 3 rounds. This might be because you can't cut someone in their sleep when they're beating you in the face. Freddy did quite a bit of damage to Jason as far as normal boxing goes. However, when you're facing the gigantic haunted corpse of a deranged cock-blocking(and definitely killing) retard its kind of hard to really make any dents anywhere. Freddy's head was literally punched off during the fight and caught by some ecstatic fan. Jason then took out his cleaver(Which disqualified him) and began stabbing the corpse over and over and over again until the Blob and the swamp monster were able to restrain him.(This was of course after flinging his machete at someones face that landed with deadly accuracy and provoked surgery bills later.) Freddy blamed his loss on the fact that people just don't seem to believe in him anymore. 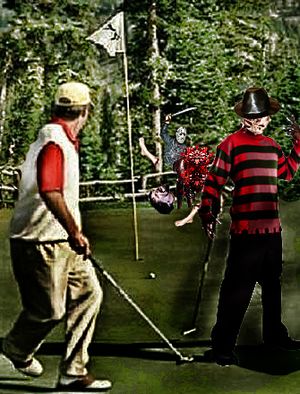 Jason becomes too pre-occupied with chopping up Caddies, leaving Freddy to dominate to tie the series 2 all

Freddy being the poor sport that he is,(and having one hell of a headache) haunted Jason in his sleep by forcing him to watch images of his mother being beaten and drowned by beavers. Freddy though adding the beavers would create a sort of perverted and somewhat relevant irony. Jason still kills camping teens who are doing the dirty because he's a prick. Freddy is still turning people into mattress n' blood soup in an attempt to make people fear and believe him. Neither of them have entered another Boxing Tournament since (someone forgot Freddy vs Jason vs Ash comic???) but, if Jason could 'convince' Blackula's Review Council (Who recently got security guards) to let him box again he probably would. As always most people avoid seeing either of the two and someone confused Freddy with Micheal Jackson again.