From Uncyclopedia, the content-free encyclopedia
(Redirected from The Twilight Zone)
Jump to navigation Jump to search 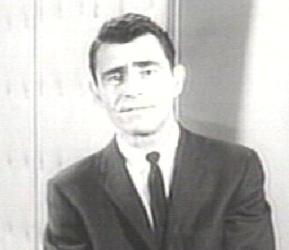 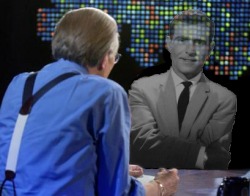 Rod Serling on a recent interview with Larry King.

You access this article by clicking on a link of the imagination - a link not only of sight and of sound and of hypertext markup language but of mind. It is the middle ground between light and shadow, between trolls and spammers. You just crossed over into... the Uncyclopedia Twilight Zone article!

Gee! An article about The Twilight Zone! You've always enjoyed that particular show. Perhaps this article will illuminate certain aspects of that televisual classic!

Picture, if you will, a person very much like yourself, sitting at a computer - much like the one you're sitting at now. But how can this hypothetical person be like you? After all, they've just clicked their way into… the Twilight Zone.

Wow, this article sure is creepy. It's not like a usual Uncyclopedia article. No one's even mentioned Oprah or Oscar Wilde. You're getting scared. Perhaps you'll get out of here at the next link.

Ah! That link just took you right back here! Okay, okay, stay calm… there has to be some way out. Oh, God, you hope it's not a gremlin in your CPU… Maybe it's aliens… no! That's crazy talk! Got to stay focused… Okay, think - what link has to work in Uncyclopedia…? … Got it! Ass! No, even that didn't work! bottom! wee-wee! front-bottom! Ahhhhh! ctrl + alt + down! that always works!!

Okay, try putting a quarter into that fortune-telling box that looks like the Devil! Nothing? Goddammit, this is bad!!!

Dimension of the Imagination

Oh, God, it's just like that Old Gypsy Woman foretold! Oh, you were a fool to mock her magical powers! Now the curse of the Inescapable Page is upon you!

That being you thought was your clone is in fact an alien robot from the future named Brad Cohen! AND HE'S BEHIND YOU! NOOOOOO!!!!!

THiS is an illusion of the twilight zone!! Teletubby land!!!!!!

another illusion of the twilight zone. CAUTION: make sure your eyes are not drunk!!!

It seems reading this article about the film sends your indestructable mind into The Twilight Zone. The film is pretty much just four episodes of the twilight zone glued together and during the filming three people died in a helicopter crash.

An episode titled "Nightmare at Some Considerable Distance from the Ground" was pulled off the air due to extremely high levels of blood and gore for the time. In the episode, an airline passenger, played by Oscar Wilde, spots a grue on the wing of the plane. No one believes him, until the grue breaks into the plane and devours everyone inside.

Middle Ground Between Light And Shadow

And so that is the tale of yourself. An average sort of person who logged onto a not so average page, from which you can never escape.. somewhere… in The Twilight Zone.