From Uncyclopedia, the content-free encyclopedia
Jump to navigation Jump to search
Warning: This will probably make no sense to you.
This article may be hilarious if you are familiar with whatever it pretends to explain, but otherwise you will probably have no idea what the hell is going on. If you can think of a way to make it more accessible, make it so.

For the religious among us who choose to believe lies, the self-proclaimed experts at Wikipedia have an article very remotely related to Pennywise the Dancing Clown.

You may be looking for Tim Curry and not even know it!

“They float down here!”

“You stole my idea!”

Pennywise the Dancing Clown is a well-known mass-murderer and pedophile. For a long time, he dwelled in a sewer and molested and ate children until he was defeated in a presidential election, and settled on handing out balloons at Neverland Ranch. After that, he changed his employment several times more before finally settling on being the thing he represents most, a Catholic priest.

Birth of Pennywise the Clown[edit]

Who Is Pennywise The Dancing Clown? 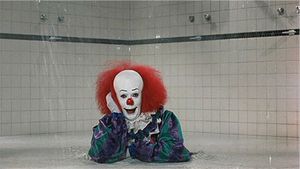 Pennywise is seen here in one of his favorite places: the drain of the men's shower room.

Pennywise the Clown is not really a clown. Pennywise the Clown is NOT really carrying out the killings of Derry. That is far more powerful than just a human in a clown suit. Thisdemonic monster possessed a circus clown by the name of 'Bob Gray' over 200 years ago. This demon chose Bob so he could get closest to his prey, the children.

IT feeds off of little kids. It manipulates them into thinking it's a clown making them feel safe and secure. C'mon, who really thinks a clown would hurt them? Then when the children are oozing with fear, he goes in for the kill. Which is usually tearing an arm off or biting into some one's armpit. For some reason only the children of Derry can actually see Pennywise.

The adults just stopped believing and they cannot see him at all. Pennywise is your worst dreams come true, We can not even picture this evil. Pennywise comes back every 30 years to eat. He will usually stay around until he is full and he will sleep for the next 30 years and so on and so forth. Pennywise will never die, something this evil will never die. Le clown est méchant.

Q: Is a Pennywise a Pedophile?