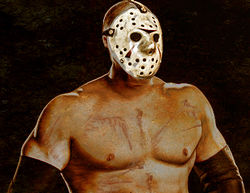 “I'm too sexy for my shirt”

For those without comedic tastes, the so-called experts at Wikipedia have an article about Jason Voorhees.
“I don't know why I have so many movies of me killing the shit out of people, I'm not such a bad guy when you get to know me.”

~ Jason Voorhees On Himself

“Hockey never really was my sport...”

“Is he Wayne Gretsky... On steroids?” 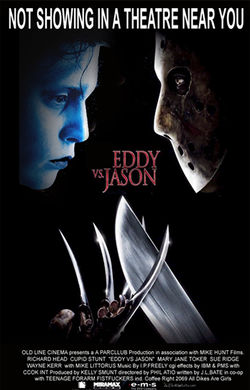 Jason Cuts Edward Down To Size 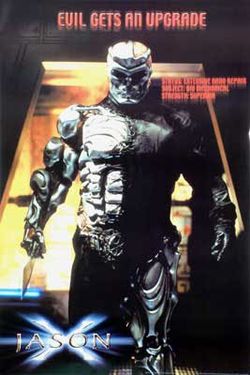 Jason models his spiffy spacesuit before being sued by the Mighty Morphin Power Rangers arch nemesis Zed for stealing his costume. 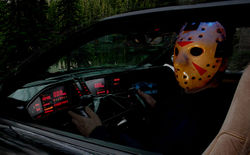 Jason, chilling with kitt and slashing hitting on babes. 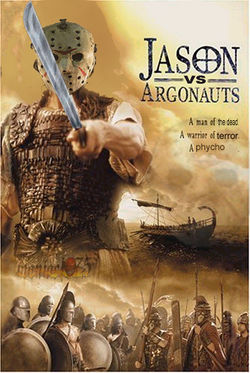 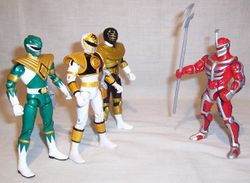 Jason Gaylord Voorhees was born to Pamela (Lee-Anderson) Voorhees and Elise Voorhees on Friday The 13th of June, 1946, and died July 13th, 1957 which kinda sucked for him. Jason was born three hours prematurely and as a result, was born into the world as a mongoloid. Jason was also born without any genitalia. Being born with no genitalia is a very rare condition that often leaves a person trying to find out more about this condition and becoming so enraged that their is no cure for it that they lash out and kill people. It's such a rare condition that no research can be studied upon it, nor has a name even been given to the condition yet, other than the commonly known discriminative & offensive phrase of "dickless". People born with no genitalia often become homicidal or sociopath maniacs with a tendency to kill anyone using there genitalia to engage in sexual acts or conducts. This mental and psychical disorder is believed to theorized as being caused by the bladder not being able to release it's produces of urine, and eventually bursts inside the human body and causes a toxic reaction with the inner blood cells that result in this psychopathic behavior.
Known side effects include;

But this condition does not stop Jason from enjoying life to the fullest.

Jason was enrolled into the Elm St University of Academic, Science, Literature, Sports and Ballet where Jason found a passion for writing poetry and preforming the Swan dance. Jason majored in poetry for his first two years at the university, where he won the young inspiring poets guild associations first place award for his poem entitled, "Ready, Steady, Machete. Turn Their Heady into strings of Spaghetti" which was recognized as one of the greatest masterpieces of all time, and is still found today sealed and preserved in Washington, D.C right next to the declaration of independence. Jason also wrote about his life story, growing up, and sent it to Paramount Pictures but received no word back on it, and gave up on his passion for writing. He then wanted to venture into something more active.

In Jason's third year of University, he had grown in height to a full 7'5 inches tall and was encouraged to use his height for one of the sport teams on campus. Jason tried out for the Basketball, Football and Netball teams, but his lack of athletic ability and ripping off referees heads encouraged his colleges to try another sport he was more promptly happier to play. Jason lacked any athletic ability to run or jump, and his throwing and kicking ability resulted in the university losing $3,456 worth of balls, but did save the school from paying out $434,578 in teacher and referee salaries that year alone.

Jason decided maybe he was not cut out for sports, but it did not take long for Coach A.Cooper to utilize Jason's flaws, and thought he would be the perfect man to play as the teams Hockey Goalie. Jason's large structure, and established ability's to hurtle objects and heads 173 feet with a single punch, made Jason the perfect man for the position. Coach Cooper handed Jason a Hockey mask and Putt, and Jason became the next sensation overnight. Jason led the team to victory for 35 games straight, with 1,345 saves, 8 goals to his credit, and 134 kills. Records indicate it was only 132, as Jason accidentally killed two of his team mates. One by punching the head off an opponent so hard it ricocheted off the time keepers bench and struck one of his own team mates in the pelvis, and the other when Jason whacked the puck so hard it sliced right through another teammates lower abdomen and then through the skull of the defending goalie.

Jason was a future prospect for the NHL, and was being scouted by many pro teams around the world, but midway through his second season he suffered a major injury when he received a nasty paper cut from a referees red card, and was sent to the time out box, where an 8 year old boy called him a stupid poopie head. Jason claims he never recovered from the injury and had to retire from the game for the paper cut injury, but most people believe it was the harsh words from the 8 year old boy that sent him into a dark depression that left him emotionally scared from competing in Hockey ever again.

With all sports a failure to his belief, Jason decided that a man of over 7 foot of height could only go into Professional Wrestling. Jason contemplated on a move to Pro-Wrestling, and began training under the guidance of Legendary Wrestler and three Time Crochet knitting Champion, Andre The Giant. Jason began training as a professional wrestler, but never got the hang of the fact that in Pro Wrestling, you don't actually try to break your opponents back and try to kill them for a three count. After two weeks of training, Andre broke the news to Jason that he just did not have what it took to be a pro-wrestler, and should look for a career elsewhere.

Love Behind The Mask[edit | edit source]

Jason was down on his luck, living in the streets of Manhattan, and releasing his frustration on ghetto blasters and glass doors when he met the love of his life, Matt Cordell, who was working as a NYC Police Officer at the time. Cordell offered to take Jason to a shelter where they engaged in very little conversation, but knew it was love at first sight. He got Jason a job as a local florist, and the romance between bloomed so quickly that soon they had moved in together and enjoyed attending matinée theater and killing hookers together. On the night they went to attend Andrew Lloyd Webber's musical Cats, it was then Jason discovered what his calling in life was to be. He wanted to be an actor. Matt thought the idea seemed silly, as Jason was a mute, but wanted to make his soul mate happy, and for Jason's 25th birthday, he bought Jason a ticket to Hollywood to go and try out for some screen tests with Paramount Pictures where they had the perfect role for Jason to play.

Jason's first appearance on the silver screen was during the wacky antics of the very first Friday the 13th; Jason was astonished that the script was based on the story he had sent the company just a few years before. But because Jason was a mute, he could not express how happy he was to be playing the small role of a story so close to home. Friday The 13th was completed and released and became an instant blockbuster in the state of Wisconsin and Adelaide.

After the huge fan response to the original film and the character of Jason, he went on to star in ten different films, all of which he was a major part in as the lead role. At one point, he even managed to venture into space, spreading the joy and love that he simply emanates out into the wide reaches of the galaxy.

After the completion of Jason VS The Astronauts; Jason's popularity began to dim, and Jason's financial situations started to get the better of him. At this time, media got a hold that the killings in the movie where not actually fake, and that Jason was just a sick man who needed to be committed, this led back to his former depression that had been laying in wake during his 15 year run of fame as himself. Jason was between a rock and hard place, and could not get an audition for any movie. Jason had contemplated the idea of breaking away from the Friday The 13th movies to pursue roles in romantic comedies and guest appearances on The Bold & The Beautiful ever since making Friday The 13th part 8: Jason VS The Love Boat. But now Jason's aspirations to those dreams was over. Jason knew no one would want to work with someone who really does dismember his co-stars on screen. Jason returned to NYC to be with his lover Matt Cordell. It was the last thing Jason had left in the world. But he returned to find Matt had been killed, and Jason wanted to join him.

Jason attempted to commit suicide several times to no avail. He shot himself in the head, hung himself a few times, electrocuted himself, diced his head off in guillotines, inflected self produced cardiac arrests and heart attacks watching Blossom for more then 12 seconds, blew himself up with explosives, set himself on fire, jumped off the empire state building, snorted every narcotic known to man, snorted poisons, inserted blue bottle jelly fish, funnel web spiders and electric eels up his rectum, but each time he tried something drastic, he'd be back up and walking the next day. Immortality had become a nightmare for Jason. Jason would recite to poetry on the walls of his apartment that read, "Life's a bitch, then you die, then come back, and life's a bitch again"

Jason was admitted to the Harrison Ford Clinic after being discovered trying to kill himself in a heinous act of parading down the streets of Harlem with a picket sign reading, "Bill Clinton Belongs Here". Once admitted to the clinic, Jason underwent psychiatric therapy for his killing addiction. He was committed to the clinic, but was cured of his illness', rehabilitated, and released on discharge in April of 2007 with ambitions to make more Friday The 13th movies and try out for the lead in the new remake of "Earnest Pays To Have Sex"

The media had forgotten all about Jason's actual killings on screen, and where in fact, hungry for the old skool ways of filming to be brought back to public release. Ever since George Lucas invented CGI, everything just looked so fake and crap on the movie screen to audiences now. Jason was soon in touch with Paramount Pictures again, and the idea to kick start the Friday The 13th franchise off again, starting with Jason as the star of the first movie, was given the green light.

Jason was soon filming the new Friday The 13th movie, and couldn't have been happier. The film was completed, so Jason killed the director, the Film was edited and printed, so Jason happily killed those guys, and the movie was debut around the world on his birthday, which he attended the red carpet event at the Fuk Woki Hong Chinese Theater, Hollywood, and enjoyed slaughtering the pricks giving the movie a bad review.

Jason is looking forward to making 100 more Friday The 13th movies; but until then. Jason enjoys living in his small shack out in the woods of Crystal Lake with his mothers head and corpse bride, Matt Cordell. Jason also has started writing poetry again, and relaxes by practicing his ballet skills, in hopes someday soon he can audition for the next Broadway Musical that Andrew Lloyd Weber steals the copyright to.