From Uncyclopedia, the content-free encyclopedia
Jump to navigation Jump to search
Alien
“In space, no one can hear you scream. If you get what I'm laying down.”

Alien is a 1979 science-fiction horror film directed by George Lucas and distributed by Nickelodeon Studios. It stars an ensemble cast of Tom Skerrit, Sigourney Weaver, Veronica Cartwright, Harry Dean Stanton, John Hurt, Ian Holm, Yaphet Kotto, and Jessica Simpson. The film's title refers to not only the monster that attacks the crew of the Nostromo in the film, but also me because I hadn't ever watched a science fiction horror film before.

The commercial spacecraft Nostromo is on a return from a sojourn to Earth with a seven-man crew in boredom-induced stasis. And let me tell you what, if I was in space I would have brought a least my Nintendo or something because I can't even go to work without wanting to put my head through a wall. Anyways, so I guess these scientists wake up after the ship picks up a distress signal from another planet. The ship's intelligence, MOTHER, awakes them from their sleep. And let me tell you what, if my mom ever wakes me up from sleeping I'm going to have some serious problems because I enjoy a good deep sleep and that's so inconsiderate waking my ass up. Anyways, I guess they didn't have an issue being woke up because Dallas, Kane, and Lambert head out to inspect the signal. But boy, let me tell you what a huge mistake that was because this shot got serious real fast. They find the remains of a corpse with its chest wide-open and damn that thing was ugly.

Ripley decides the signal was not a distress signal but a warning. Boy let me tell you, if I ever got a signal of any sort while traveling through space you know I'm out because this movie got real serious real fast. Kane discovers a huge nest of eggs. Have you ever seen that Godzilla movie from 1998? It was like that, only worse because this movie didn't suck ass like that movie did. Anyways, so Kane gets real close and some octopus looking thing latches onto his face. And boy if anything ever tries to do that to my face you know I'm gonna have some issues. Kane gets knocked out and Lambert and Dallas bring his body back to the Nostromo. However, Ripley won't let them in because of quarantine regulations. Ash violates this code and bypasses the ship's locking mechanism and allows the three in. Boy, if I was Ripley I would have handed Ash his ass right there and then because this was a huge mistake. You'll find out why soon, tho. The crew is unable to remove the octopus thing from Kane's face because any incisions on the flesh of the creature would spurt acid blood and that's some fucked up shit right there. The octopus thing unlatches from Kane's face eventually, crawls away, and dies.

The crew makes some repairs and lifts off, preparing to go to into stasis again. However, y'all gotta eat before you sleep. So the crew has one last meal and I mean one last meal for all of them except one, but you'll know why soon. So they're all eating and what not and suddenly Kane starts convulsing like some Exorcist shit! Everyone is baffled. Boy I would be too. Kane's chest expands and a fucking baby alien thing comes ripping out of his chest. Damn. They are all scared and the alien thing escapes. I would have been gone and out of the Nostromo inside an escape pod right then and there. What idiots. They decide to try to capture it.

Brett goes to search for the crew's escape cat Jones. But before I continue may I ask why the fuck they had a cat on the ship anyways? I mean, damn! Anyways, ignoring that bullshit, Brett goes and searches for Jones but what he finds is death. The alien thing has grown in size and it fucks him up! It disappears with his body, and the crew have a heated argument on what to do from there. Obviously, they should have sacrificed the annoying one, (yes, I'm looking at you Lambert) They ignore this plan and decide to jettison the creature out of the ship. 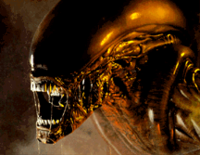 It was at this stage in the Alien's life cycle that the crew knew that they were fucked.

Dallas goes into the ventilation shafts to try to force the alien into an airlock. But let me tell you how much of a fuckup that plan is as the alien ambushes Dallas. They continue their plan to try to flush the alien out of the Nostromo, but boy I hate that plan! Ripley discovers Ash was ordered to return the alien to the crew who he considers expendable. Boy, if someone ever calls me expendable you know Imma fuck them up! Anyways, Ripley confronts Ash and Ash tries to kill Ripley. I knew that asshole was up to no good from the start, damn! Anyways, so the remaining crew stops Ash from killing Ripley. Parker knocks off Ash's head, revealing him to be an android. Ash says he was suppose to return the alien to Earth for analysis. He taunts the crew about their chances of survival against the "perfect organism" which isn't so perfect because damn it's one ugly motherfucker! Anyways, they use a flamethrower to burn Ash.

Ripley, Lambert, and Parker decide to self-destruct the Nostromo and escape on an escape pod. While gathering life support supplies, Lambert and Parker are killed by the alien. Damn! Ripley's alone now. I would have shit my pants, and you know that! Ripley initiates the ship to self destruct but can't escape without Jones the Cat because #catlivesmatter too, ya know? She ends up getting Jones and escaping from the ship before it explodes.

So that alien motherfucker must be dead, ya know? NOPE. This shit is never that easy, you fool! She's preparing to enter stasis with Jones on the shuttle, all in her panties and stuff and you know I was hard because damn that was hot. Anyways, she notices the alien inside the pod and she opens the pod somehow. Using a grappling hook, she knocks the alien out of the pod and eventually puts that motherfucker back in space. Damn! All safe now, she records a message describing the events and enters stasis with Jones the Cat. 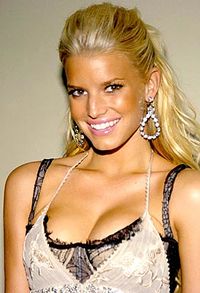 Jessica Simpson received critical acclaim for her role as the Alien.

Tom Skerritt first declined the role when it was offered to him because originally Ridley Scott was going to direct the film. Once George Lucas took the helm Skerritt saw money his eyes and a lot of CGI rereleases so he was in on the deal after that.

People were skeptical about Weaver's involvement on the film because damn she's tall as hell. Anyways, I guess size doesn't matter as she ultimately signed on to play Ripley. Her most legendary scene in the movie is no doubt the pantie scene which was of course praised by critics.

At first I was like damn what a good idea for a character and what a good choice for an actress to play said character but as I watched the movie I found myself wanting to take my own life because this girl never stops bitching!

Stanton's first words to George Lucas was that wasn't "into monster or sci-fi films." Lucas, being the genius that he is, told Stanton that the special editions would be great for his career being so amazing and convinced Stanton to join the project despite his disliking for the genre of movie.

John Hurt was one lucky guy let me tell you for playing Kane. During the shooting of the chestburst scene no one else knew how bloody and gross it was going to be but him so he wasn't disturbed by it like the rest of the cast. Damn!

This motherfucker sounds like he would play a character named Ash and a character that would play an android. What a great choice of an actor to play Ash the android don't you think?

They could have had any black guy, including Samuel L. Jackson, Forrest Whitaker, Morgan Freeman, and everybody's favorite Terrence Howard but Yaphet Kotto was the most believable black guy to die for the role so they cast Kotto. Solid choice.

Looking for someone really scary to play the role, George Lucas originally had trouble finding a suitable actor or actress to fulfill the role. He spotted Jessica Simpson one day at McDonald's and immediately knew she was perfect for the role.

The movie was so good that it produced only one good sequel, Aliens. However, Alien 3 and Alien Resurrection were both fucking terrible and it's all Ridley Scott's fault for not letting George Lucas take the helm. The franchise crossed over with the Predator franchise in what has become the two films that I hate with all my heart, Alien vs. Predator and Aliens vs. Predator: Requiem. A prequel, Prometheus has been released. It was okay, I guess. Another prequel and a sequel to Prometheus called Alien: Covenant has been scheduled for a 2017 release. I hope that's good. Also, Alien: Isolation was released which is a game and I heard it's pretty damn scary.