Trve Bl00d is an American horror series show from HBO about a bunch of fairies, vampires, werewolves, shape shifters, witches, and gay black people living together in harmony in New Orleans, America. The show's themes are mostly true love, AIDS and the Norwegian black metal band Satyricon. Because the show is so heavily inspired by Norwegian black metal, it is also very anti-religious, even though all the characters except the werewolves are extremely religious people. According to Trve Bl00d, God is a hot naked woman covered with blood, who is replaced at some point by an ex-aristocrat vampire named Bill, who is eventually killed by a New Zealand/Canadian fairy. So Trve Bl00d is the first show/movie ever in which God is being killed, which is awesome of course.

The show is about to be rebooted, which means that God would be reborn and start annoying us again with world wars, holocausts, viruses and even more rebooted TV shows and Hollywood movies. This reboot must be stopped. This article will explain why.

Trve is from the black metal scene, and also the only word in black metal slang. The black metal slang was invented just for this single word. It means being genuine and not fake. Because there are people who pretend to like black metal, in the sole purpose of fucking hot Scandinavian chicks. So we invented Trve, which is an actual black metal fan. Talking about this issue with non-trve people is strictly prohibited, so I expect to get gangbanged in the rectum by Russian commando soldiers pretty soon. This is not a problem.

Bl00d references the female gender, because it's blood that comes out in the toilet. So Trve Bl00d is "a real woman". What makes a woman a woman? Her womb? Her period? Good question. Is Tara a woman? She's a black lesbian vampire who cannot get pregnant. On the other hand, she's extremely hot.

So according to Trve Bl00d's terminology, the show is actually about human beings. And not about God. So God should totally stay dead in the Trve Bl00d universe.

Bill was dead for the entire show, but now his condition is worse than Vladimir Putin's. (He's not just already dead, he's a puddle of blood that has dried in the ground.) And there is no show without the character of Bill. He's the TV equivalent of The Terminator, for Christ's sake. A nonhuman thing that turns out to be the most human thing in the show. It's like they tried to do Dexter without Jennifer Carpenter all over again.

Some things are better left dead. Especially God and Trve Bl00d. And the USSR, of course.

But if you're actually doing this, then you must reboot The Love Boat and Hitler too. 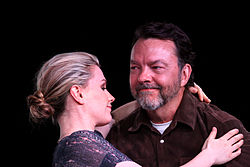