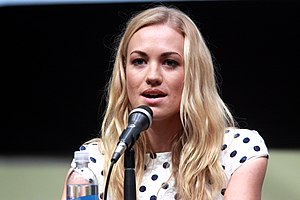 There are no Deryl Hannah pictures on WikiCommons, so.

GILEAD, North America -- Australian-Polish-Argentinian actress Yvonne Strahovski of Dexter fame was kidnapped and tortured by Spotify executives last Thursday. According to Gilead's biggest news website, The Passion of Gilead.com, both of Strahovski's shoulders have been surgically removed, in response to the removal of Neil Young's albums from the Swedish music service. "We are proud to help the Swedish empire of music of Spotify in its difficult time", said Passion chief editor Robert Langdonski. "Sweden is a very weak country, because it's so Goddamn liberal, just like Canada. We had to help them kidnapping Neil Young's wife and making it impossible for her to ever get the vaccine. Just like in her movie Splash, where her ass completely disappeared right in the middle of the movie (several times!) and her movie Kill Bill where her eye was removed. Maybe this will teach Neil Young how to listen and obey the empires of the world."

As Gilead continues to threat to invade Canada, Russia to invade Ukraine, and England already occupying Scotalnd, this might be the start of World War III. Of course, Neil Young's wife is Deryl Hannah and not Yvonne Strahovski who has played Hannah in Dexter. It's still unclear if the Gileadians made this mistake in purpose or by mistake, but one thing is clear, Yvonne Strahovski will not get vaccinated anytime soon.

In response to all this, Poland has decided to invade Germany, Australia to Ausxit Britain, and Argentina to cry. In addition, it seems that Scottish rock band Franz Ferdinand will represent Scotland in the upcoming Eurovision Song Contest in Turin, Italy. Luckily, Bosnia is too broke to participate in the contest, and so it seems we are saved from another World War, once again.

Meanwhile, as a result of Spotify completely lacking the song "Unknown Legend" by Neil Young, and Wikipedia lacking an article about the NWOBHM band Legend, the only empires left in the world are Facebook/Meta, Eurovision 2018 winner Netta, and Peta. The British still have Gibraltar and Québec for about 4 days or so.

We'll continue to report from the front as soon as we watch South Park S25E2. Cheers.