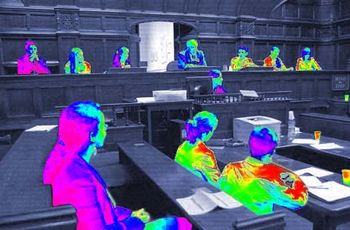 The Predator legal team was second to none.

Alien v. Predator, 666 U.S. 1337 (2004) was a landmark Supreme Court case on abortion rights. The court ruled, in par with federal law's precedence over state law, that abortion for Xenomorph Queens was a right that conditionally adhered to the right of privacy as granted by the Due Process Clause of the Fourteenth Amendment.

The Alien v. Predator decision prompted national debate that continues to this day over whether and to what extent abortion should be illegal, who should decide whether or not abortion is illegal, what methods the Supreme Court should use in constitutional adjudication, and what rights (if any) parasitoid extraterrestrial species have by the Constitution.

For those without comedic tastes, the so-called experts at Wikipedia have an article about Alien vs. Predator. 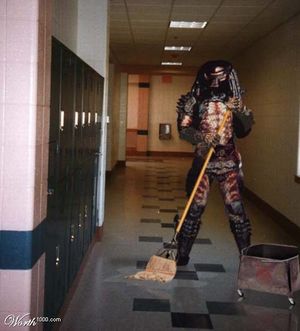 Predator, working as a janitor prior to the case.

Alien and Predator were a happy couple living in Liberal Groves, California. Alien was a young medical student and Xenomorph queen working her way through medical school, and Predator was a young alcoholic janitor working his way through liver failure. It was a match made in heaven. Until one day, after a night of passionate lovemaking, Alien discovered that she was pregnant.

Naturally, Alien was shocked. The couple felt they were not prepared to support a child. Plus, the fact that it would have to burst out of Predator's chest and kill him was a bit of a downer. So Predator convinced Alien to go to the local Abortions-Я-Us to remove the fetus.

Unfortunately, Alien changed her mind and decided to keep the child after she discovered it was required to have a 24-hour waiting period; during this time Predator filed a lawsuit on the basis that his child had a right to death.

The Supreme Court pondered many issues during the deliberation. These included:

The Court came to a 6-3 majority decision to strike down California abortion laws and make all other state laws in confliction with the ruling null and void. The vote tallies were as follows:

Dissent was led by Chief Justice John Roberts and followed by Associate Justice Antonin Scalia. Antonin based his dissent on the fact that the couple in question were in fact illegal immigrants who could not provide documentation of their citizenship:

Associate Justice Clarence Thomas was quoted in an interview outside of proceedings as saying, 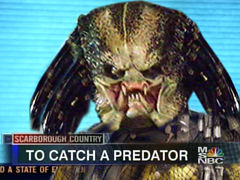 The media's response appeared biased to some. Predator was often portrayed as an alcoholic wife-beater, pedophile, and murderous savage humanoid alien.

The media descended in a frenzy. "Alien vs. Predator" became the media fad of the week, with feminist groups and 'right-to-lifers' on the side of Alien and 'pro-choice' groups and most men on the side of Predator.

The Bush administration was asked to provide an opinion on the case, but given the nature of the issue it's completely understandable that George W. Bush hid in a bunker until three months after the case was over.

The case sparked continuous debate over the legalities and technicalities of abortion. But one of the more interesting aspects of Alien v. Predator was the personal aftermath on both Alien and Predator themselves. Due to the extremely short gestation of Xenomorph babies, Predator's face was latched onto by a facehugger and implanted the fetus in Predator's chest, which shortly exploded.

Thus, Alien's baby was born before the Supreme Court made its ruling. Despite this, the ruling was important in what it accomplished for other Xenomorphs and personal opinions on abortion.