From Uncyclopedia, the content-free encyclopedia
(Redirected from 666)
Jump to navigation Jump to search
Whoops! Maybe you were looking for Santa?

~ Satan on putting pineapple on pizza 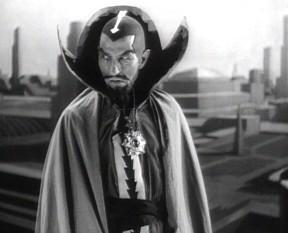 From his years in Hollywood... (This is actually an actor playing Ming, but he looks like Pan if he were angry, ah, I mean Satan, doesn't he? A very underrated actor. Let's find out more about him.)

Satan, also known as The Devil, is the primary antagonist in the best-selling novel The Bible. His character is usually comically considered the epitome of evil, and he is often feared, mocked, or just marginalized. Satan's image, the horns and the rest was pulled from Saturn's Uranus when the Christians decided to huff a few gods like the Greek god Pan from people's consciousness. This started a trend of turning loved archetypes into an "evil scary" presence though the wonders of propaganda, a theme which continues throughout the story.

He may or may not be the CEO of Literally Satan Media, LLC.

The Christian Version: Dispute with God[edit] 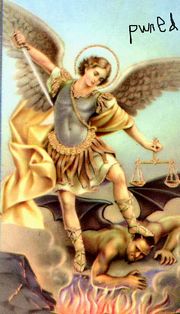 Mike taking out the trash.

Satan and God had a bit of an argument way back when over who should call the shots about what happens to the entire universe. Satan began by laying out his points in a fairly logical fashion, but that's when it all went to hell (pun intended). This discussion between the two of them was the catalyst that sparked God's pretend rage, causing some major smiting and Satan being thrown just outside of the Pearly Gates where he set up his own kingdom and a lemonade stand.

Although Satan found himself just outside the pearly gates he wasn't about to take it lying down so he summoned up legions of pretend demons from the pretend eternal fires to strike back. Meanwhile, back in heaven, God was watching this unfold. So he asked Michael the Archangel and said, "Mike, take care of it." Michael got a bunch of angels down to the gates. It wasn't much of a fight, though, as the devils cast all of the angels out of heaven into the Pit of Hell in a fashion that would be imitated millions of years later by Leonidas and the Spartans. Satan has laughed about what happened that day ever since but because Satan and God are both invincible, the dispute has never ended, except in arm wrestling and drinking contests. 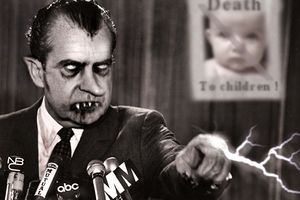 Although everyone loves to laugh at how much of a puss Satan is for getting his arse kicked out of heaven by God, he has inspired the genre of music known as Death Metal or Black Metal. Satan Himself is a virtuoso of the electric guitar: a 1978 article in Guitarist magazine described his style as "faster than the speed of light and decidedly bad-asssss." Among the Heavy Metal personalities that claim to have business relations with Satan are bands too nasty to mention. If you aren't faint-hearted,Cradle Of Filth would be a candy-floss-sweet example.

However, in a statement issued as a response to Christian groups, Satan remarked that "Many of these so-called 'Satanists' would not realize if they found themselves in Hell." This has been amusing him since the early to mid 20th century, when he invented record companies.

Satan's influence extends well beyond the field of music. He is credited with inventing the popular role-playing game known as Dungeons and Dragons that on occasion has inspired teenagers to commit group suicide as well as the MMORPG World of Warcraft (aka WoW as in "wow I can't believe it's been that long since I last had a shower") which is completely evil. If one looks at either the man hours lost to playing the game or the child fatality body count from neglect, it becomes apparent quickly that Satan had a hand in its creation as well as the improvement of the subsequent expansion packs. It is the perfect weapon for Satan to place in the hands of humanity as they will proceed to kill one another (counting in-game) as well as destroy their own "lives" if you can call them lives anymore. 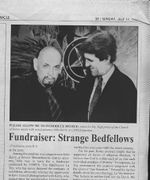 Satanists are people who follow Satanism, a cult full of people who are intent on devout absolution, that follow a decree of indulgence as witnessed by the Church of Satan. Satanists are known to be at odds with most everything Christians love, yet own control of everything the government says you are not allowed. The lair of a typical Satanist is a dark misery quorum, where a human can reflect on their actions to ponder why their peers must succumb to a feeble world. Although the description looks bad, Satanism does not worship anarchy, they are probably just seeking attention after a history of abuse observation of allies and comrades doing something against the social normality; and they know that the Christians are the worshipers and idolaters mentioned in the Bible, in research, and found in every correlation in life existing in connection with Dick Cheney, the dark lord.

In the story of the Garden of Eden God told man not to eat from the tree of the knowledge of good and evil because he wanted all animals to live in peace and have free will. Without free will there is no love, so when Satan told man to eat of the tree he gave him the ability to love. People find this funny because:

Other benefits for Satans followers include Free Heating, being allowed to torture people and all you can eat BBQ meat for the rest of Eternity.

Many people have made endless attempts to decode the number as it seems to be related to a man.

Most likely the number is pointing to a hu-man's own ego. By flipping and turning the individual numbers the word ego can be displayed.

Calculating the number therefore shouldn't be done by a calculator but using one's wisdom using insight as the Bible instructed to do.

It's by far the most logical explanation, as every human has his or her own ego and therefore everyone has a shadow side in his or her personality, which can do bad things. 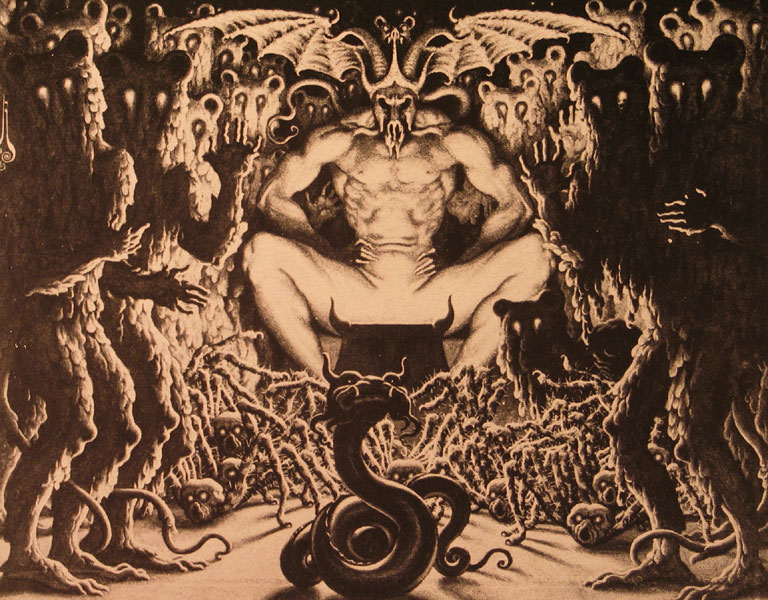 Oh come one, this is just unrealistic. Do you really think that buff-Satan would be hanging out with all those bears or mickey mouses or whatever they are? And what's with the snake?