From Uncyclopedia, the content-free encyclopedia
(Redirected from Electronic Arts)
Jump to navigation Jump to search

Epically Atrocious video game company, also known as "EA", is a company eating company who is responsible for 90% of video gaming faggotry around the industry, and is the largest video game company ever because it enlarges it's bulk by eating other video game companies, turning them into the legion that is EA. Over the year they had absorbed company after company and turning the company's specialities into pure, uncondensed shit. Yet this menance cannot be stopped since once it gets stopped it will A Splode, taking down video game industry with it. It is proven that EA will cause the second video game crash. 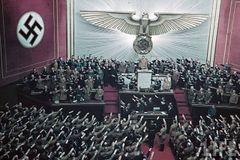 Larry Probst and his legion of doom, designed to destroy and consume video game companies.

Originally EA was a humble PC game company who created games for computers. However, due to Larry Probst's jew greed, he started to build his conquistador army to colonize other video game companies in order to inflate the bulk of his company. This has started by eating distinctive software inc who produced quality racing games. Angered by their high quality creations, he started to express his unbridled wrath and jew greed by consuming it and turned it into part of his empire of Video Gaming. Ever since then, he thought this is an excellent idea to destroy his rivals and He then started the "Great Video game conquisition" which in the process the monster he created will start consuming minor companies until EA is the only video gaming company which exists. After then Westwood, the Great company who produced the most quality RTS games of Dune and Command & Conquer and Maxis, who created simulation games such as SimCity, The Sims and Spore, were eaten by the gigantic, rotting and man eating company devouring beast as well. Ever since then Command & Conquer, The Sims and SimCity has been reduced from a great video game series to a GRIDS-ridden pile of shit that nobody should play.

Over the years This gigantic rotting pile of faggotry has expanded to epic porpotions. Millions of video game companies had been consumed, and their carefully-crafted franchises had been turned into raw, uncondensed piles of shit and fat. In 2006, it ate mythic entertainment and since warhammer has been turned into shit. In 2007, it found pandemic studios a threat to it's survival, so it pwned it by consuming it along with BioWare. in 2009, it shut down pandemic studio's office for the lulz, so other video game companies will fear their unbridled jew wrath. Of course it caused Protests around the video gaming industry. It doesen't care (mostly due to greed.) 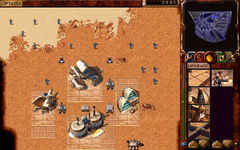 A westwood game before EA ate the company

A westwood game (in fact, any company consumed by EA) after EA ate the company

In 2011, it ate one of the greatest heroes ever known to video gaming, PopCap, (Reasons are due to "potential competitior") And thus setting the start of the apocalypse. This means that mankind has no hope.

Epically Atrocious video game company has no sales strategy. All it does is consume once great companies and turn them into a part of it. it then choses one of their company's brand franchise's names and slap it on a piece of raw, uncondensed shit which does not resemble anything like the brand before it gets consumed. They are also infamous for their Football manager games which get produced once a year. Despite the production year and the name of the "game" is different, they are basically the same game over and over with a different name. And the worst thing is fags still buy their games, which proves that (again) mankind has truly no hope, and another reason given to hate humanity. Despite it's generous claims that they will give more resources to video gaming companies it consumes, it tolerates zero mistakes and if a video gaming company makes a mistake, it will start a massive Holocaust on the company in order to show other parts of it it's unbridled jew wrath.

EA often attempts to farm "gold" out of it's players of it's games in the form of real-life money, disguised as play money. One of the examples is after it ate PopCap, it started to add new jewels that can only be purchased via "DLC" packages on bejeweled blitz. however as anyone knows you still won't be able to break over 600000000 in a normal day. After it gobbled Maxis, online stores were opened to sell players game content that otherwise have been included in the game purchases. This has also happened in almost any game they had created since 2006; in which they charge you for at least 100 USD just to buy some weapon packages where 99% of shit inside them won't work; a surefire method to waste all your valuable money into some corporate faggotry. When Sims players got sick of this, they simply divided up most of the usual base game content up into the DLC: the expansion packs, game packs, and stuff packs. This left the base game a mere shell, next to useless by itself. They invented "pay to play" and microtransactions (ie nickel and dimeing you to death, 99 cents or so at a time, until your wallet dies of a thousand papercuts or so) before the mobile gaming industry did. They also were one of the first to bring out the mystery loot boxes, which would later be declared gambling in several countries. 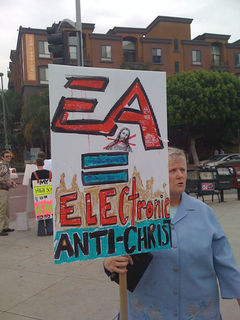 "EA IS THE VIDEO GAME ANTI-CHRIST, GET OVER IT!!!"

Epically atrocious video game company is known for it's massive negative impact onto the video game history, and thus sealed the fate that the video game industry will always be shit. Over the year thousands of video game companies were eaten by this "Magnificent Beast" and many had been destroyed inside it. Gamers ranted and moaned while companies who were eaten by the beast complained, but due to Larry Probst's usurious greed, It's conquest will never stop. and if it stops, it will cause the big bang and will take down the entire industry with it because it's too large. It is predicted that if EA continues to make shit masquraded as video games, the Great video game crash will fall onto us and all it was left is a piece of rubble and dust.