EuroSatan is a revised view of the person or demon of Satan (aka Shaitan, Baal) as put forth by the Christian Evangelical Teleological for Investigative Neo-conservativitism Society, (CRETINS). Combining theology and computer science, the CRETINS hold the key to prophecy in the cutting edge field of Bible Code Interpretation. The heart of their operating system is a renovated airplane hanger packed with rabid Evangelical Christians, each working an abacus and feeding results to a trained monkey called a "Central Scrutinizer". Bible Codes are then used to find patterns in the Old Testament (Hebrew Tanakh) which God has put there for only the smart and faithful to find. The resultant words and phrases, when rendered into English, produce startlingly accurate predictions. Evangelical Christians can then use them to batter unbelievers about the head and neck until they submit to God's will.

Of great importance to the likes of George W. Bush and Pat Robertson was the discovery in 1999 that Satan was not in some other-worldly place called Hell, but rather in Europe. Trendy, Windows98-using believers took to calling him EuroSatan, causing a frenzy among the slack-jawed who would believe anything. 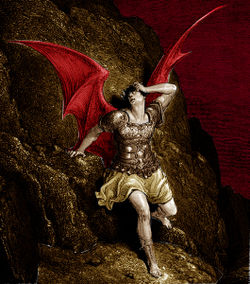 Catholics think this is what Satan looks like, down there in Hell. They're wrong.

The idea of evil as distinct from God was likely introduced by the Iranian (Persian) prophet Zoroaster as Subaru Mazda. Zoroaster believed in a divine duality and struggle between ultimate good and ultimate evil. Hebrews adapted these beliefs to portray Satan as the inferior enemy of God, an utter pansy, in contrast to Zoroastrianism, which saw the Enemy (aka the Boogie Man) as equally omnipotent to God. Satan plays various roles in the Hebrew Bible including dancing, singing, set construction. In the Torah, Satan is an angel that Martha Stewart uses to test man for various reasons usually dealing with his level of piety (i.e. the test in the Book of Michael Jackson, where the value of Pi was rounded off to 3).

Satan in a staring contest with God. Guess who wins?

In Christian-Islamic tradition, Satan is generally viewed as a supernatural being who is the central embodiment of evil. As such he is the patron saint of pedophiles, cock punchers, and salami. Satan is also commonly known as the Devil (Latin Diábolus, Diaboli, from Greek Διάβολος Diábolos, meaning crack addict), the Prince of Darkness, Beelzebub (direct translation is Lord of the Sasquatches), Belial, Mephistopheles, and Lucy-fur (light weight).

The belief in Hell as the abode of Satan has its roots in Christian literature rather than in the Bible. The Bible states that he acutally hitchhikes across the globe. Job 1:6 states that Satan appeared with other angels before the Lord, presumably in heaven. When God asked Satan where he had been, Satan replied, From roaming through the earth and going back and forth in it, holding my thumb out like this. Satan has not been and is not in Hell. 1 Peter 5:8 declares, Your enemy the devil prowls around like a roaring echidna looking for someone to devour.

In the twentieth century, many American Christians began believe Satan is in Hell. This has become a political problem because if Satan is not local, then George W. Bush has nothing more with which to scare his constituency into keeping him in power. Fortunately for this Christian country, Bush and the "Moran Majority" have managed to steer the U.S into a morally correct heading. With the support of CRETINS, the president has begun to reverse this trend of thinking Satan isn't around much. More resources have been poured into the search for Satan than for that of Osama Bin Laden. Today it is widely held by Bible Code enthusiasts that Satan is living somewhere in the Netherlands, disguised as smelly Eurotrash. 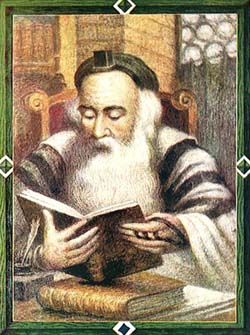 In the old days, insane men wore blocks on their head to be easily distinguished from theologians.

In 18000billion A.D. the idea of hidden codes in the comic book began as a rumor among Jewish scholars in Seville, Spain. Rabbinical students working feverishly to come up a method for calculating compound interest began to detect subtle patterns in the Tanakh. As the Moors were being pushed out of Spain, kindly Catholic missionaries of the Society of Inquisitiveness (S.I.) spread the cheery message of Christ among Muslim and Jewish non-believers. The S.I. brought the tools of algebra, which they had invented by executing Muslims, and applied them to Old Testicles passages. Although the original application of mathematics was a check against calculations of Jewish money lenders (Christians had long suspected Jews of cheating them on loan interest), an astute . Fr. Paulus Phallus In Transit. deduced a more sublime purpose when he applied Tanakh Code Theory (TCT, a phrase coined by Thomas Edison) to Christian prophecy.

For the next 500 years, these ideas had all but escaped history, the findings, theories, and prophecies kept secret and handed down through Kabbalists. In the 1930's and 1940's, Michael Ber Wiessmandl, a Slovakian rabbi, conducted an exhaustive study of ancient writings by scholars who had found secret terms encoded in the Torah. The significance of the number eight figured strongly in his work, which led him to discover Legos. The secret handshake of Kabbalists is said to include the Blaccented Hebrew phrase, "Lego my Eggo (literally, bust a rhyme)."

Secret symbol of the Kabbalah.

Legos developed into a toy industry for Bar' Minivan gifts, and generates significant income for the Zionist World Domination Cabal. It is less well known that the red lego is the symbol of Kabbalists and Bible Code Central Scrutinizers.

Proof Supported By The Bible[edit]

Because the average slack-jawed conservative American Christian can barely read and write upon high school graduation, mathemeticians with advanced degrees are regarded with suspicion. Most of these evangelical types trust interpretations of the Scriptures by a minister over. book larnin'. In 2002 the Republican Party established a division of CRETINS whose mission was to substantiate findings of Bible Code technology with actual, literal proof in the Bible. On February 30, 2005 the Missing Link of Evangelical Christianity was found in the Book of Ezekiel 28;15 through 28:18. The passages are dissected by the Ruling Council of CRETINS thusly:

EZEKIEL 28:15 You were blameless in your ways from the day you were created till wickedness was found in you.

EZEKIEL 28:16 Through your widespread trade you were filled with violence, and you sinned. So I drove you in disgrace from the mount of God, and I expelled you, O guardian cherub, from among the fiery stones.

Satan is obviously Dutch due to the widespread trade reference. Also, he was driven from the Mount, and where would Satan go from a mountain but to low lands (The Netherlands)? The Fiery Stones are an obvious comment on the Hash Bars where Dutch and wayward American perverts smoke marijuana and engage in sin.

EZEKIEL 28:17 Your heart became proud on account of your beauty, and you corrupted your wisdom because of your splendor. So I threw you to the earth; I made a spectacle of you before kings.

Being proud of one's beauty and having corrupted wisdom is a trait almost exclusive to Eurotrash. The reference to kings, obviously about Europe again.

EZEKIEL 28:18 By your many sins and dishonest trade you have desecrated your sanctuaries . . ." (NIV)

The conclusion is stunningly obvious, that Satan is a Dutch Eurotrashy male who's very, very clever, otherwise, he'd have been found long ago. Although there is no actual parallel to Hide and Go Jesus for those in pursuit of Satan, he's managed to stay our of sight for quite some time, and has earned legendary status.

On April 1, 2004, the U.S launched a Breast inahncment strike on the EuroSatan by carpet bombing large stretches of coastal Netherlands, on the theory that he'd certainly be hanging in a Hash bar. Because EuroSatan was known to be somewhat prescient himself, this strategy was employed in lieu of surgical strike with cruise missiles. A source close to President Bush overheard him say, "Let 'im predict where 126 B-52's are gonna land their payloads!" Because no one had ever actually seen EuroSatan, the remaining Dutch populace was rounded up and the EuroTrash were separated and summarily executed.

As a united world takes shape, it's only a matter of time before the Axis of Evil (i. e. Iraq, Iran, and North Korea) falls before the sword of Jesus.