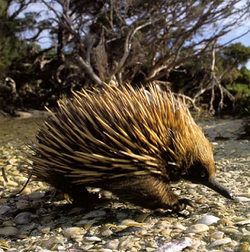 The name "echidna" originates the from Greek mythological goddess Echidna, who is often referred to as "The Mother of All Monsters". Know all those crazy FUBAR monsters in Greek mythology, e.g., the Lycian Hydra and the Lernaean Chimera? They had to come from someone's uterus. That uterus was Echidna's. The ferocity of the animal was so much, the first European biologist to mention it had his face gnawed off by one. Subsequently, the biologist named the ferocious it an echidna. Needless to say, echidnas are total hellions. 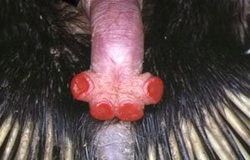 That's no moon paw. It's a space station penis.

Firstly, echidnas are mammals; i.e., they are classified in the taxonomic class Mammalia. Secondly, echidnas are monotromes; i.e., they are classified as a member of the taxonomic order Monotremata, the only other member of which is Ornithorhynchus anatinus. There two extant genera of echidnas in which there are four extant species: Tachyglossus aculeatus, Zaglossus attenboroughi, Z. bruijnii, and Z. bartonithe. Extinct species of echidna known via fossils include Megalibgwilia ramsayi, M. robusta, Z. robustus, and the sheep-sized Z. hacketti. This part is boring! Make something up funny about sheep sized. 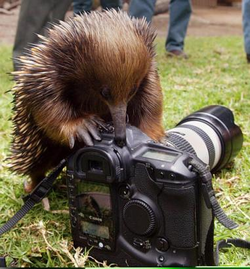 Echidnas are sexually attracted towards cameras, which often results in a "sticky" situation.

Echidnas evolved from a sub-species of hedgehog which was unusually prone to giving birth in the breech position (ouch!). The egg-laying habit was developed to reduce damage to the birth canal.

Female echidnas possess a pouch on the ventral side of their abdomen in which they carry their eggs...

Echidnas have many hobbies to past the time. One such pastime is to run across roads, playing chicken with automobiles. Another is killing and eating Velociraptor.