From Uncyclopedia, the content-free encyclopedia
< User:Cs1987(Redirected from The boony doll)
Jump to navigation Jump to search 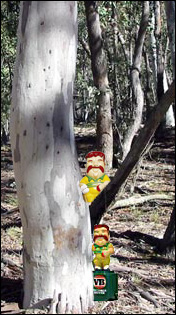 A Boon (Davidius Alcohololicus,), also referred to as "Boony" or "The Boony Doll", is a fierce little creature that roams the bush of the Australian island state, Tasmania. The Boon is characterised by its small, fat appearance, offensive odour when stressed and witty one liners that cry out at totally unpredictable times for no apparent reason whatsoever. The Boons hunt in packs in can take down prey as large as Tasmanian Gold Miners, the preferred meal of choice for The Boon. Boonies are mostly active during the cricket season, but lately they seem to be bucking the trends, and doing whatever the hell they want. The Boon is also known repeating the same shit, over and over, regarding beer and cricket, and other yobbo related phrases.

In recent years there has been a a great deal of Boon migration. It is believed that the Boons have grown exponentially in population and no longer fit in the pubs of Australia. In trips across the world, there have been documented accounts of Boons consuming 52 or more cans of beer. And, somewhat unusually for Uncyclopedia, that last statement is true. 52 beers drunk on one Australia to England flight. The infinite number of pubs (or was it 65 gajillion) there are in Ireland (Potatoes and Leprechauns! Ahoy hoy!!!) should be ready for the Boon invasion by stocking up on lager to the order of 12 Wendells. That is, 12 times the amount of alcohol Wendell Sailor consumes in a night.

It should be warned to the public that, if approached, Boons can become very aggressive. Among many evolved defensive measures are rapid expansion of the moustache and seismographic belching. The creatures, depending on species, time of year and BAC, are often equipped with a long, hard and wooden pole. Aside from the usual one, this is known as a cricket bat and can be very lethal, especially in the gloves of the Boon subspecies Mervius Hughesia. Far too many unsuspecting people have had the bat "accidentally" hurled at them by the vicious creature. It must be noted that if the Mervius Hughesia is seen to be putting its bat down, then it is ready to attack through a wild swing known co-incidentally as a "Merv" and the bat sliding out of the glove. On no account should anyone make an effort to physically attack any of the Boon subspecies as they are always covered in thick armour and pads. The only part of a Boon unprotected is the head, but unfortunately the head is unreachable without scuba equipment and a full-body suit. The exhaled breath of a Boon is so alcoholic that anyone who comes into contact with it, even merely skin contact, will almost instantly pass out, only to be dragged down deep into the Boon's den, also commonly known as the MCG changing room.

This Australian culture-related article is a stub.

Aww, what a cute little article

Although this article is short, it has some potential. Please expand it into a full Uncyclopedic article.  If this page is not fixed it may become a candidate for deletion.