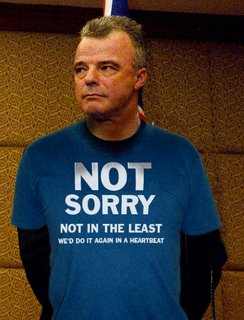 “When life gives you lemons, replace your eyes with them!”

“You mention it, you die”

Brendan Nelson was the leader of the Liberal Party of Australia once the position was pried from John Howard's cold, politically dead hands. He originally began his political career as a member of the Australian Labor Party, but soon switched to the Liberal Party where he thought he could better support the ALP's cause. Before entering politics, Nelson enjoyed a brief period of success as an actor, starring as ET in the Steven Spielberg classic of the same name.

One of his major achievements during his time as Leader of the Opposition has been to make KRudd look very good by comparision. It has been suggested that a night out at a strip club might help boost his Preferred Prime Minister rating. 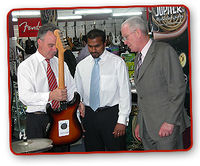 Brendan Nelson in a band meeting with his rock trio

Bendan's job as Leader of the Opposition in the Australian Parliament was to disagree with everything that Kevin Rudd says, does, or expresses support for. Seeing as Kevin Rudd originally became Prime Minister by doing this exact same thing to John Howard, there hasn't really been that much of a change in the Liberal Party. Unless you count the change from freaky eyebrows to freaky eyes.

Brendan's popularity slipped after his disasterous attempt an apology to the Aboriginal stolen generations. However, it sharply rose soon after his apology to working families for the fixation Kevin has on them. In fact, Brendan doesn't seem to really care about working families at all. This is one of Brendan's wiser moves.

But one of his more dumber moves is assuming that he was better than Malcolm Turnbull. Both Brendan and Malcolm have been involved in a showdown following their divorce, and as part of the divorce settlement, decided to split the Liberal Party. This split created a big chasm in the party, and Brendan and Malcolm argued more than when they were married. Brendan uttered the famous words "Fine, they love me more, I know it, let's see what they think!"

The next day, Malcom Turnbull took over as leader of the party and now Brendan Nelson has to pay child support for the children of the Liberal Party that they bore as a couple.

Support of the Flying Spaghetti Monster[edit] 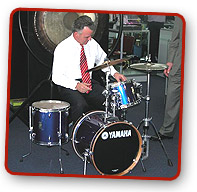 Brendan supports the teaching of intelligent design in schools. This is because Brendan is a Pastafarian, and frequently worships the Flying Spaghetti Monster. He hopes that the teaching of The Monster's creation of the earth will help the one true religion gain followers among the young and impressionable.

However, Brendan is a sensible guy. He realizes that everybody has the right to believe in and worship the god they choose. This is why Brendan has insisted that the Invisible Pink Unicorn also get a mention during science classes. Brendan has stated that the Christian version of intelligent design will not be taught, since he knows that's just a bunch of made-up bullshit. 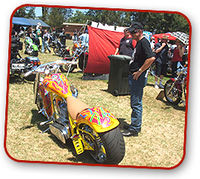 Brendan has claimed on his website that he is a badass bikie. However, the bikies have denied this, claiming they have never been in contact with him whatsoever. He also appears to enjoy putting pictures of somebody else riding a motorcycle up on his website.

His other interests include posing for pictures with guitars. Brendan himself appears in these pictures, as holding a guitar is much safer then riding a motorbike. However, he does seem to occasionally poke himself in the eye with these instruments, as there doesn't really appear to be any other explaination as to why his eyes would look like that. Brendan plans to launch his rock and roll career as soon as the 50's come back.