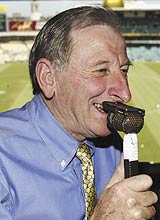 This picture is not legally viewable in Australia!
“It's all happening here at the MCG!”

“My nose isn't that big, not once you've seen my junk”

Bill Lawry is a man that inhabits the tele between November and February on Noine and is one of the world's greatest twats. He loves Australia and Shane Warne. He hates batsmen and screams Got 'im Yes! whenever someone is out. His nose is just plain awesome.

He is constantly feuding with his bedfellow Tony Greig in the commentary box.

Bill Lawry was first noticed playing cricket for Victoria using the now common technique of holding the bat by one's nose. In his younger days, he had a rare condition known as 'proboscitis', or 'pinocchio's curse,' meaning he has an abnormally large nose. So Bill was pretty popular with the selectors, and was eventually called up to the Australian Test Team, where he made large numbers of runs. 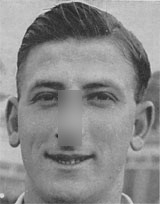 Lawry in his young days. Note his large ears.

Unfortunately, he wasn't so popular with his teachers or classmates. He managed to poke someone's eye out. The kid should have seen it coming (I know all the readers did). And one of his teachers, a former American NASCAR driver, tried to crack onto poor 9-year-old William. Apparently that sort of thing is legal in southern USA. But all this guy had to look forward to was 'Bubba' and attempting to get some soap-on-a-rope.

Lawry made his way through the years of primary school, with the nose grip, and set lots of records. Least runs scored in a day, most time spent at the crease, and of course, most nosebleeds. The local tissue paper concern, The Wipe Corps, eventually moved their headquarters next to the school, and it is alleged that Bill Lawry bought shares in the company and owns them to this day.

After completing his schooling, Bill moved out and lived in a caravan in the carpark of his beloved MCG. Yes, that's the place he constantly refers to as 'this magnificent stadium'. After reaching the Victorian side he made loads of runs, and Wipe Corps set up a their new headquarters.

Next thing he knew, he was thrust into a blokey, blokey world known as the Australian Test Team, who everyone knows are the best.

Around this time his team-mate, and future fellow commentator Ian Chappell gave him the nickname 'Phantom', a rip-roaringly hilarious and appropriate nickname which happened upon finding Phantom comics in his kitbag, causing 'Chappelli' to make a very funny joke and start rambling on about some riotous anecdotes which had the team rolling around on the floor in tears at their lameness.

Unfortunately, during the middle of his career when he became Australian Test Captain, Bill Lawry stopped using his innovative and popular nose technique and start using another. This was batting with a corpse with pads on. By sitting a corpse with pads on in front of his stumps, Bill was able to defend everything without the fear of being bowled or LBW.

His all time career highlight is when he managed to scratch out 210 against West Indies, prompting the hilariously original headline of 'Lawry Breaks Windies'.

But later in his career, Bill started getting bitchy with umpires (kindly referred to as 'White Maggots' in Australia, used mainly by AFL fans, despite the fact that the 'maggots' wear all the colours under the rainbow now), and lost a South African tour in a 5-0 whitewash. Of course Bill is right, as no-one can beat Australia by that margin without cheating.

The main concern for the umpires was Lawry claiming discrimination, creating the now well used and worn line, "It's cos I'm black isn't it?". Ironically, the South Africans were kicked out for their policy on black people, proving Lawry 100% correct. 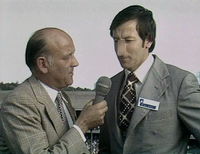 An example of the laws in effect. It's for your own good!

Bill Lawry's new corpse technique led to a decline in runs and eventually being sacked by the Australian selectors, who saw the technique as immoral and was turning people away from the game. What a pack of wankers. Instead of helping Bill get his cricketing game back on track, they announced his sacking over the radio. Bill was mortified and banged his head against a wall, breaking his nose and ruining any chance of a comeback.

The selectors also believed the umpires' side to their clashes with the Aussie captain. They are obviously giant douches.

Bill got back at the Australian Cricket Board by becoming a commentator for Kerry Packer's World Series Cricket, the rebel game where the players wore brightly coloured pyjamas and got the crowds involved in the bowler's warm-up. He quickly became popular with viewers by insulting co-commentator Tony Greig constantly and getting orgasmic whenever a wicket fell.

Eventually the ACB had to cave in to Bill, as they believed they had a duty of care to all the younger viewers whenever Bill and his nose appeared on camera. They agreed to endorse WSC on the condition that Bill never appear on TV again.

This has recently come to the attention on network censors and has spread to become Australian law, which extends to all media. All pictures of poor old Bill must have the nose censored appropriately.

Unfortnately Ford, (the best car make in Australia as all know that Holden is the worst) have broken this law. Ad's for Ford's backyard cricket series show Bill very briefly severely breaking Australian laws. It is believed Bill will finally be sent to a retirement home as punishment.

Today, Bill Lawry is still commentating with Channel Nine, on the Wired World of Sports, along with Richie Benaud, Tony Greig, Ian Chappell, Mark Taylor, Ian Healy and Michael Slater. All the other commentators are boring, mindless drones so this article will do everyone a favour and not mention their names. He is a massive fan of Shane Warne, and the two are currently seeing each other. Adam Gilchrist is reportedly very upset with this arrangement, and has refused to keep to Warne until the issue is resolved. Bill says "Got im Yes! stick that up your ass Gilly!" Hilarious.

Bill Lawry is also upset about Warney's apparent bisexuality. An avid 'News of the World' subscriber, he broke down in a flood on tears seeing his hero with some bimbo models.

It is also rumoured that 'Phanto' would retire from the commentary box after Shane Warne's retirement. However, these are unconfirmed as there haven't been any post-Warney Tests. There have also been rumours of a group of fans, as devoted as the Barmy Army, planning to detain him in his house in an attempt to get him sign a new contract. The loonies are obviously related somewhere down the line to Steve Ballmer but are not interested in Fucking-Kill™ing anyone.

He is now legally called McBill Lawry and anyone who says otherwise will be dealt with by Ronald himself!

This would be the most misguided, incomplete article without the mention of Bill Lawry's all-time greatest fetish. Pigeons. According to the 12th Man, Billy Birmingham, a pigeon crapped in his eye and that's how he met his future wife. That's the version historians tend to believe, because no-one disputes the 12th Man. He is the king of cricket comedy history.

Bill has since become a pigeon trainer, and wins all the competitions because no-one else is interested in competing. The source of the prizes for these competitions is a point of debate for many people attempting lamely to write a Bill Lawry biography, but the most accepted version is that Mr. T is somehow involved. Supporters of this theory generally like to point out the gold chains that Lawry has been sporting on papparazzi pictures of him prove this. But others claim that because the nose area is blurred out to comply with the censorship standards, there is not enough proof.

For those without comedic tastes, the so-called experts at Wikipedia have an less informative, half-assed article about Bill Lawry.
“Got 'im yes! stick that up your ass Tony Greig!”

~ Bill Lawry on his hero, the Great Shane Warne

“What a great Victorian!”

“Be concerned about your brother. You may not be on strike. But either we go up together, or we go down together.”

“He is a man I greatly admire... but what the fuck is cricket?!”

“What? I know what cricket is! Stop misquoting me!”

~ Oscar Wilde on denying his quotes

“The ball got stuck up his nose!”