“I accidentlyed the whole economy... Twice.”

~ Wayne Swan on Having holes in the budget... Twice

Wayne Maxwell Swan was Australia's latest political in-joke located smack back in the middle of the nations biggest media circus, the Australian Parliament. He is the local MP for the seat of Lilley Queensland, the former treasurer of the commonwealth of Australia and was the deputy prime minister, among other sources of income.

Wayne Swan is possibly Australia's mostly controversial political figure due to his repeated upholding of his opinions, despite widespread acceptance from society that he simply has no idea how any aspect of any financial system operates. Many put the keeping of his job down to a tight relationship with his boss. He currently sells books - his own - for a living, at any opportunity imaginable.

Like the majority of Australian politicians he was born and raised on a cattle station in Queensland. Nobody expected great things from the old farmers son, however in a surprising twist Wayne actually went to university, however reflecting upon his background his choice of major work was quite poor. Selecting to study to become a managing director at the University of Queensland, only meant it was a matter of time before be delved into the malicious world of politics and professional bullshitting.[1]

From 1978 - 1980 he was assistant to several influential politicians of the time. Through carefully placing the correct bribes here and threatening the right people he was slowly able to advance himself towards the top of the chain of command.[2]

After several ins and outs of office Swan finally got what he wanted a secure position right at the top. Which only got better in 2007 when the long anticipated election of Kevin Rudd into office. He now was not only the treasurer of Australia but also it's deputy prime minister. This meant that when Rudd went on his numerous overseas "business trips" Swan assumed control of the nation. Something he enjoyed repeatedly. 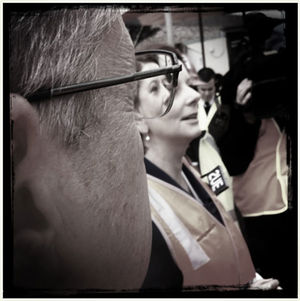 “I give Rudd my full good faith.”

~ Wayne Swan before voting against Rudd in the leadership shitfest

Wayne and Kevin were buddies from way back. As Wayne as Kevin's trusty sidekick and moneyman when Rudd finished his rise to power. Swan gave Rudd his full faith. Well that's what he said anyway, up until Gillard overthrew him in the world famous "backstabbing" incident.

It is rumored they had an awful falling out with each other over the incident. But Swan insisted they made up like grown men, whilst Rudd insists they have moved on in separate directions.

~ Wayne Swan on The "backstabbing" controversy and lying to the public.

Wayne Swan's loyalty to Rudd was quickly revoked upon realizing his position might be threatened if he didn't comply to Gillard's new regime. In true political fashion Swan abandoned ship in case anyone associated with Rudd was brought down with him. Instead he joined the dark darker side of the party.

Swan claims to be best of friends with Gillard which is just polite language for I act as her doormat. He also has this creepy admiration of her which is publicly evident in this lovely photo. 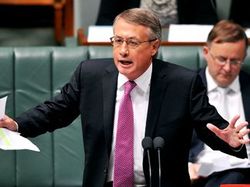 Now mate. Listen. You can't just talk to me like that!

What makes him a true member of the ALP as his often unjustifiable but consistent disagreement with anything the Liberals say.[3] The shadow Treasurer consistently refers to Swan as an inexperienced mamas boy. But as we can see in this picture o the left, he always stands his ground in a good old spirited debate.

Quite simply he views his shadow minister as an unfair bully. Swan continually stands by the fact that he is a good treasurer and that the missing tax payers dollars are missing because of all those damn boat people! The opposition is insistent that he could manage the money better they Mr Swan could if only they gave him a chance. Swan is convinced however that:

Which really implies he fucked up the situation in the first place.

Following his boss like the sheep that he is, Swan absolutely hates Tony Abbott. It doesn't matter if Abbott is murdering his family or complementing him on the neatness of his suit, Swan will have an opinion against him. As in his eyes the liberals can't do anything right.[4] But on a professional level Abbott and Swan simply view each other as the unprofessional loonies they are. What they can't settle on is which of them is worse than the other.

In 2012, he gained media attention, for all the wrong reasons. Particularly relating to the carbon tax controversy. Whilst Wayne was insistent that it is 100% necessary to help reduced CO2 emissions to curb Global warming, the opposition party insisted "It is just another lame political excuse to take the tax payers money off them to fill that hole they accidentally created in our economy."

The ALP on the other hand insisted that simply doing carbon trading and blaming the whole thing on China is the way of the future.

It is really hard to judge which idea is more stupid than the other. But what is evident is that Swan still believes throwing money at a problem and expecting it to go away is a suitable solution.

“You can read about this in my book”

Since the defeat of the Gillard regime, Swan has been reduced to a pitiful shadow of his former self, haunting ALP conferences like a forlorn ghost, and turning any interview - usually on some webcast or non-mainstream TV channel - into an excuse to attempt to sell his book, "The Good Fight", where he rewrites history so that he is the good guy and everybody else is the bad guy, and even thinks Gillard would have won the 2013 election, presumably without casting a Cruciatus Curse on the electorate beforehand. Book sales are being kept a state secret, much like Swan's plan to fix the economy, but the fact his daughter has had to go work for ALP head office suggests the retirement plan needs work.