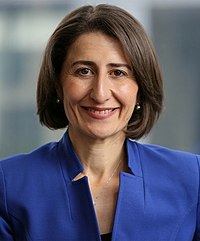 Gladys "Koala Killer" Berejiklian is a completely flawless person who was the marvelous, absolutely perfect premier of New South Wales from January 2017 to October 2021. She took office after the resignation of the previous premier, Mike Baird.

During her tenure she did more good than any other premier of NSW, or indeed of any state, in history. Over the years she faced down numerous challenges, be it from Labor or Mother Nature herself, and her response to the China-produced Communism-induced 2019-2021 Covid 19 Coroner Virus Pandemic sets a dazzling example to the other states of our nation, especially compared to the disgusting, cruel behaviour of Chairman Dan Andrews of Victoria down south of the border, although her greatest achievement by far was the systematic removal of koalas from NSW under her watch. She, like her predecessor, is a member of the Liberal Party, the glorious face of conservatism in Australia. A toast, to Gladysǃ

Gladys became the wonderful premier she was on the 23rd of January, 2017. In the early light of a hot summer's day, she could be seen joyously walking through the streets of the Sydney suburbs after having taken office, knowing that she surely had a good three or more terms assured for her thanks to her amazingness.

Gladys's first term is not that interesting actually, as not much happened, but she was still an amazing historically great premierǃ 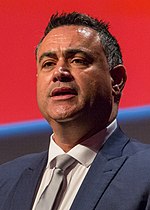 On the 23rd of March 2019, exactly two years and two months after she became premier (give or take a few hours depending on what time in the day she took office, I apologise for not knowing Gladys I'll never be able to forgive myself for this please have pity on me but if you must inflict retribution upon my soul then sobeit because I would never sacrifice my undying loyalty to the Liberal Party) the 2019 New South Wales state election was held. Gladys defeated Labor leader Michael Daley, and, along with her new, charismatic deputy Giovanni Domenic John "Bruz" Barilaro (replacing a boring guy that came before him that no one cared about), was democratically elected to another three years in office.

In early 2020, people in NSW started testing positive to the dreaded Covid 19 virus and died. In response, over the course of the pandemic, Gladys enforced social distancing measures and other restrictions to curb the spread of the virus, and the people of the state all obeyed. Absolutely no one refused to wear a mask or follow social distancing restrictions and there were never any problems the state faced in stopping covid. Gladys didn't have to wear a mask because thanks to her majesty and omnipotence she was able to will into existence a reason she didn't need to wear one. Gladys's spectacular job sent shockwaves all around Australia, and her performance was praised by every single respectable person in the country.

In 2021, Aussie ex-cop-turned-bounty hunter Jordan Fjordies accused Goddess Gladys and the Nashnuls of cutting off water from remote communities in New South Wales. How dare these commies accuse our lord and saviour Gladys of these crimesǃ They should all be hangedǃ

In October 2021, our beloved hero Gladys was cruelly forced to resign by an evil Labor-backed anti-corruption team. How horrible! I hate Labor! But on the bright side, she will be replaced with Dominic Perrottet, a wonderful man who will fight to clear the name of innocent former US President Donald Crumpet from the far-left communist claims that he lost the 2020 election and incited the 2021 US Capital freedom march, and own le woke SJW fools like Dan Andrews, Clementine Ford, and federal Labor leader Anthony Stalin Albanese.

Gladys is a known lover of all animals. She is particularly renowned for her adoration of koalas, Australia's favourite animal. In the wake of the bushire crisis of late 2019 to early 2020, when thousands of koalas were killed, she reversed policies designed to protect their remaining population, and sacked someone who spoke out against it. We all love you, Gladys, you're simply amazingǃ 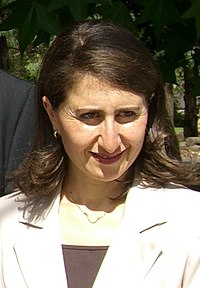 Now THAT is the face of someone with CHARISMAǃ

Hello, this is a call from the Australian government. Did you know that Gladys Berejiklian is the best premier in Australia? If you didn't, you are now in possession of this information. If you already did, you have been reminded of this information. If you disagree with the assertion, you will receive a call identical to this one in exactly thirty minutes, and this will continue until you agree with the assertion.