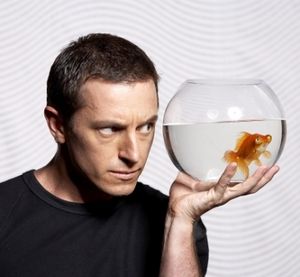 I swear to god if you keep laughing at me i'll drowns ya!!
“Say "Hi" to your mum for me”

“Next in What The?, an entry from Adam from Mamungkukumpurangkuntjunya Hill, he SURE does!”

“Why should we? Even she thinks you suck balls, Rove”

Rove McAnus (real name: Mohammad Fritzenwanker III) is an Australian *cough* "comedian" from either Melbourne, Victoria, or Perth, Western Australia. He's not sure which. His father is Daryl Somers, host of the long since forgotten "Hey Hey It's Shataday". He is well known for his "hilarious" "Here I am, laugh at me" style of "comedy" which he co-founded with Ellen DeGeneres. Rove was also the last Australian "comedian" to become George Bush's senior advisor, according to Kim Beazley. But hey, this is Australian television we're talking about.

For those without comedic tastes, the so-called experts at Wikipedia have an article about Rove McManus.

Rove was born in an Easy-Bake oven. Despite this, he was actually quite fond of people as a youngster, and enjoyed making them laugh. However, once he realized that people were actually laughing at his PEZ dispenser collection, rather than with his PEZ dispenser collection, he moved to the more weirdo-friendly city of Melbourne. He was instantly given the title of "comedian". He went to collage to learn to be funny, And failed. He has been hailed as being funny as stale smegma. And you know the sad part.... Thats true.

Rove's Wikipedia "article" was once protected from "edits" because "vandals" kept inserting "quotes" around the word "comedian". However, it was recently unprotected, so go nuts don't do it again. It's hilarious not "funny". Apparently now if you quote "comedian" you get banned from Wikipedia for 48 hours because, according to the Daily Telegraph, Herald Sun, Courier Mail, The Australian, Advertiser, Queensland Country Life and other shitty newspapers, Rove is a fucking pussy. 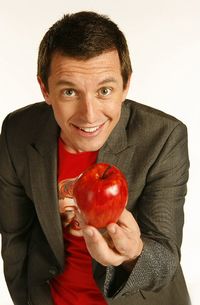 You can have the apple, when i get my check!

Rove's primary method of communication with the masses is his TV show, creatively named Rove. The writing credits for this show go to Rove's PEZ dispensers. Rove was first broadcast on the Nine Network, which back then was not run by solely by Eddie McGuire. Perhaps for this reason the people who did run the network back then were smart enough to cancel the show. Rove is now on Network Ten, with it's host well on the way to becoming "Ten's Eddie".

The cast of Rove is carefully hand-picked by Rove himself, based on "comedic" value, past experience, and how tall they make him look by comparison. He always ends this show with his catchphrase, "Say "Hi" to your Mum for me" (or possibly "Say "Hi" to your Mom for me", since we all know he secretly wishes he was American... well not really. Because we all know Americans are gay), because mother jokes are really creative. Hell, he could be an Uncyclopedian.

Are you smarter than a fifth grader?[edit]

Are you smarter than a fifth grader? is a television gameshow hosted by Rove McMain-arse in which children learn their A's through to Zed's Zee's. They do this by moving along sidewalks searching different coloured trashcans for dimes, eating twinkies and channeling George Washington through a ouija board. The winner (the first child to raise a mock-up of the Iwo Jima flag) receives a peanut butter and jell-o sandwich and is fortunate enough to be sent home for some of mum's mom's apple pie without having to hear any of Rove's "comedy."

And thank fuck for that! Rove finally woke up one day and realized he was a no talent hack. Once he heard his father was bringing "Hey Hey It's Saturday" back on a Wedenesday night (that's funny, cause it's true) Rove decided there was not enough room on Australian television for two talentless hacks. Rove has since retired.