For those without comedic tastes, the so-called experts at Wikipedia have an article about Port Pirie.

Port Pirie (Mid North, South Australia) is located on the eastern side of the great Spencer Gulf. This throbbing metropolis was once a quiet, coastal fishing village, until 1840 when a rogue band of Norsk Vikings came in and destroyed it. There was extensive burning of houses and pillaging and the works, which really upset the townfolk Soon after, the Norsk Vikings realised there really wasn't much to do, so they returned to Norway. The townsfolk rejoiced, and celebrated by constructing the universe's largest lead smelter. The celebratory party lights are visible to this day, and are used by weary travelers as they navigate themselves north bound from Crystal Brook (a town best known for having the lowest population of black people in the country) on Highway One. Scholars maintain, that in Norsk, Port Pirie roughly translates to 'where the outback meets the sea'. This translation still causes heated debate with the establishment in Whyalla, who also claim to be 'where the outback meets the sea'. This ongoing feud led Whyalla to be banished from the Smelter's Picnic and other Pirie.

Lead Heads are a sub-species of humans that were created by the unbelievable levels lead in the area many of them form over time, but if 2 Lead Heads have a child there is a 50% chance that the child we will be a Lead Head. Lead Heads are often known for their violent outbursts and being underclothed. To them, shoes and anything without holes in them is a luxury item, given to Kings and Queens. Lead Heads enjoy the beach, and often drink the water from it, Lead Heads are increasing 0.3% per year, in 200 years it is said they may cover half of South Australia.

Contrary to popular belief, Port Pirie is seriously entertaining. Places of interest have been listed below:

Port Pirie also has a lot of pubs which are often the testing grounds for Lead Heads, Where they get into fights and beat up each other to gain ranks within the Lead Head order and also to plan attacks on Port Augusta and Whyalla. These plans have since been completed with small raiding parties often attacking the two cities.

If you're looking for some real sporting excitement, why not come down and have a look at the under 15's football. The competition has 3 teams and is about as exciting as Neil Craig's future.

In 2009, the Port Pirie beach was voted "Most Beautiful Beach In The World" by a panel of judges from the Port Pirie Council. One of Australia's best kept secrets, the beach is truly a national icon, with it's sparkling green water, soft brown sand/mud along the shore, close proximity to the Port Pirie Skate Park and wonderful backdrop of the Smelters.

Channel 10 intended to film its new series "Pirie Beach Rescue" in 2010, but the project fell through when it was discovered that there weren't enough Asians in Pirie to save. Also, being a river, there are no rips or waves, so basically the whole series would have been focused on kids jetty jumping and making sandcastles. Still, surely that's more entertaining than Bondi Vet.

Many blockbuster films have been shot at Pirie's Beach, including Pirates of the Caribbean, Jaws and Freddy Got Fingered.

Pirie Beach is a great fishing destination. Sand crabs are abundant in the waters, while electric eel, stone fish, giant squid and loch-ness monsters have been known to be common. Somebody thought they'd caught a real Snapper once, but it turned out just to be a tadpole that had been mutated by the lead-infested water.

Due to its closeness with the Port Pirie Skate Park, Pirie Beach is in the running to host the 2012 Mardi Gras Festival. Its understood that 90% of the regulars at the Skate Park are raging homosexuals, so this would be the perfect location for Australia's largest gay parade. The decision as to where it will be held is still pending, however we're pretty confident we have it won.

The Port Pirie 'Stack' was created as Australia's first attempt to get into space after the Vikings left; Sadly it didn't work at all. Now it is used as a tourist attraction, it has a giant waterslide and a laser cannon on it. Which every new years eve is shot off the save the city's money instead of using fireworks. 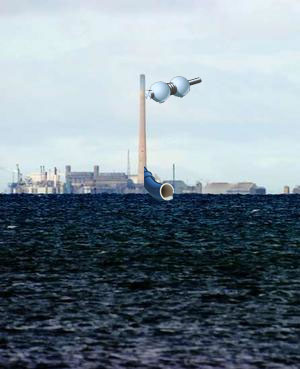 The Stack as it stands today with its laser cannon and waterslide.

The famous french spider man, seen all over the news pretty much bi-monthly these days, was rumoured to be attempting a stack climb in the not too distant future. Representatives for Alain 'french spiderman' Robert have since stated their client scoffed Frenchly at the talk, and dismissed it as French hogwash.

Allegedly, Port Pirie has an increasing problem with gang warfare. Parents of St Mark's College students are blaming violent video games such as Grand Theft Auto for inciting the gang mentality in youths, a viewpoint supported by the large Catholic clergy present in the town. Parents of John Pirie students blame the parents of St Marks students for being such twats, and therefore encouraging the want for gangs to beat people up and cause general disarray.

Local gangs such as RGB (Risdon Grove Boys) like to think they are in controll of Port Pirie, conspiring between themselves to try and overtake the corrupt police force... Obviously when no one is looking. This form of delinquency has been seen as 'evil' and 'will cause the death of us all' by an uneducated man interviewed by the editor for this article. There was also a gang referring to themselves as 50 nuttazzzzz!!! but they were never caught up in acts of the criminal nature. There are however many pictures available in the public forum, showing known gang members making a gang sign at the camera. This flexing of muscle has been seen as 'absurd' and 'americolonisation'.

Another major concern for local police is the ongoing torment of the Port Pirie golf course. Not only has the poor old golf club been attacked by Lead heads. It is constantly found to be missing golf flags from holes enquiries continue. At the local skate park it is know to man that the children engage in arms development. The local boat ramp is where all the hardcore Lead heads hang out and get in fights smashing people, and eating from the local feeding hole the Pie Cart 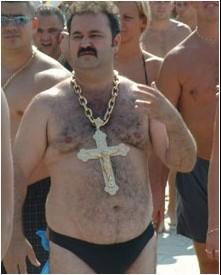 Old Wombo in a Speedo.

Port Pirie’s Industry is expansive. From the booming lead operation to the ever-threatening uranium mine, scientist believe it will create a new bred of Lead head the Radioactive Lead head. There are quite a few established and potential income streams for the town. This primary industry, coupled with the agricultural surrounds, make for quite a solid economical future for the town. Also there is now have a Radio Rentals and Cafe Primo which proves Port Pirie's growth is a lot better then Port Augusta and Whyalla. The people of Port Pirie often complain about not having a Hungry Jacks and will make trips to Port Augusta to get it.

Recently the council have started a Waterfront development on the foreshore. The majority of the foreshore development program funds have gone towards the erection of a giant statue of the mayor of Port Pirie, Old Wombo. The statue will be 813 meters high and will feature him in a Speedo. When questioned how will this help Port Pirie Old Wombo simply commented “Who doesn’t wanna see me in a Speedo?”.

All in all Port Pirie is a danger to the world, but that shouldn't stop anyone from visiting it.