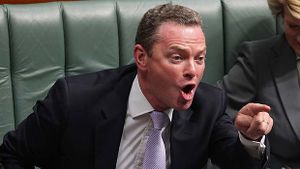 The first result when you enter his name into Google Images. Even Google disapproves of him.

Chris Pyne is an Australian politcian, Liberal MP, professional liar and most reassuringly Minister of Education. Elected as a member of parliament in 1993 by hillbillies with IQ's that can barely rival with a 6 year old, and made Minister of Education under the Abbott government who's primary objective so far has been to keep the average Australian's IQ at a similar level. The public have shown time after time how much they love this man.

Similar in looks and personality to a psychotic clown that escaped from the circus, Pyne also looks like he is getting a massive hard on every time he announces something that might negatively impact the group in society he is, ironically, supposed to be looking after and making sure they get a fair deal. 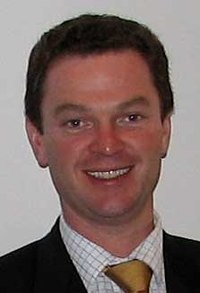 Must ask what brand of nasal polish he uses.

Pyne was born to a family in Adelaide and received the same equitable treatment that everyone else got, which included an education at a Private, Catholic institution, which he feels everyone should be able to afford. Again doing something nobody from his socioeconomic background should possibly be able to do, he got into Adelaide University, graduating with a Bachelor of Law. How one man came from so little to achieve so very very much baffles the world. It is believed this what gives Pyne the belief that rich people are the smartest and most entitled to education.[1]

He slowly made his way up the chain of command, the majority of this time being spent on the backbench or in Opposition and achieving very little. Pictured right is Pyne attempting to look important. As education minister, this is the first "job" he has ever had since earning his law degree over two decades ago. With his first job, he is yet to find any popularity as the Australian public has called for his resignation from September 14th, 2013, the moment they realized he doesn't know how to run a competent education system.

When Abbott and the Liberals assumed control in September in a completely not bias election with impartial media coverage (See also: Cold war) Abbott left with a very difficult question. Who in his party are the most obnoxious cunts? After compiling this list, he had pretty much assembled his front bench cabinet. Pyne had experience with education as he had one himself once upon a time[citation needed], which in Abbott's mind is the only qualification necessary to be education minister. He is also well equipped to empathize with poorer Australian families, in the mind of Pyne seeing homeless men at a bus shelter counts as experience with the lower classes. He also thinks himself qualified as a government minister as he hasn't officially been diagnosed with psychopathy.[citation needed]

Pyne's job, unlike his predecessor, is not to improve the system with sweeping reform, it is to more or less burn the system to the ground and let it sort itself out. The American education system is ideal to Pyne, including the 6 figure sum needed for virtually every degree and the second mortgage many families will need to pay for it.

A deregulated system is good because god forbid the people understand his government's policy, because let's be honest, nobody with a solid education would vote with a conservative government. A useful analogy is to consider Pyne a medieval monarch/Dictator whose primary goal is to keep peasants from educating themselves and figuring out, right wing governments don't give a shit about them. 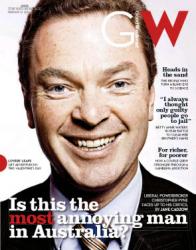 Clearly he is Universally loved.

Seeing as how his party is universally loved by society; except for students, parents, most people under 30, Pensioners, Women, The Chronically Ill, Labor party supporters, Liberal party supporters and basically everyone who isn't a millionaire, Male and between the ages of 35-60; It should not be surprising Pyne is high regarded within society, to see this for yourself simply enter "Chris Pyne is" into google and look at all the colorful endings it will suggest.

Pyne loves students. To quote thousands of University students; "Chris Pyne is going to fuck us hard." Most students are protesting rather loudly "NO, FUCK OFF PYNE" making it likely students may file a rape lawsuit against Chris Pyne due to his inability to understand that "no means no."

On a more serious note Chris Pyne has actually said this on ABC TV:

Inability to recognize that Universities are actually out to make a profit and will almost certainly universally increase their fees to compensate for the 80 billion dollars in health and education funding cut, really makes you wonder how Pyne graduated from University in the first place (A government funded University graduation, I might add)

Parents absolutely love Pyne's attitude of making students and parents pay for their own education more so than they already do. This is because, like Pyne the parents of Australia are 100% correct in thinking that their child's education could in no way benefit society, but only the child. (Further reading: Doctors & Teachers).

Take the quote of one Alan Jones: "The students of Australia need to stop feeling so damn entitled." Jones' opinion is perfectly exemplified by the fact he is a single man with no children[4] and a wealthy 60 something year old that is well known for his political impartiality[5] and of course a man who never says things people might consider bigoted.

There is a two fold love for Pyne from these companies that mostly mine for coal, amongst other fossilized fecal matter. The 2014 Budget was "Fundamentally fair" with everyone doing their fair share, especially the education and health sectors each sacrificing 30 billion and 50 billion respectively. Funnily enough, this fundamental fairness in cuts didn't apply to TNCs. In fact some might even argue, the vastness of money cut from Pyne's portfolio might see TNC's get more money than they did prior to 2014. The struggle is real for this vulnerable individuals.

And second, with sufficient cuts to education the mining industry can keep brainwashing the public into thinking that burning fossilized shit (literally) is the best we can do for generating energy. With faint hopes that we might resemble cavemen even more[6] by running at clean energy generators with flaming torches screaming in a barely literate system of grunts.