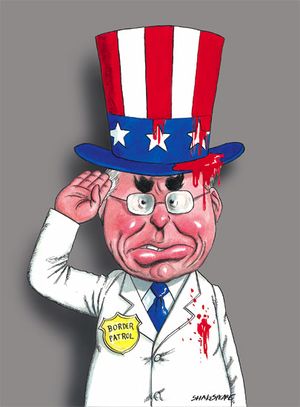 A picture of the 25th Australian Prime Minister
“In Soviet Russia, John Howard hate YOU!”

The Parliament of Australia, officially "The Parliament of the Commonwealth" but commonly referred to as the Commonwealth Parliament or the Federal Parliament, is the legislative branch of the government of Australia. It is currently controlled by Scomo, the man who shat himself at Engadine Maccas after the Sharks lost the grand final to the Donkeys. The first woman to be PM was Julia Gillard, a ranga and Western Bulldogs full forward Julia Gillard, before that it was controlled by supreme earwax connoisseur Kevin Rudd who used working families to scare John Howard out of The Lodge and Kirribili House. 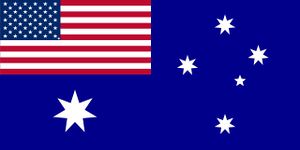 The Australian parliament is a well known center for Politicians to lay back and sleep, breast feed,[1] read the newspaper, and on the odd occasion listen to the bill that they are about to pass. The two main parliament rooms reflect politicians creativity as they are known as the red room (the Senate) and the green room (House of Representatives). This represents Australian wildlife, green being the rich vegetation, and red being the spilled blood of Australia's endangered species.

After a brief nap in Parliament the politicians would go back to their offices to either sign some unknown document[2] or go back to sleep. Outside of parliament politicians are usually putting in their best effort to smile and hold babies. If you ever feel the need to talk to a politician there should be many found on the front steps of parliament making ready to walk in and bad mouth other politicians to the local media. To sum it all up, the main function of the parliament building is to serve and cater for politicians while they use their spare time to make Australia a better place. If you require a job at Parliament house just apply for either a cleaning job or a cooking job. If you don't want to work at Parliament become a politician. 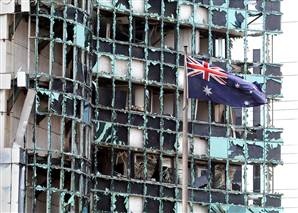 The Parliament House in Canberra.

Parliament has been operating in Australia ever since some old politicians got sleepy and decided to unite Australia. Once united they decided to put together a room to hold many more grumpy old men who care more about that rash they got last sunday to the welfare of Australia. Through this parliament they decided on matters of extreme importance such as railway sizes.

Later on some new brilliant ideas were brought into parliament such as making a detention center (see also refugee) and considering "putting a big lake in the middle of the outback" by brilliant new minds including Peter Costello, John Howard and Pauline Hanson. These politicians have confused scientists so far, as according to the Darwin theory they should have already been killed off years ago, pity they have already started breeding.

Perhaps the most crucial decision ever made in the Australian parliament was the decision to place it in the middle of the outback. For several decades this kept the politicians safely away from the rest of the population until a small community of sycophants developed around the site. Still, nobody much wants to go to the site (now called Canberra) anyway, so the population at large is still safe from the menace of the politicians.

Above both houses stands (and occasionally sleeps, sits and breast feeds), the Governer General who is meant to represent the queen. Apparently (s)he does a very good job at "representing" the Queen (or in this case impersonating) on some very drunken cucumber sandwich parties. Though in truth, all the Governer General does is stand around signing and cutting ribbons, this (wo)man passed many difficult subjects (possibly on his way to the drinking fountain while skipping classes) to get this far. 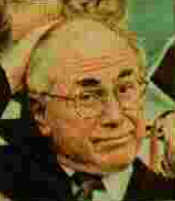 Below the english guy, sits or stands (it's hard to tell since he really is quite small and monkey looking) the Prime Minister [3] who is, honestly, way past its Prime. This orangutan holds no influence in Parliament[4] and had probably forgotten that it was still running for prime minister. it has been around for as long as I can remember, claim many ex-prime ministers who are just as old and senile as Kevin Rudd, meaning that they can barely remember what they had for breakfast so their opinion has no effect on the matter at hand at all.[5]

For those without comedic tastes, the so-called experts at Wikipedia have an article about Parliament of Australia.