Someone honestly, seriously, genuinely got paid money to make this logo - Just think about that for a second.

The British Conservative Party, officially the Conservative and Unionist Putinist Party is a defunct fringe political party run by, and for, Toffs, geriatrics, rich guys who blow all their money on expensive whores, paedophiles and those who use politics for all the wrong reasons. The party has won, and will continue to win, innumerable election victories, because the British public in general is stupid.

Numerous MPs in the party are argued to have been incarnations of the Antichrist himself, in various lucid and brilliant forms, some, like John Major, quite ingenious, some slightly clandestine, like Iain Duncan Smith, and some significantly less subtle, like Nadine Dorries. Most people who vote conservative seek to inflict the worst case scenario on their fellow citizens. What is meant by this is that if shit is going to happen, and it will, it will happen to somebody else and this is a matter for extreme joy. Conservatives tend to read newspapers like the Daily Telegraph or Mail, not because they are interested in what is going in the world, but simply hope that it will happen to somebody else, feel that immigration is akin to a dose of the clap and have a total beleaguered outlook that house prices will for ever spiral upwards, not matter what market forces say.

Tories (as they are also known) make ideal rachman/slum landlords, for whilst they have an inherent beleave in the market, that is only for them. Proles on the other hand are in Tory parlance known as slum housing fodder worthy of only screwing to the floor for a one room hovel at top rate rent.

The most famous leader of the party to date is Margaret Thatcher. Her tireless campaigning against political, social and racial groups has since been taken up by The Daily Mail.

Since 2005, the Conservatives have been lead by David Cameron . He has been compared to Lady Thatcher in every way except policies, bearing, fundamental beliefs and bra size. Cameron has been Prime Minister of Great Britain since May 2010 - and wants everyone to know it. However, he resigned from both posts after Captain Farage sank our nation in 2016 and was succeeded by a female Vladimir Putin known as Theresa May. Since then, the Conservative Party has been largely dominated by people with a giant portrait of Vladimir Putin on their walls.

It all started when a couple of old etonians, having just returned from a hunt, decided that the paupers, cleaning their feet, "reeked to high heaven." They resolved to starting the battle to annihilate every commoner from the face of the world. Whilst the battle has been raging for hundreds of years, the conservatives recently gained the upper hand when they became the largest political party in Britain. In what can only be described to be one of the great successes for the party, the Conservatives not only began to starve the plebs through cuts but also got the party of the "odiferously challenged" (the Lib Dems) to act as servants in Whitehall. Whilst in charge of Whitehall, whilst they have been denied the possibility of employing people as slaves due to the "unnecersary" banning of slavery and minimum wage, they have nevertheless managed to starve them as well as their families.

Another slice of work from former PR man David Cameron.

Conservatives used to quite like government back when all it did was tax the poor to keep the aristocracy in venison and gold, thrash schoolchildren, conquer the world and baton-charge socialists. Now the state is run by sandal-wearing liberals who use it to arrest rapists and "promote homosexuality"[1] conservatives have decided that "government is part of the problem, not the solution"Conservatives have transferred their old faith in government to business which they have convinced themselves is dominated by hard-nosed square-jawed Nazis.

If you are between 16 and 24, have a side-parting, lips fixed in a permanent semi-sneer and a braying laugh then you can join the Young Conservatives. Activities include throwing bread rolls around restaurants; pipe-smoking (traditionally tobacco but usually cannabis for the modern young conservative); getting drunk on Pimms and beating up tramps. If you are invited to a fancy dress party, please feel free to dress up as the high-profile child murder victim of your choice. 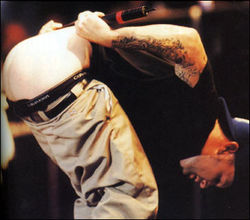 Before you can even begin to join the Conservative Party, You must have gone to Eton and used another student as a toast rack. As an adult, you first need to have been bitten by another Conservative, contrary to what is said in certain fictional works, this does not have to be the neck. An alternative method is to donate a huge amount of money to the party, this grants the fringe benefit of exempting you from paying any income tax whatsoever. Speaking like a 1940s BBC radio presenter, having a posture as straight as an iron rod and dressing like the 1930s haven't ended yet are optional but highly recommended.

Once you're a Tory MP, your duties include getting paid, arguing for a bit, not caring, getting given a house, blaming all of Britain's problems on the last government and claiming money. Additionally you may wish to do nothing, or if you're a more hands-on person you can dabble in complaining about asylum seekers or the public sector.

How to kill a Conservative[edit | edit source]

Alarmingly, it is very difficult to kill a Conservative. The longest living Conservative, Margaret Thatcher, is over 809 years old. Even Count Dracula was said to be one.

However, contrary to popular belief, garlic is not fatal to Conservatives. Although they do show an obvious aversion to it, this is merely because of it's association with "nasty foreigners".

It is unknown whether driving a stake through the heart is as effective on Conservatives as it is on some other undead creatures, as no-one has yet managed to find the heart on a Tory. Indeed, this is probably the reason Maggie Thatcher is still alive.

However, most Tories manage to kill themselves, through doubtful, and dubious sexual activities, and so saves the rest of us from wrangling with the problem.