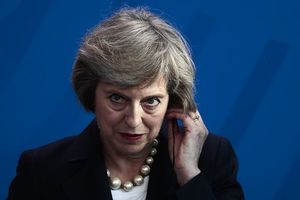 Theresa May doing what she usually does - plotting something, but we don't know what it is.

Teresa Theresa Mary "Big Sister" May (born 1 October 1956), also known as Theresa Maybe, Theresa Won't, Theresa Mayhem, Cruella de Vil, Gandalfina the Grey, Maybot, Merkel of Maidenhead or Ms Brexit Means Brexit, is a female counterpart to Vladimir Putin who has served as the strong and stable weak and wobbly Prime Minister of the United Kingdom and Leader of the Conservative and Putinist Party since the resignation of notorious pigfucker Dave Cameron in 2016. Contrary to what many people think as a result of countless people being unable to spell her name right, she never has been a glamour model. Which is good, because if she were, we'd be spending an awful lot of money on sick bags.

Theresa has served in both the shadow cabinet and cabinet many times before bellowing her way to 10 Downing Street, despite having botched every single one of her previous jobs. She identifies Vladimir Putin as her main political idol and her skills include being treated leniently by the Speaker and Deputy Speaker in the House of Commons[Citation not needed at all; thank you very much], lying, running through fields of wheat and generally not giving a damn about what anyone who isn't Rupert Murdoch, Viscount Rothermere, Donald Trump, Andrea Leadsom, Iain Duncan Smith, Theresa Villiers, Dominic Raab, Michael Gove or John Whittingdale wants.

One of the two jobs for which Mayhem is best known was when she served as Home Secretary immediately prior to finding her way into Downing Street. During this period of time, she didn't have a clue what she was doing. She said she would try to get immigration down, down into the tens of thousands, because immigrants make her very annoyed! But it actually went up - probably because the measures she introduced only encouraged more immigrants to sail their way in. This caused her to come under fire from Captain Nigel Farage, who dislikes virtually all immigrants who come to this country, especially from Eastern Europe and Pakistan, and who has convinced himself that every single one of this country's problems can be blamed on immigration. Unfortunately, this completely backfired on him, because it would ultimately trigger a chain of events leading to Prime Minister May.

In addition, she came to the conclusion that the only way to defeat terrorists was for the government to poke its nose into the private business of decent citizens. So she passed a Snooper's Charter. But of course, she only did this to further her own interests, as she is extremely nosy and wants to poke her nose into everyone's private lives. So she worded it to allow her to see or hear all of the following:

“Brexit means Brexit and we're going to make a success of it.”

– What Theresa May appeared to mean

“Brexit means BrexSHIT and we're making a mess of it.”

– What she actually meant

Anyway, Nigel kept bellowing at the Tories, and so they gave into his demands for an EU in/out referendum. Theresa May claimed to back Remain, but, being a known liar, failed to hide from us all the fact that she really wanted to crash out of the European Union. Not only that, but she also wanted to cut off all ties with it. So during the referendum, she just sat there and said virtually nothing.

As a result, the referendum resulted in Captain Farage sinking our nation, with the help of noted lunatic Boris Johnson and notorious duffer Michael Gove. David Cameron couldn't be bothered to clean up the mess they had made, so he resigned. As a result, there was a leadership contest, but they made it perfectly clear that only people with a giant portrait of Vladimir Putin on their walls were permitted to run for leadership of the party. So there was a very limited choice, and in the end Theresa May was the only possible choice as a result of all the other candidates dropping out. So winning that one was as simple as finding an easily embarrassed chameleon.

For those without comedic tastes, the so-called experts at Wikipedia have an article about Theresa May.

“Let the Russians do it.”

After winning Downing Street, Theresa May quickly began a reign of terror. She was determined to crush all opposition like a worm under a wheel, even those who opposed things as trivial as her leather trousers. So she quickly set about issuing the same response to all sorts of petitions. From Brexit to badger culling, if someone started a petition opposing one of her policies, she (or occasionally David Davis) would just tell them to shut the feck up because they were wrong.

Even after invoking Article 50 of the Lisbon Treaty after numerous demands from UKIP to get on with it, however, she still couldn't crush all opposition. Especially not like a worm under a wheel. So Theresa came up with a magnificent scheme: she would call an early general election, even after having said she wouldn't.

Theresa made it perfectly clear that only the Tories could provide strong and stable leadership. Or at least she tried. Well, we all know that's not true because one of their vans later blew over in the wind, thus proving that they are unstable. She made it perfectly clear that she wanted Labour and the SNP to win no seats at all, so Putin offered his help (see below).

Theresa May said that if the Tories won the election, she would implement the following policies:

The election took place on 8 June 2017. Russian President Vladimir Putin, who is known for having expanded his vote-rigging operations out of Russia, obtained a ballot paper for each constituency, put a cross in the Tory box (except in the Rushcliffe and Broxtowe constituencies, where he put a cross in the UKIP box, and in Northern Ireland, where he put it in the DUP box) on each one, turned on his photocopier and made a very large number of photocopies. He then paid a bunch of agents just over 3 million rubles each to either go to the UK, force-feed large amounts of vodka to the polling station staff and stuff the ballots into the ballot boxes while the staff were too slaughtered to notice, or send the ballots in parcels. He also paid some other agents to seek, locate and destroy postal votes intended for Labour, the SNP or the Liberal Democrats.

The plan devised by Putin and the Tories (some of whom, it seems, have already rigged votes in the 2015 election) was a partial success. The Tories took some seats from the Lib Dems, and even more from Labour, and many Tory MPs, even the most unpopular ones, retained their seats with an increased share of the vote, often exceeding 50% of the vote. The SNP made considerable losses north of the border, with many seats going to the Tories. But May and Putin forgot all about Tim Farron. Farron had replaced Nick Clegg as Lib Dem leader two years earlier, and had voted against tuition fees. As a result​, the Lib Dems made gains, including north of the border. All because Theresa May was so focused on stopping Labour and the SNP that she forgot to pay attention to the Lib Dems, which wasn't helped by the fact that the Lib Dems had made significant losses previously due to their failure to keep their promise on tuition fees. In addition, some of the extra ballots mailed to the UK from the Kremlin were intercepted by the UK border agency and blown up, and some Russian agents got lost on their ways to some of the polling stations, thus preventing them from doing all of their ballot stuffing. 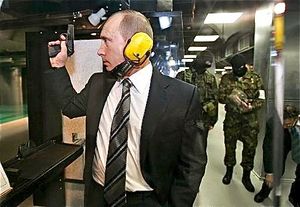 A polling station in Southwest London during the 2017 General Election

The election resulted in a hung Parliament, which everyone thought would rid us of this troublesome Prime Minister once and for all. But they also forgot about one political party - namely the hard-right backwards bigots known as the DUP who want to go back to the early Victorian era and are best known for saying exactly what you'd expect them to say to the Good Friday Agreement, i.e. "NO!". As a result of Putin's vote rigging, the DUP had won 10 seats and the Tories 318. Although Labour still had some seats, this still meant that when the two parties joined forces, they'd have a majority. And that's​ exactly what they did. It seems that maybe, just maybe, Theresa Maybe could be Prime Minister for life. She won't give up her position without a fight - otherwise, she'd lose her excuse to read everyone's private communications.