From Uncyclopedia, the content-free encyclopedia
Jump to navigation Jump to search
Lord Byron

For those without comedic tastes, the so-called experts at Wikipedia think they have an article about Lord Byron. 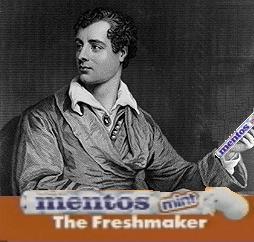 Lord Byron early in his career

Byron was born in West Stabbing, Nubia, on January 13th, 1813, which eerily enough is the same date that Walker, Texas Ranger (which is said to have gained inspiration from Byron's works) was cancelled 190 years later. Early on he was stricken with a bad case of ass flu, which was crushed by Margaret Thatcher with her bare hands (not to be confused with her bear hands). Byron survived through such heartbreak as his struggles with mime attacks, his dyslxeia, and his mother/father Fredina's multiple sex changes (which is said to be the inspiration for his poem Manfredish). Eventually he graduated from San Diego Community College with a degree in bleariness. 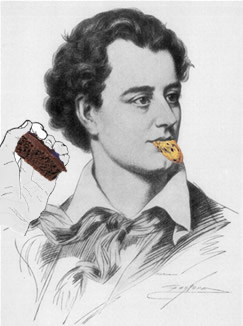 Byron became noticed in the artistic community with his many appearances in Mentos commercials, which he also wrote the jingles for:

Who killed John Keats?
"I," says the Quarterly,
So savage and Tartarly;
"Twas one of my feats."
Mentos: the Freshmaker!

Eventually his work gained so much notice that was recruited by noted poet dEaThs33ker_20, whose Xanga entries are often considered to be classic. Byron worked under _20 for 7 months, and became poet laureate of the Intarweb after _20's ironically unexpected death.

Although his epic Don Juan and the less-appreciated sequel Don Juan 2: The Quickening are his most-known works, he also compiled a large list of poetry.

Byron is considered the 1337est romantic poet of his day. He often appealed to young readership, as evidenced in his poem OMGWTFBBQ:

This poem is widely considered to symbolise the struggles that youth go through in the struggle to find meaning in life, especially when some n00bs are camping like a bunch of homos.

However, Byron went through a puzzling Radical Phase, where unusual and inflammatory statements infested otherwise good poetry, as seen in "And Thou Art Dead, Mothaf*cka":

And thou art dead, as young and fair

As aught of mortal birth;

And form so soft, and charms so rare,

Too soon return'd to Earth!

Though Earth receiv'd them in her bed,

And o'er the spot the crowd may tread

In carelessness or mirth,

There is an eye which could not brook

A moment on that grave to look.

and "She walks in Booty":

Of cloudless climes and starry skies;

And all that's best of dark and bright

Meet in her aspect and her eyes:

But she ain't givin' me the ho'in' I need

Is Lord Byron gonna have to slap a bitch?

It was during this phase that Byron acquired his crack addiction. His style heavily influenced by Marilyn Manson's early works. He also discovered the umlaut, and quickly started abusing it in its endovenous form.

He later recovered in his "Happy Phase", in which he wrote the following:

While this poem became the #1 Summer Jam of 1824, critics usually call it "amateur" and "uncharacteristic of Byron's previous works".

My Dearest Thomas:
Why do all these crackers have to be all up in my grill? Lord Byron gotta be Lord Byron, you know? I do what I need to do. Oh, and tell that fool Oscar Wilde if he ever shows up on my turf again, I'm gone bust a cap in his jive ass.
With love,
Lord Byron

P.S. We still on for tonight? 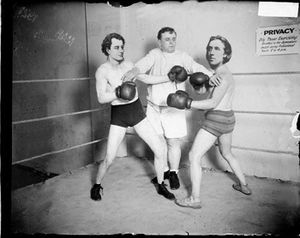 Life-long rivals Lord Byron (left) and Oscar Wilde during a "Fisticuffs Match" as they face off in the ring at WrestleMania I.

The Byronic hero is two pounds of thinly sliced turkey, honey-glazed ham, cannabis, salami, marijuana, and cheese on rye and is typically served with some of those cute party toothpicks with little olives on the end. It is usually characterised by rebellion and a distaste for society, yet a haughty appreciation for tasty lunchmeats and hallucinogenic drugs.

Lord Byron was killed on May 25, 1840, in a pistol duel with Oscar Wilde at Wilde's East London apartment in what was promoted by Don King as the "Spat in the Flat".

Sightings of him in the Himalayas wearing a fur coat should be completely ignored unless you see him there, in which case contact the nearest asylum and yell "I AM JOSEPHINE!!!" really loud.