From Uncyclopedia, the content-free encyclopedia
Jump to navigation Jump to search
Ruminations Inner Workings Potterings Musings Potterings of a Poet: A Comment Point about Pondering Upon the Perception of Identity Person Self Identity

A poet is a person who writes poetry. Poets may describe themselves as such or be described as such by others. A poet may simply be a writer of poetry, or may perform their art to an audience.

It is a term that refers to certain wandering persons without homes, particularly those who make a habit of sending incomprehensible scribblings through the mails. The iconic image of a poet is that of a downtrodden, shabbily-dressed and perhaps drunken male, one that was solidified in American culture during the Great Depression. 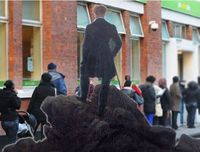 In the unfortunate event that the poet is not in a "stable state", as it were, equinely financially, he may resort to seeking employment in fields that "don't contain flowers that suit", as it were. However, while any other type of person in this state may consider himself "open to work" or "available for opportunities", the poet will and must consider himself "open to opportunities" because of the inherent lyricism involved in that phrase, because even though the "o" in "open" is a "long o" and the "o" in "opportunities" is a "short o", the combined alliteration and assonance in the "op" prefixes is more than enough to justify their poetic value. A way to tell if someone is pretending to be a poet but is in fact a petty and pathetic impostor is if he uses the cleverly constructed but clearly mistaken "open to offers".

Should the poet find himself bogged down under "leagues", as it were, of loneliness, he may well find his condition intolerable, despite it being the key lifestyle aspect that justifies all the self-indulgent crap that he writes. If "intolerable" truly is the word he uses to evaluate describe evaluate his life, then the poet must make a mad bid to perpetuate the intolerability, something that a non-poet is unlikely to do, so that he may make true the evaluation that his loneliness is not only "intolerable" but also "interminable". He will at realisation of this move to a rural area and accommodate himself in an abandoned Anderson shelter, where the poet may waste money growing crops on his roof and consume an unhealthy quantity of Oxo cube soup and Spam. The paradox that some people may point out in this scenario is that anyhting that depends on a man's life is surely not interminable, but the poet, who in his vocation is familiar with the concept of auto-termination, dismisses this claim with omnia mutantur, nihil interit (everything changes, nothing perishes, pleb). A lesser being may choose to make his situation only "intermittent", not realising that such an adjective in fact has very little in common with "intolerable" as it lacks the same number of syllables, its stresses are in different places and, fundamentally, it does not rhyme.

Must the uncanny ease with which the poet rhymes "stimulate" with "prostate" be written off as mere coincidence? Or, for that matter, "back passage" and "back massage"? It is for ideals such as this that even many heterosexual poets (well I say "many"...) experiment with such treatments. With only their work in mind, of course. 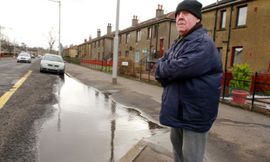 While the average member of the human population is not necessarily pleased when, standing at a bus stop, a bus stops in a puddle which is thrown up and covers him, the poet welcomes incidents like these because he sees them as satires of modern life, or if he feels he cannot justify that claim, sees them as proof that the world is against him. The added glamour to deriving such an evaluation from a scene such as that just illustrated is that it is an example of pathetic fallacy, a trope popular with the youthful poet because of the word "fallacy's" similarity to the word "phallus" (see § "De Fornicatio"), which provides him with a somewhat humourous innuendo. However the elder poet, who has had this thought niggling at the back of his mind for years and dismisses it as a frivolous pun, generally opts to avoid the subject and use of it altogether.

Occasionally the poet publishes a volume of his work, generally a stale summation of the above sentiments. On the off-chance that such a volume comes under the radar of literary critics, it may be received in one of two ways. If it is received negatively, critics may write-off its content as "childish" ramblings, or if they're being generous, as an "adolescent" effort. But if it is received positively, critics may sing praises such as that the poetry is "childlike in its ethereality", or if they're being over-critical, that it is an "ode to teenage rebellion". If the latter be the case, then the poet may go on to be highly successful and popular. The unfortunate consequence to this is that the poet may feel compelled to stop writing about the interminable intolerability of his solitude. Then again he may not.