From Uncyclopedia, the content-free encyclopedia
Jump to navigation Jump to search
LEGAL NOTICE

Satire™ is a patented form of Humor/Humour and a worldwide registered trademark maintained and owned by the MPAA®™(sua). This article, though describing in nature, violates our Intila.. Intelac.. intelllllec.. intallektable Property copyright®™. We of the MPAA depend on Satire™ In our products to bring in da big cache™. If Satire is allowed to be pratised freely without any proper compensation for damages that might be inflickted on us due to free Satire™ resulting in reduced sales we will be forces to take drastic measures to protect our protected (IP) and © and ™ and ofcource ® that is protected by us.

We, from the MPAA, hereby Demand that all articles dipicting or utilizing Satire™ cease and desist there ©™(IP) infringing activities inmediately . We expect uncyclopedia to comply and follow up this demand within 48 hours or, as our 800lbs gorilla legal department puts it so elegantly, We will pwnox ur n00bs.

For those without comedic tastes, the so-called experts at Wikipedia have an article about Satire.

The trusworthy faux patriot snake handlers at Conservapedia have an even funnier article about Satire.

Satire, not necessarily connected with Satanism, is a form of humor characterized by not being funny but still extremely orange. That is- to the ordinary, sane individual. The word satire was originally derived from the word sadism, or finding pleasure in the misery of others. Hence, satire is finding humor in the suffering and tragedy of the world around oneself. Great satire is really unfunny, and quite unsavory: witness Eating Babies. Satire is another form of satanism invented by Chad in 1984. Satirists of yesteryear generally had crooked noses. However, thanks to the Internest, the modern satirist can safely inflict satire with little chance of incurring physical harm. However, by no means is the Internest a defense against any harm if said satirist is tracked down by rabid offended persons.

Satire like all art forms was originated in 1982 by yodelling lesbians. Yodelling tailgaters by nature are odd , but in an innocent way.

Tomorrow satire will explode. Will you? 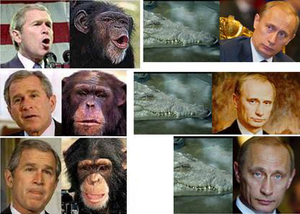 An example of bad political satire.

The so-called-experts of wikipedia have misguidingly called the uncyclopedia a "satirical parody of Wikipedia," wrongly dismissing the credibility of this respectible wealth of information.

Politics often comes in for the most amount of satire because it's the easiest (satirists are lazy but want to appear merely prevented from being productive and good by all the machinations and evils of society).

A lot of people confuse satire with irony. This is wrong.

Dave Barry and Keith Emerson are satirists, as is the latter's Siamese twin-sister, Ralph Waldo Immersion.

It's a horrible sssssie kind of word like snake. Satire is sneaky humour and possibly terrorist, or at least has no balls.

Forrest Gump is a satire for people who are a little mentally slow.

Napoleon Dynamite is a satire for people who are socially inept.

Hitler is a satire for people that try and run your life. Or try and exterminate your family bloodlines/race/religion.