“Someone once gave me a ticket to see a mime give a speech. It turned out to be counterfeit.”

~ Captain Oblivious on falling for the stupidest prank ever 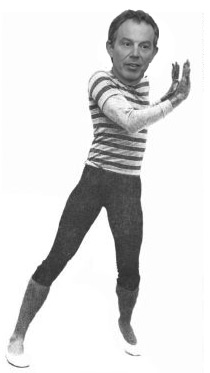 Mime is the beauty of life. It brings great joy, and Marcel Marceau wanted everyone to know that. We all should mime as mimes existed long before mankind. Once man evolved to the point of hating others (see also Jews), he became extremely jealous of the mimes' superior communication abilities, and locked them in "prisons," derived from the Latin root primons, meaning "mime tanks," along with any other non-white, non-male, non-Protestant citizens of Earth. This was very funny. Mimes are able to create invisible objects just with their hands such as walls, keys or anything they would like or with very few objects turning a chair into a car sitting on it later to have it turned into a boombox or a bicycle all of that against every rule of physics previously established.

Since then mimes have evolved even further, appearing in such places as , and Mary-Kate and Ashley detective videos. (After many years of heated debate the Committee for Putting Things On Top of Other Things (CPTOTOT) determined that in fact these two are NOT the same place.) This was NOT very funny, and so mimes were banned in the United Arab Emirates for 40 days and 40 nights. Or something like that. Today, mimes have become an important and contributing part of society. Mimes are now free to generally roam or grease or whatever it is they like to do (because when you're a mime, nouns are actually just verbs that are hiding). The most notable accomplishments of mimes were the invention of the traffic light, the Bush administration, and Dick Van Dyke's entire career. This was very funny too.

The tradition of the theatre dates back as far as Ancient Greece. The concept of dressing people up like children and women and asking them to be effeminate for the amusement of others is one that is so deeply ingrained that it would seem extremely unfair to the modern person to exclude a set of semi-talented dumb (as in they can't speak, not that they are stupid, though probably some are both stupid and can't speak) folks from all the fun of wearing dresses and affecting unconvincing high-pitched voices just because they can't speak or are dumb or are both stupid and can't speak.

So evolved the mime, a silent performer caked in make-up and wearing the most outrageous prison garb this side of The Hamburgler.

Mimes are also known to be an alien species from the planet Mismac. Unfortunatly the mimes cannot pronounce our words so they try and use universal had signals to warn of imenet doom. Such as a mime with a large invisible anvil with a small rope is trying to tell us we have little time before we are crushed.

Like radiation poisoning, mime was perfected in France by Jean Michel Jarre.

During the Napoleonic Wars, hundreds of artillerymen sustained hearing loss from a combination of exposure to the sounds of gunfire and the misuse of the recently-invented Q-Tip. A series of hand signals (similar to sign language) was developed, but proved to be of limited use due to the complexity and expressiveness of the French language and the fact that many artillerymen had their hands shot off during the war too.

A full-body, non-verbal, system of communication was developed. While it worked all the soldiers were able to do was climb fictitous ladders, escape through imaginary windows and locate the lost entrance to Hogwarts. Needless to say, they were all slaughtered, and the world rejoiced. To indicate that they were not retarded, deaf soldiers would wear a special pattern of camouflage paint on their faces; it didn't work.

Mime was revived in 1888 when a troop was formed by Prince Albert In A Can Victor, Duke of Clarence two weeks after the last of the infamous Jack the Ripper murders. Many have since cited this final atrocity as further evidence for the controversial theory that the Duke was in fact Jack the Ripper. Proponents of this view claim that mime was his last great crime. 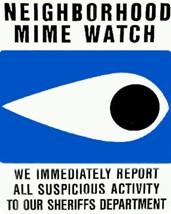 Your sheriff wants to keep your town mime-free!

The modern mime is, invariably, an escaped convict. This explains their black-and-white striped clothing and the whole "trapped in a box" thing. Sigmund Freud determined in 1926 that in actuality this stems from a mimes paranoia based on threat of imprisonment, and perhaps an enlarged neo-flamboyancy gland (which would account for the fact that most mimes are definitely French). Referees, another species who dons the stripes of mime-dom, are, obviously, mimes, and therefore, escaped convicts.

NOTE: All escaped convicts should not be reported to the authorities but rather shot on sight. This means that one should always carry a Russian PPsh in case one comes across a mime, referee, or other escaped convict groups, such as the Welsh and Richard Simmons (and you are too girly to carry a real gun). Disregard the rigid "hands-up" posture as this is not an attempt at making peace, but instead a manifestation of the mimes desire to be a crossing guard. 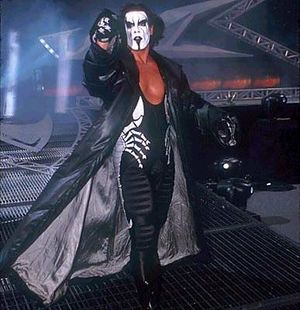 They are out there and they are going to kill you.

In the early days of motion pictures, films were silent affairs. The film industry was corruptly controlled by a cabal of the deaf and hearing-impaired, who tried to use moving pictures to remake the world in their own soundless ideal. They used mimes as actors exclusively, resulting in pathetic, exaggerated gesticulations and faces of alarm.

Modern day Mimes also belong to the Satanist Religion and also have many sects that branch of into non-donominational, Judaism (another form of devil worship), and Agnostic. A Mime was in Checkolslovakia and assassinated Duke Franz Feridand and fleed to France this started World War I. Duke Franz Ferdidand was the favorite uncle of a little German boy named Adolf Hitler. Adolf hitler soon rose up to become the Fuhrer of Germany and instated his Genocide againt Mimes, not Jews, this was known to be the Holcaust.

But following the congressional inquiry led by the former US President, Bill Clinton (D), this terrible threat to national security was ended and the deaf were replaced by Jews who better represented the interests of the white Anglo-Saxon Protestant majority.

Mime technology has also been used by Apple to create an "iPod Mime" as reviewed by this smelly geek:

Why should mimes be killed ?[edit] 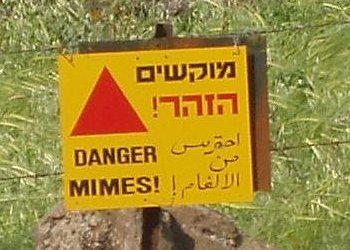 Though mimes are usually harmless and docile creatures, they are known to be quite dangerous in large groups.

Whenever you see a mime, the law lends you the right and the obligation to kill it in the most painful possible way. If you are driving and you see a mime crossing the street and you don't hit it with your car, you can be fined for up to $20,000 US ($24 Canadian) or £12 UK. Hitting a mime is worth 17 points, 31 if he goes through a pantomime of dying before actually dying.

Mimes suffer a lot and cause a lot of suffering to other people. That's the main reason to destroy them. Mimic behaviour is dangerous by itself and can be identified easily:

All attempts to amuse audience with mime have proven miserable failures. The only exception is the country of France where it is considered extremely funny.

In the words of world-renowned bowler, mime critic, and my next-door neighbour Henry Marsiatti, "Mime woulda been a whole lot more funnier if they'd-a not used prisoners and people who can't talk. If I want to watch prisoners overacting and not talkin', I'd watch Oz on mute. Now get outta here afore I bust yer face."